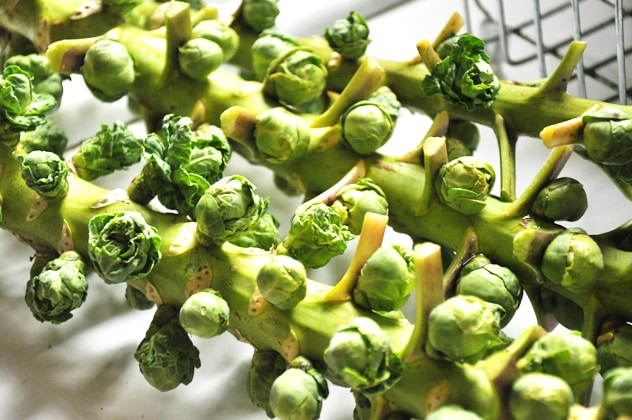 There are few things more gratifying than cooking a meal entirely from things you have grown. This Thanksgiving we spent as much time outdoors collecting ingredients as we did indoors cooking them. 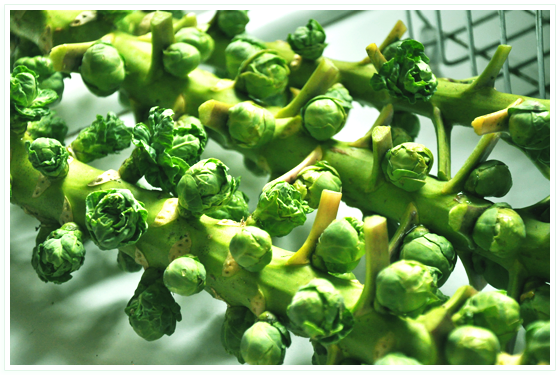 First, we cut these baby brussels sprouts from the garden. They were strange things this year. We waited and waited for them to get large and plump but they never did. So because it was Thanksgiving, we just went for it. 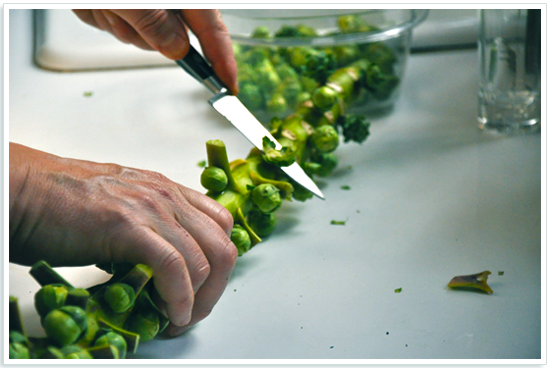 They are rather elegant when they are small like this anyway, don’t you think? 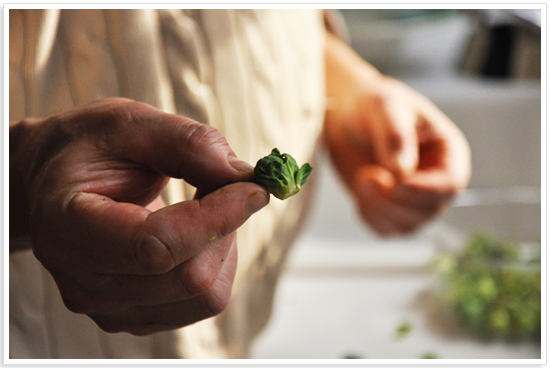 Then there were these peppers. As you recall, I brought these back from France, er… I mean, they are French peppers and I don’t know how they got here. More turned red as they sat on the windowsill and eventually we strung them up. They are leathery and lovely. I will teach you how to string peppers on another day, you will love it. 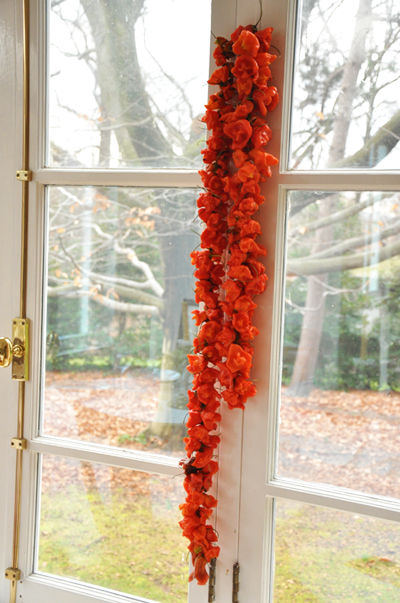 Then there are the green ones which I pickled as you recall. We opened a jar to see how they were and let me tell you… I have not tasted pickled peppers until this moment. They were sweet and sour and prickled the tongue all at once. I am going to subsist on them from now on. 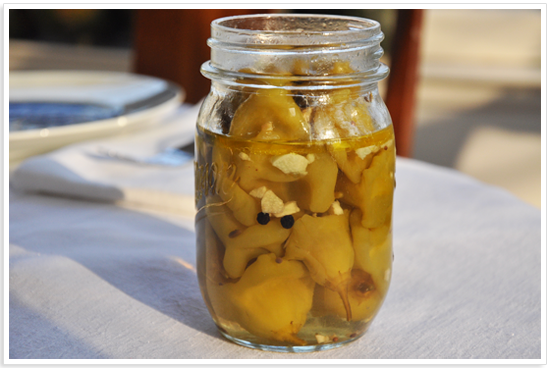 Then I went over to Grandma Pellegrini’s house to see what she had brewing. The chickens followed me in and the cat was very concerned. 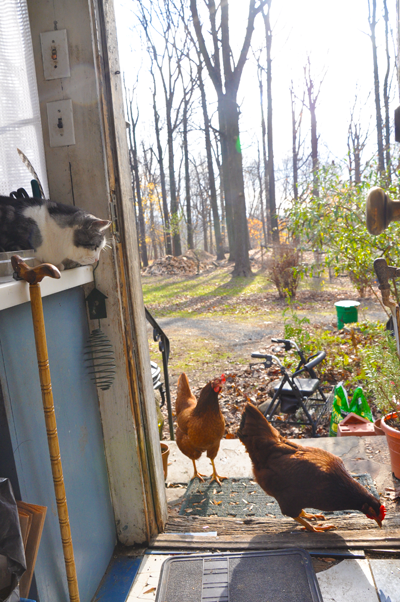 Grandma Pellegrini made cranberry beans that we dried from the garden. I made a recipe a little while ago with bacon but hers was quite lovely also, with just vegetables. She also made some heart shaped corn bread (and corn shaped corn bread!) but we’ll make those together on another day. 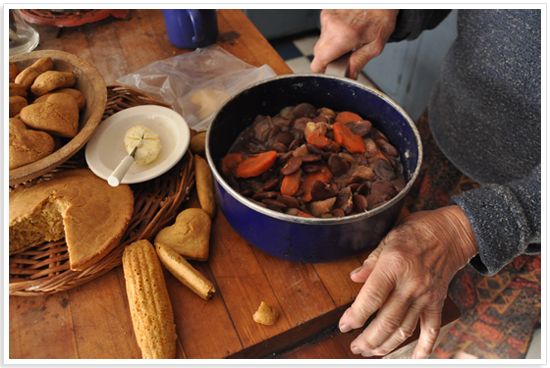 I like a mantle with nice jars of pickled things on it. We have pickled cucumbers from the garden, dried cranberry beans, pickled peppers, and pickled green tomatoes (when the summer weather throws you lemons… well you do what ya gotta do). 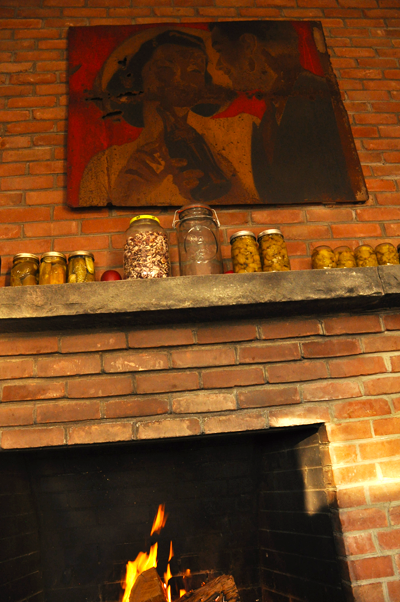 I brought some rosemary back from Grandma’s herb garden outside her kitchen door. She’s got all kinds of interesting things there. Including stevia. And then these spaghetti quash from the garden. These are a fun squash to make… stringy and delicious, particularly with rosemary. 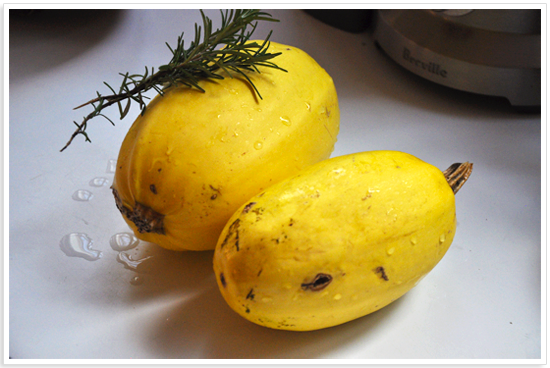 I also added some honey from the honeybees to give it a little boost. 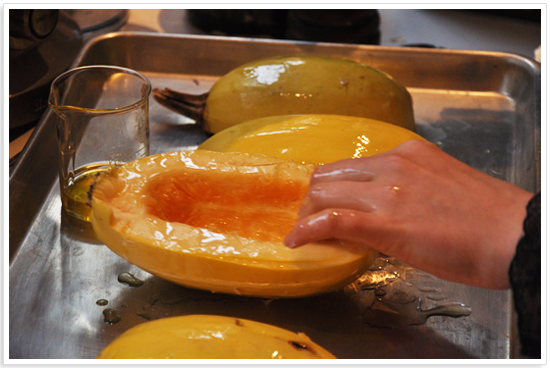 While we did all that, we were serenaded by a tone deaf chorus of Guinea hens. It is not a pretty sound people… and once one starts the others feel compelled to chime in as well. 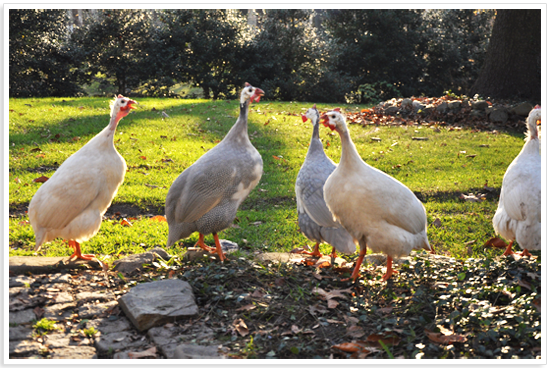 They do have pretty red flaps hanging from their cheeks though. I will give them that. Nice cheek flaps. And not many people can say that. 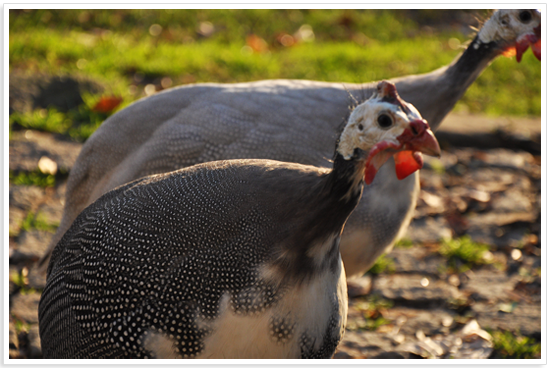 Lucy likes to hang out with them rather than the other chickens. I think it’s a color thing… 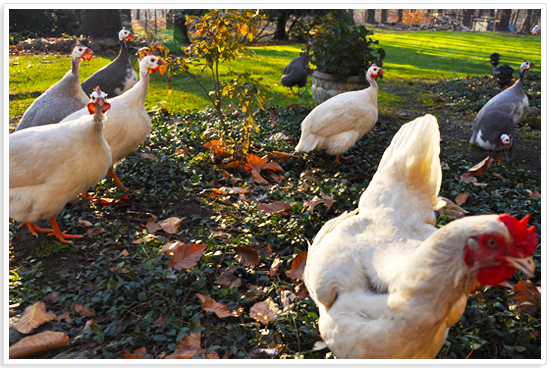 She has a strange beak. And she lays double yolked eggs. She’s just all around “different.” She’s lead an interesting life. 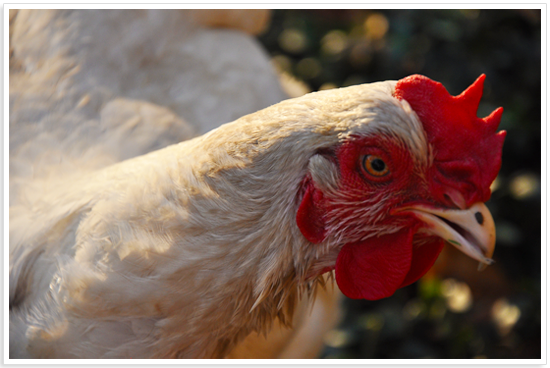 I went to collect the eggs and there were the other girls being exclusive. Chickens really are alarmingly similar to high school girls… lots of cliques and pecking at each other if you look a little too different. 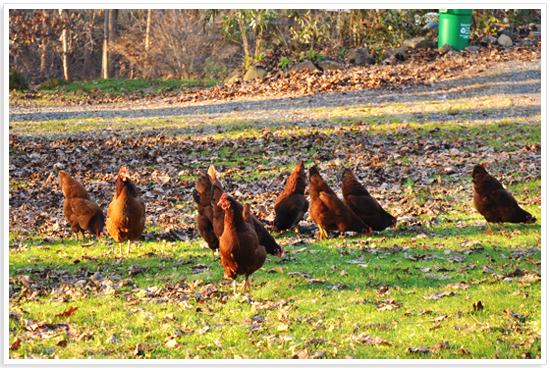 But there were a lot of eggs. Dozens of them. It was a good day. 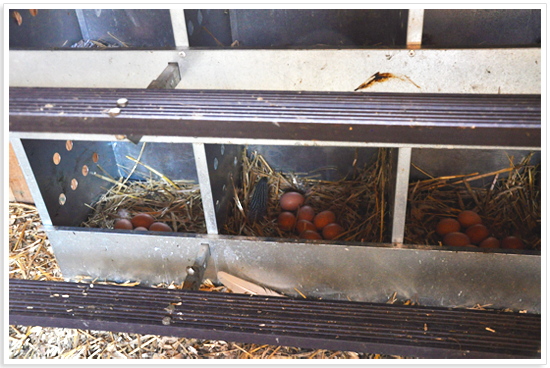 They lived a rather charmed life these chickens. They have a little solar powered door that opens and closes with the sunrise and sunset and a little ramp to walk up and down. 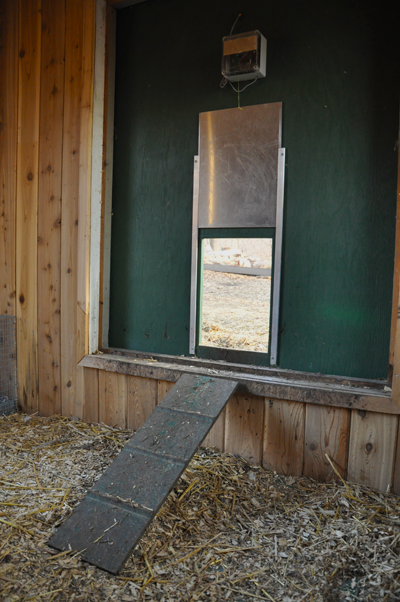 I think they lay about this many almost every day now… I have to start making souffles or something. I think I’ll subsist on eggs and pickled peppers from now on. 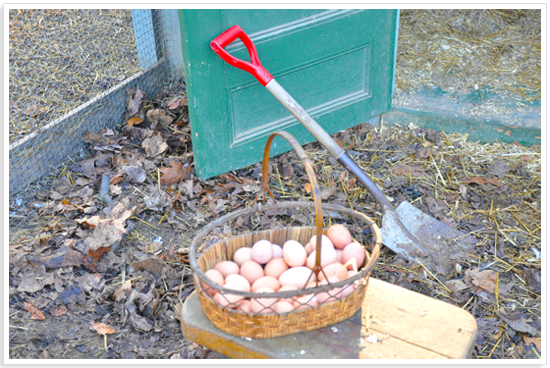 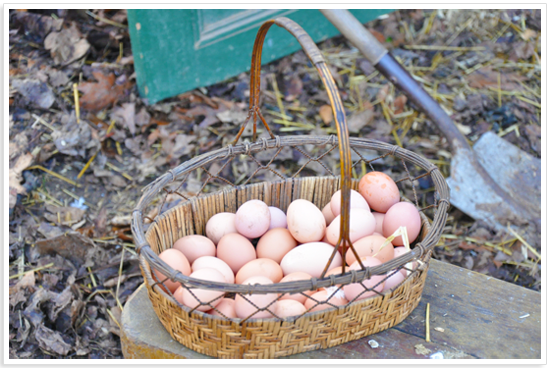 The thing about these chickens is that they will always come home to roost at night, but good luck trying to get them inside their pen before they’re ready. It is a thankless job, which includes running around with a long stick and waving your hands, like so: 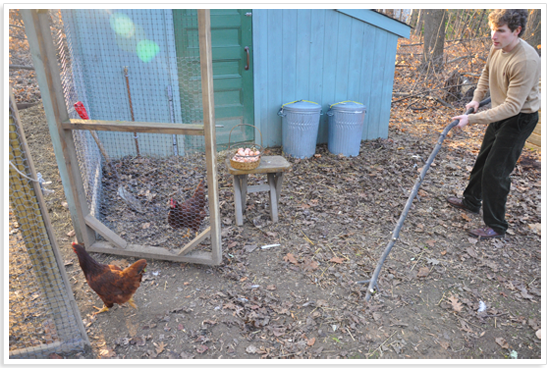 But finally my little bro did get them all in… I opened and shut the door and let him run around in circles. It’s the birth right of the older sibling. 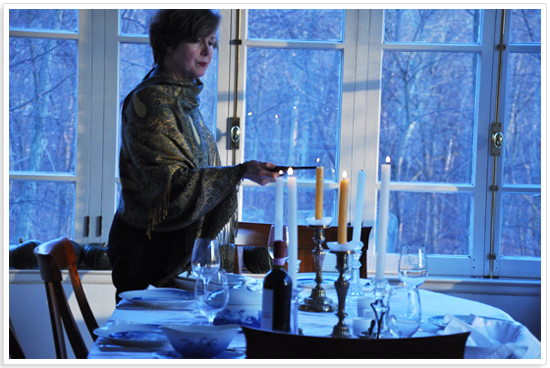 And then we could eat… candles were lit… 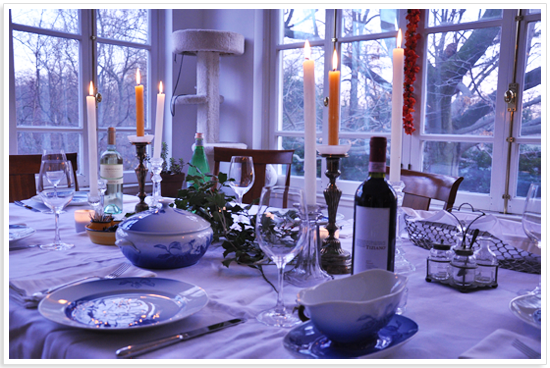 In addition to sriracha, I am also obsessed with candles. Just so you know. Just in case you have a candle factory and want to send me samples. 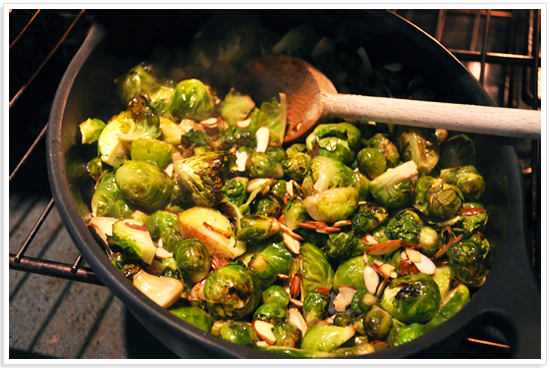 And the baby brussels sprouts were ready. I tossed in some slivered almonds this time. 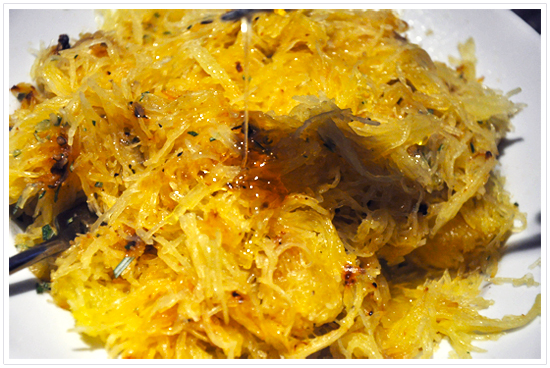 And the “low-carb spaghetti” with honey and rosemary. 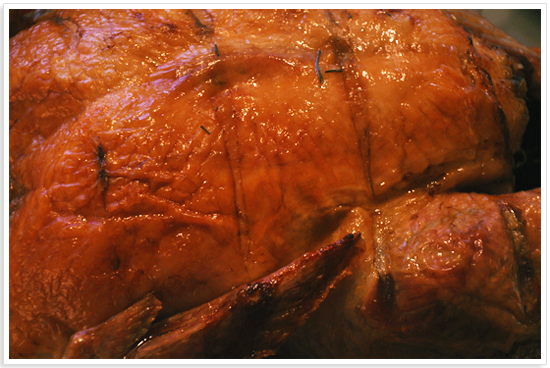 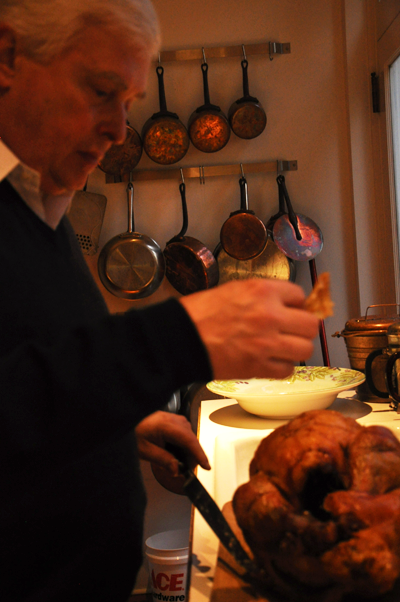 Why do men always carve the turkey? Is it just me or is it something programmed in our DNA that we always have the patriarch do it? Let it be known, I am carving next year!!! Okay? 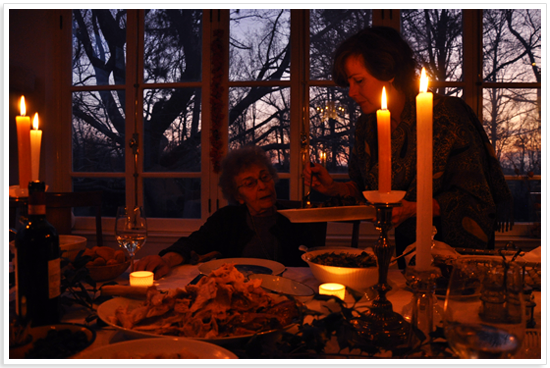 Grandma Pellegrini sat in her chair and was served a bit of everything. 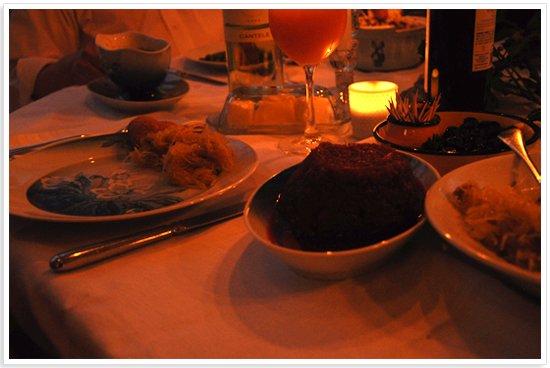 There were many bits to try. And many of them were from the very land that we live on. 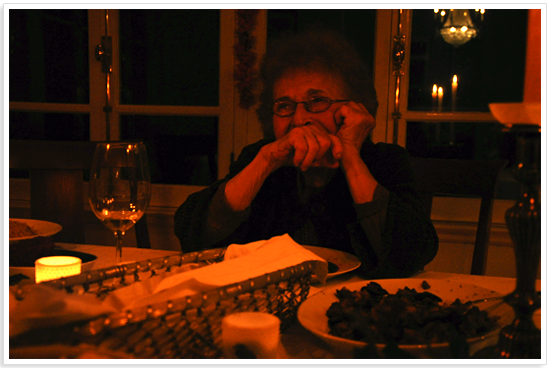 I think that is a very satisfying way to eat.

Guess who didn’t make an appearance on Thanksgiving? Funny how that worked out isn’t it… they must have been busy that day.