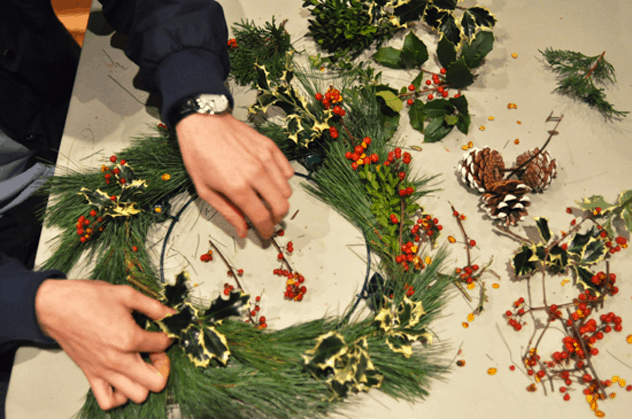 I just had a very Norman Rockwell evening. Warm food and Christmas carol singing and advent wreath making… it began with a church potluck down the road. The same church that every member of my family seems to have gone through…in birth, marriage, or death. It’s a place where everybody knows my name… like on the TV show Cheers but more wholesome. 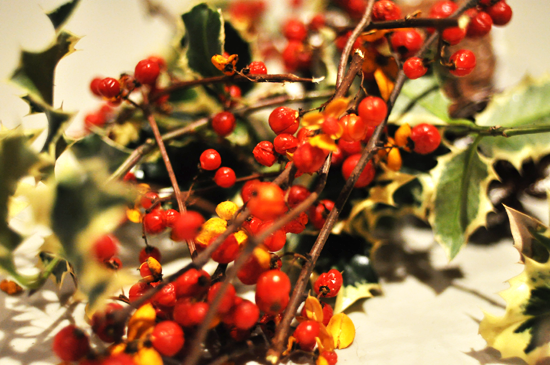 Grandma Pellegrini and I worked all afternoon on some roasted winter squash from the garden for the potluck. And I think it was a success. And then after we finished our church potluck we started the advent wreath making. There were all kinds of festive cuttings from people’s holly and fir trees. 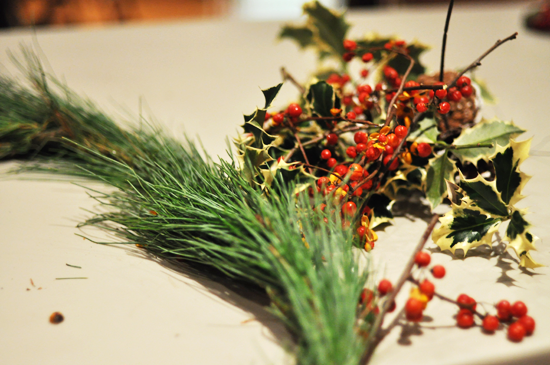 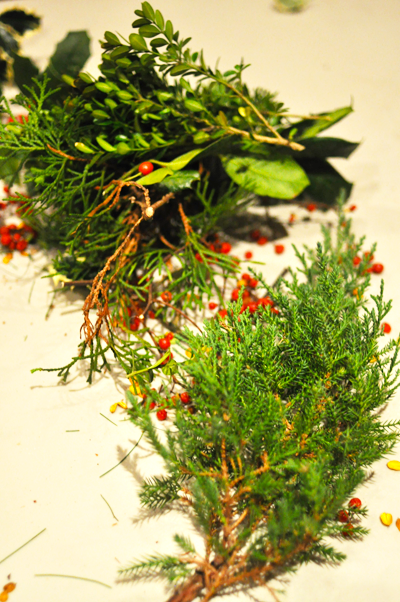 We dabbled in everything, my brother and I. We took it all very seriously. We tend to, it’s just our nature to be hard core when it comes to wreath making. 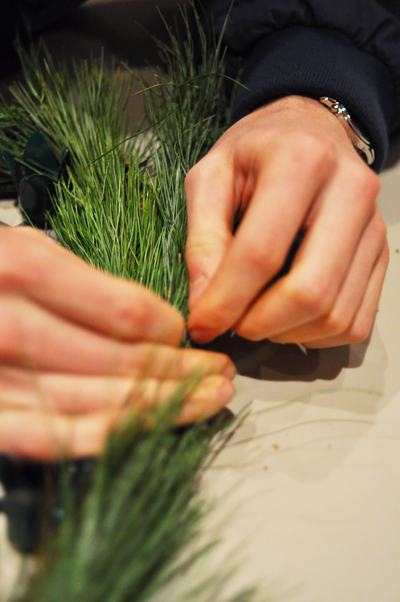 He started by wiring the long pine-needled thing to a metal frame. (Isn’t my terminology elegant? I took a horticulture class in college and everything). 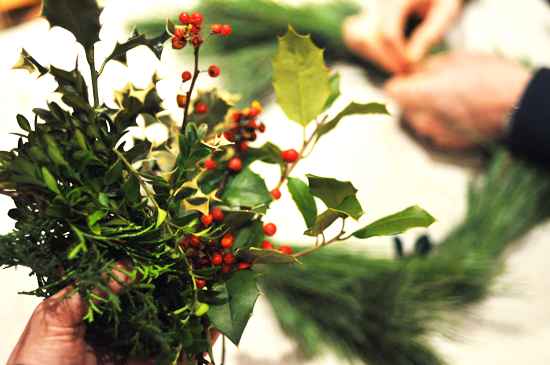 He was very meticulous as he is with most things. I’m much more distracted and big picture. I collected more things while he fastened. 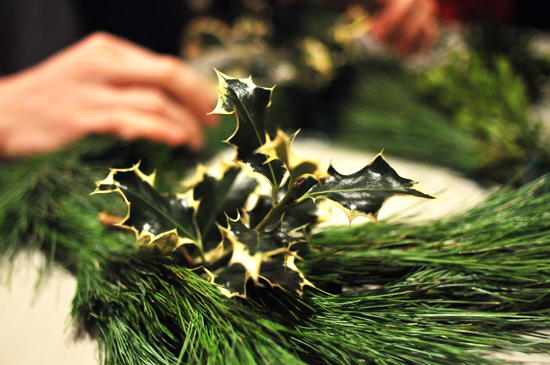 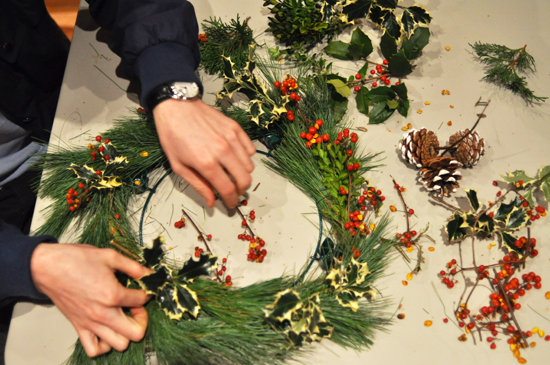 He found a white frosted pine cone. That was a big score. 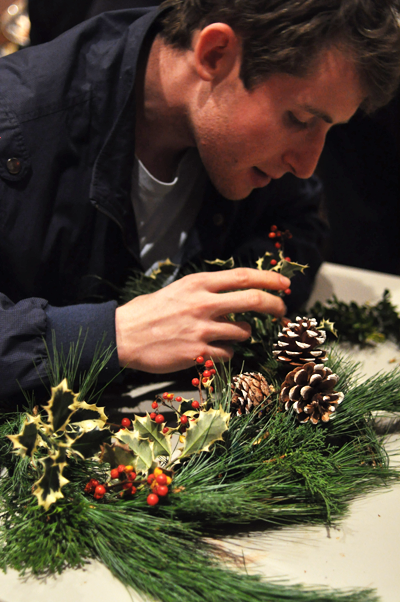 He persevered while I meandered off…(like I said, distracted, big picture…) 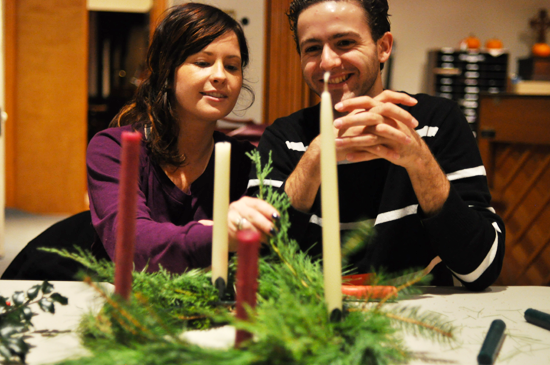 I’ll be honest, there was a bit of healthy competition. His friend Travis at the neighboring table was also vying for “maker of the most glamorous wreath.” 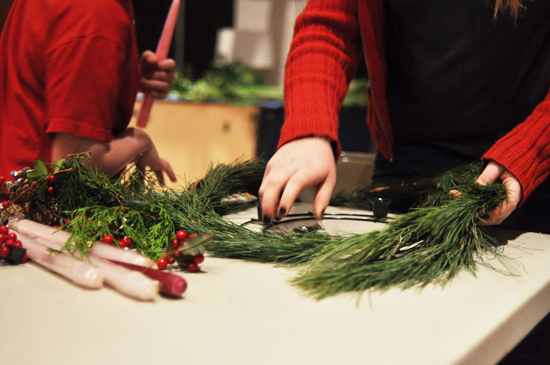 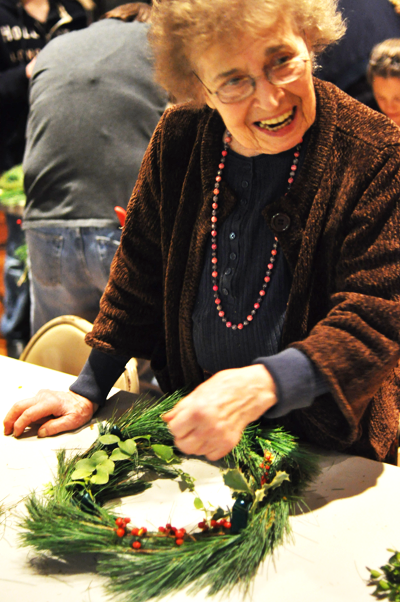 Grandma Pellegrini found this vine-like leaf (another fancy term I learned in college) which she really adored. That was her personal flair. 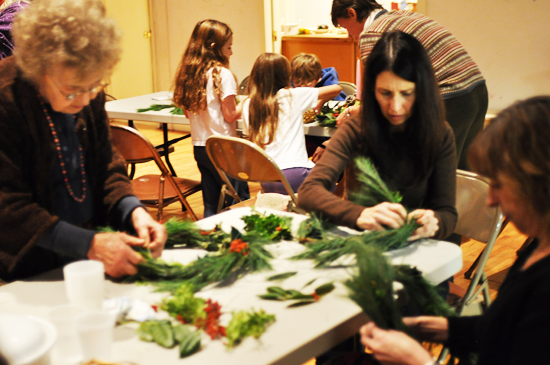 This little guy played the drums on his head with the purple candle sticks. That was his personal flair. 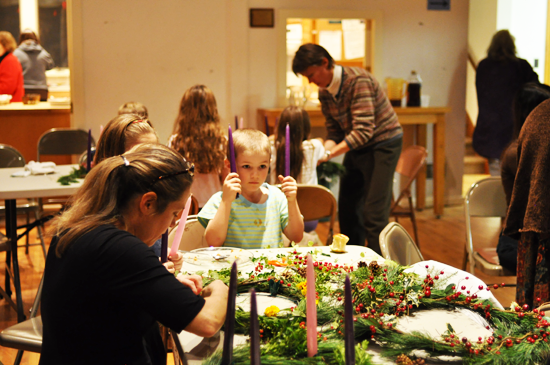 But back at our table, Gordon had the clippers out. He was getting serious. 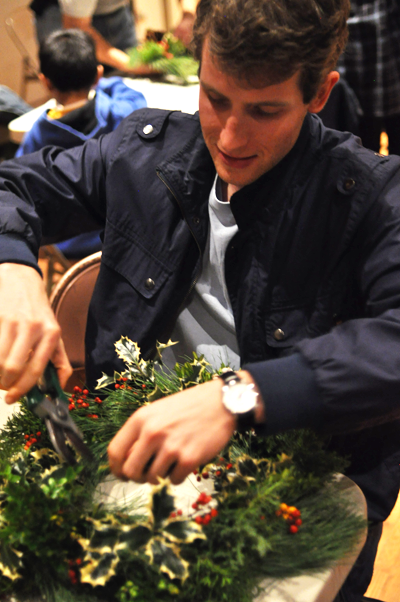 And after a few more snips… look what he produced! 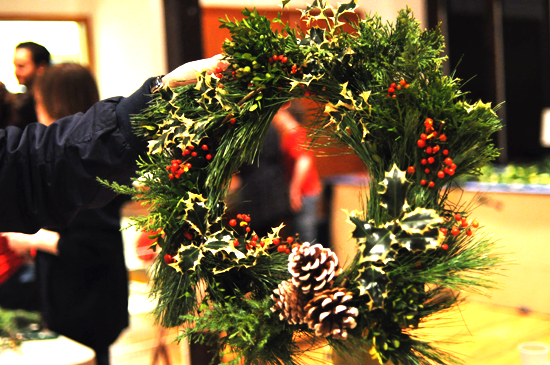 I think it really is a spectacular wreath. Not just because I held the holly. It has lovely proportions. It’s well balanced and elegant and colorful. 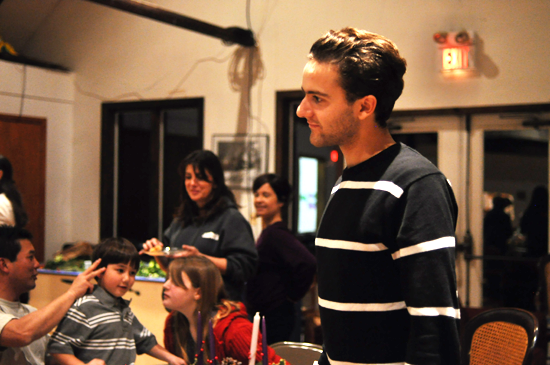 Travis came over to inspect the competition and even he conceded it was indeed a very fine wreath. I was proud of my highly creative little punk brother. 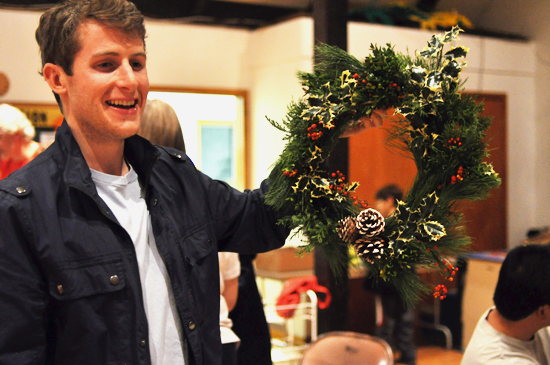 Now… for the caroling. I remember once long ago people used to actually come to our door and sing on winter evenings leading up to Christmas. Does that even happen anymore? Does anyone know? I hope it does, but I haven’t seen it for many years.

But we caroled on this night. 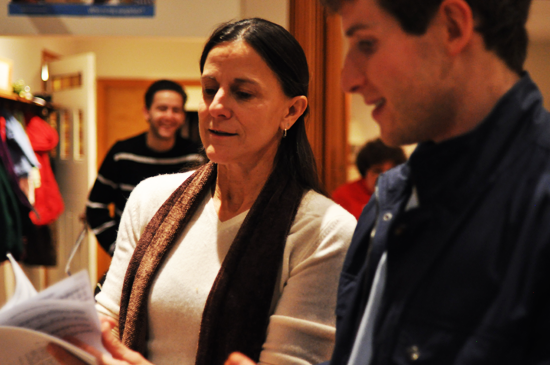 This is Michael Shapiro, our lifelong neighbor. He is a masterful pianist. Masterful. At our Christmas party last year he sat at the piano and played the most beautiful sonata I had ever heard. My mouth was agape. And at the end I asked him what it was called and he said innocently, “Oh, I just made it up as I went along.” I’m still recovering. 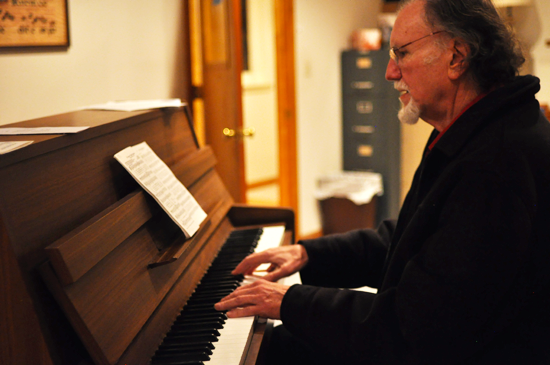 G.P. rocked the carols, what a sport. 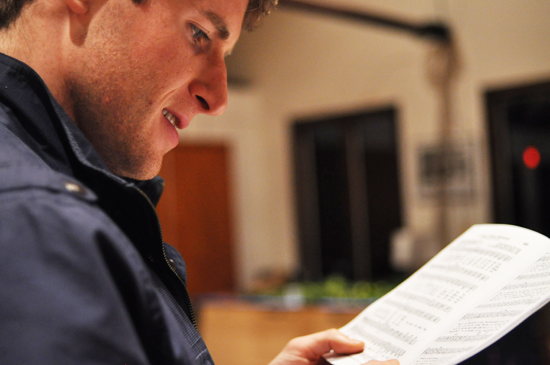 He and Travis reconciled over Joy to the World. 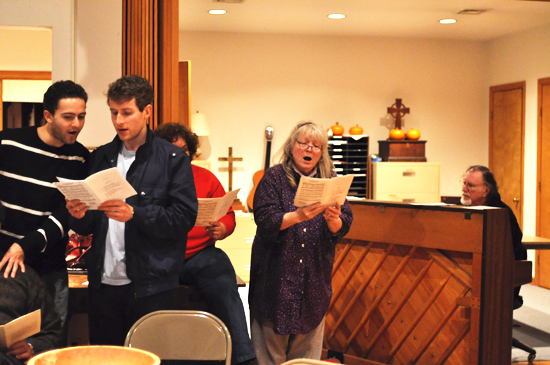 The other G.P. sang also. She’s in the church choir, so she’s a regular. 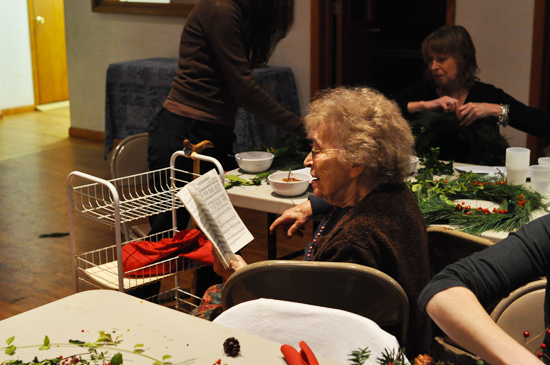 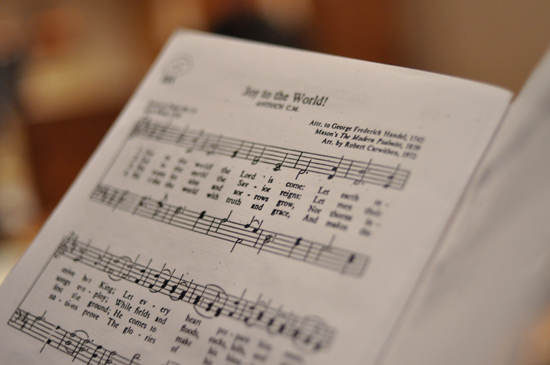 Then the lights went out and the first candle on the first Sunday in advent was lit. 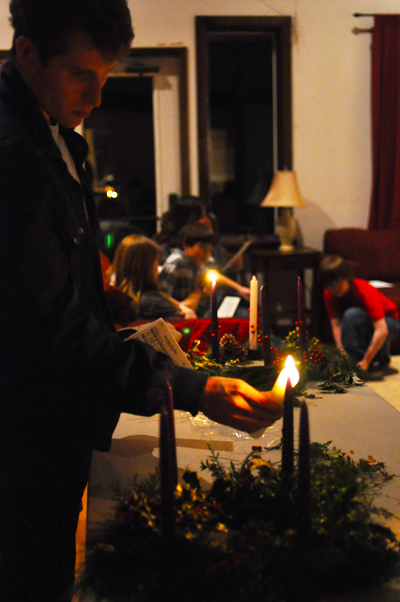 And people passed the candle from one wreath to the next… until every one was lit and the room felt even warmer in spirit. 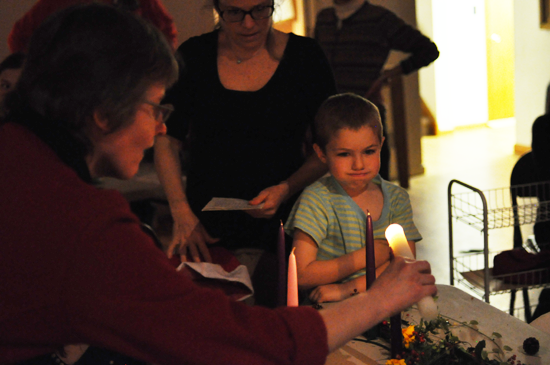 And I decided that everyone could use a Norman Rockwell evening once in a while. It’s a healing thing. 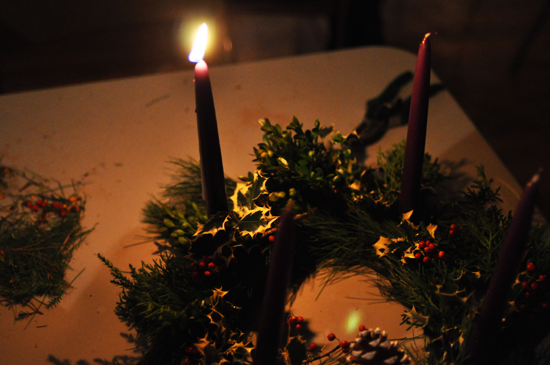