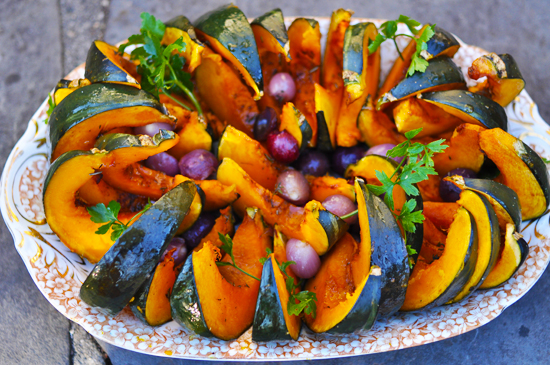 One of the great and glorious things about squash from the garden is that it lasts until long after the garden is dormant for the winter. Right now in fact, there are 12 squash lined up along the windowsill.

Grandma P. needed something tasty to bring to the church potluck a few weeks ago and since I was awfully curious about the flavor of these winter squash, I suggested we make them together. And so…

…we took to the wooden counter in her kitchen and began to slice them open.

The color was brilliant. And they were still very moist inside.

But we had to decide how to cut them so they were best suited for the potluck diners. The kind of manageable size where they could pick them up with their fingers. So we went for thin wedges, like a wedge of melon.

Grandma P. has a very old-fashioned kitchen. She’s got a separate sink just for her kitchen herbs. There is always an interesting plant or two or ten sitting in the sun.

I placed all of the wedges on a sheet tray and coated them well in olive oil.

She also has all kinds of jars filled with various spices. Her favorite is the natural herb sweetener Stevia. She hand labels them in her very distinctive handwriting.

I chose ginger and allspice but so many things would have worked. Cloves…cinnamon…

I knew they would caramelize a bit in the oven and their natural sweetness would come through, but I wanted to give them a little extra boost. Grandma P. suggested Stevia of course but she happened to have a jar of honey from our honeybees sitting there and I couldn’t resist.

Brown sugar or maple syrup would also work, though you only want a little bit. These are supposed to be savory after all.

Next came the herbs. She has several growing on her front steps and in her little herb garden so I (and one of her hearty cats) investigated the rosemary. I picked a few springs as well as some thyme.

She happened to have some small red pearl onions that she’d purchased the day before when I took her shopping at her favorite specialty store Jerry’s. So she blanched them in hot water for a few minutes to help remove the skins and we peeled them together.

Like I always say, color on a plate always makes the food taste better… but man were they a pain to peel!

Then she got the oven going. We decided to start them on high, about 425 F to give them color and then lower it later.

Then she took my camera and snapped a few. She’s a photographer and it’s in her nature I suppose…

She also quite conveniently happened to have vegetable stock sitting on her kitchen counter that she’d make with some leftover vegetable scraps. She’s resourceful. But if you don’t have vegetable stock, water will work. This is to help them steam out a bit and cook evenly. Salt and pepper is a good idea here also.

Then she covered them with foil to help them steam in the beginning.

After they’d steamed for about 30 minutes, I picked the thyme…

…and sprinkled it and the rosemary onto the wedges. We kept the foil off after that to help them brown more. And we turned the oven down to about 325F and they cooked for about 30 minutes more.

While they finished, she prepared the serving plate with a bit of parsley.

She’s always got a necklace on of some sort. I think she has a vast collection…

This is what they looked like when they came out… piping hot, perfectly steamed through, a little brown on the edges, and a little sweet and herby. Here I seasoned them a bit more with salt and pepper.

And in the end, we had a lovely platter of winter squash from the garden which the church goers really enjoyed. 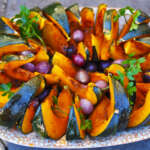