A few weeks ago Grandma Pellegrini sent me an email. Yes, she does email. She also does facebook. It is the dawn of a new era.

She said: “I’m just sitting down to enjoy my soup and my latest triumph in the kitchen.  I decided this morning to put my various cast iron baking pans to good use.   It entailed a major restoration, cleaning, and seasoning.  After several hours of hard labor they were ready , sizzling hot from the oven,  for my corn-bread batter. –Well, it was worth it! I am feasting on corn-sticks (large), mini corn-sticks, and heart-shaped. And… they’re delicious! Now for the clean-up.”

And so when I went for a visit recently, she and I made cornbread. She has these old-school cast iron molds that are so charming, you have no choice but to make cornbread in them.

For a long time, I found a lot of cornbread to be too dry. It seemed like one of those things people ate for survival more than enjoyment — like hardtack on a ship. But then a few years ago a co-worker at a restaurant served up cornbread for family meal and I was forever converted. It was moist and salty and sweet and even a little spicy.

When I was traveling in the south this past year writing my book, I found myself talking to a few farmers in a store lobby. We were talking about food of course, (I need to take up stamp collecting or something), and one farmer leaned in to another and said, “They got yellow cornbread up north” The second farmer looked stunned. I couldn’t imagine what other kind of cornbread there would be… but as it turns out, they make white cornbread in the south… well at least they do in the mountains of east Tennessee, those farmers who loiter in smoked ham shops.

But because as much as I try, I’ll always be a northerner, Grandma P. and I made yellow corn bread…

…but because we’re hip and cool, we added semolina.

Then the yellow corn meal.

Then the baking soda.

Then some corn kernels for a little texture. I think texture is almost as important as taste… and often overlooked.

So is color. Color on a plate always makes the food taste better.

And in this case, these red hot peppers also turned things up a notch and gave it a spicy kick.

And eggs and cream. Yes, this cornbread will be moist.

And then a dash of honey from our honeybees.

One thing about cornbread is that the pan you’re cooking it in should be very hot before you add the corn mixture. So if you’re using cast iron, you’ll want to have it heating in the oven while you’re preparing your ingredients.

Then you pull them out briefly… and add butter.

Lots and lots of butter.

Make sure the butter coats all sides, a pastry brush will help with that.

Then you pour out the excess butter into the corn mixture, so it’s not too greasy.

And give it a good mix.

Then you fill each mold to the top but not much over the top since it will rise.

I wanted to have a few different shapes so I didn’t fill all of the molds.

And sooon… they will be brown and crusty.

And then onto a wire rack to help them cool.

And because Grandma P. is the master of presentation, she arranged a butter dish and a dainty knife…

And we sat down for some very moist, crunchy, spicy, crusty, warm, yellow corn bread.

p.s. This is my favorite corner of Grandma Pellegrini’s house. 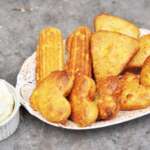