There once was a woman named Virginia Elizabeth Williams Gray. People called her “Jennie” Gray back in the 1800’s. 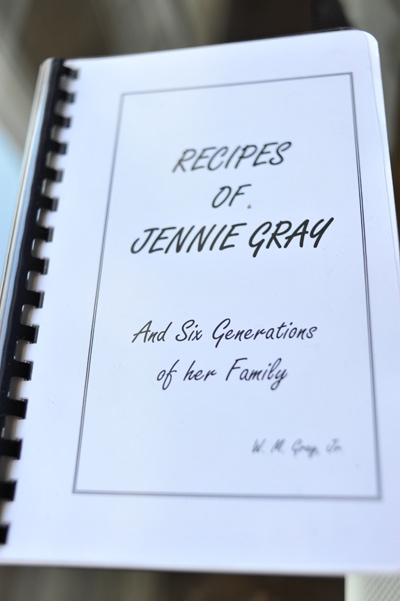 Thanks to her grandson, my grandmother’s counsin, my… second cousin? Well anyway, thanks to Bill Gray in Fort Worth, Texas, the latest addition has just been completed and arrived at my door not too long ago.

Jennie Gray started in Memphis, Tennessee but married and ended up in Caldwell, Texas, then Houston, Texas. Many of her descendent still live there. And it probably explains my proclivity for the south.

It is wonderful in many ways, but I like is especially because it ties me to family members I haven’t even met before and gives me a little peek into their lives… well, their kitchen, but to me that is their lives! It also gives me a pang of nostalgia… a little trinket from family members who have passed but left delicious recipes behind. Those are like gold to me.

Bill included the two prefaces from the previous books which is remarkable. The first was done before computers and as Bill points out, “was probably typed on stencils, each two pages of her book would have been attached to the drum of the mimeograph machine, charged with black ink and cranked, possibly by hand, as the paper was fed.”

Is that dedication or what? Just to keep the family recipes well dispersed…

Jennie Gray’s pickles. Now, any pickle from the late 1800’s is a pickle worth trying. They even have an intriguing name — “Golden Glow Pickles.”

And look! Next to it is a mention of my great-grandmother’s brown bread. Remember how much her mother talked about it in her recipe book?

And then there are just plain wonderful crowd pleasing favorites like Oatmeal Cookies and Reese’s Peanut Butter Bars.

And microwave peanut brittle! I love it.

Ground nut soup, by a six year old. I also love it.

Cowboy pancakes by another six year old. I have to meet these children.

Cinnamon rolls. I would love a cinnamon roll right now. I can’t think of another thing that looks quite as appetizing as a sticky, glossy cinnamon roll. And I don’t even have a sweet tooth.

Spiced Tea. That sounds southern to me also… like swinging on a white porch on a sweaty summers day in a tumbleweed town, circa 1905… over the top, but I can just tell.

And sure enough, Grandma P. has many contributions to the book over the years. This is one of my favorites. There’s something about the terra cotta color of salmon mousse…

And one of the best parts… there aren’t just edible recipes, there’s a recipe for Play Dough for example. In case you have grandchildren to entertain and need to whip up some entertainment real quick… I have a feeling, knowing Doris and the kind of grandmother she is, she’s probably done this a time or two.

And her husband, in the same spirit, added riddles to the end of the book… his personal seal on a masterful work he put together.

Can you answer these?

How many of Mary Virginia’s cookies are in the cookie jar if all of them but two are sugar cookies, all are chocolate chip except two, and all are ginger snap cookies except two?

Eddie and Mar are elk hunting in Colorado. The last morning, the grub was gone except for three stale biscuits. They each ate one and Mark beat his dad to the last one. Mark being a fair minded (but very clever) son, asked his dad “Will I eat the last biscuit?”, “and if you can answer that question correctly, I’ll give you the biscuit uneaten.”

Eddie pondered the question and decided there was only one wat to answer. He chuckled and replied, “You’re gonna eat the last biscuit.”

And then comes a wonderful family tree to explain the many branches produced by Jennie, the trunk.

I encourage you all to start this tradition this year! Your great-great grandchildren will thank you for it. And who knows, they may even write about it on their little blog…