I’ve been keeping secrets from you.

This is the woman who is responsible for my love of food: 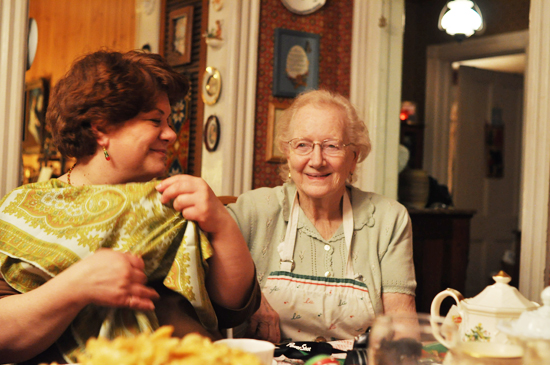 She took care of me when I was young. She would pick me up from nursery school and bring me to her house and sit me at the end of her long wooden table so I could watch her cook. She cooked every day. She still does. And every day after nursery school she made me one of two things: pastina with butter, or broccoli with cheese. I can still taste them. The memory still nourishes my soul.

She has so many food traditions that I probably couldn’t list them all. I guess you could say she was my first food hero.

But one of my favorite food traditions happens on New Year’s Eve every year. She makes thin crust pizza. Rather she makes many many thin crust pizzas. They are so thin and delicate and crispy and delicious that I often eat about three pies myself by the end of the night. It’s marvelous.

I didn’t make it there on New Year’s Eve this year. But, she gave me her crust recipe so that I could try to make it myself.

And so I tried. And I did a pretty good job. But it’s never the same as hers. It never will be.

Here’s how it went…

There are really very few ingredients you need for a crust.

The main thing is yeast.

You add a pinch of sugar and then some water to activate it.

It grows and bubbles.

Then in another bowl you add flour and salt.

A bit of olive oil.

Then you add the yeast mixture.

And give it a nice stir.

Then comes the water.

And you mix until you have a uniform dough, like so…

Then I covered it with a damp towel and let it rise. I just had a feeling that the moisture would help things out a bit.

And if you take a peek, you can watch it rising. It took quite a while though. I actually went on a hike!

But once I was back and fully exercised and ready to eat a whole pizza myself, I floured my work surface.

I actually decided to make it into a permanent pizza making station and keep the flour there always. Is that weird?

I greased my baking sheet with a little olive oil and brushed it on.

Some people use pizza stones. And some people have those round pizza pans. I do not. And she uses these square ones as well and they work perfectly. So I went square.

Then you roll out your dough.

You want to use a lot of flour because it’s a sticky beast. Extra points if you use Wondra flour.

You can also stretch it a bit once it’s in the pan. It’s very forgiving, it really is. We’re going very thin here remember.

Then you use a few of these toppings.

What’s the matter? Don’t you know what those are?

Okay, okay, I’m still learning how to use this camera…

I had some weird little peppers, some old Gorgonzola, some dried out thyme that was once fresh, one onion, a bit of tomato sauce and a bit more cheese… and they were perfect to unload onto a pizza. Pizzas are a great place to unload your kitchen scraps, they really are.

Sawsss. I like to say that word like I’m a real New Yorker in Brooklyn makin’ mya piza pya.

Smooth that stuff on.

Get really artistic if you want. Consider it your canvas, okay?

Next I pulled out some ricotta…

Put on the chopped peppers…

Some artichoke hearts… I’m tellin ya, really clean out your pantry, okay?

That one onion that I caramelized…

This is what happens when you try to take a picture and sprinkle Parmesan at the same time. It’s like tapping your head with your right hand and rubbing your belly with your left.

Way too much coordination for me. Luckily I was willing to sacrifice and eat the piece with too much cheese.

And then I added more cheese. Because it was the right thing to do.

Then some dried out oregano.

And there she was!

And there she was baked!

I had to stop myself from eating because I almost forgot to take a picture.

Can you taste it?

Now, if you want to add some finishing touches you can throw on a few red pepper flakes.

You can add some arugula or spinach greens to the top. Or to just one corner, so you can say it was a highly balanced meal.

It will never be as good as hers, but it was still nourishing to the soul. 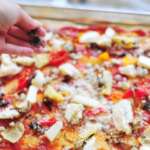