I just returned from L.A. L.A. land, and it was a lot of fun. It was a very successful trip and I saw all kinds of new things that you can only expect to see in a new place… for example, this culinary experience that I had while walking to my car one evening: 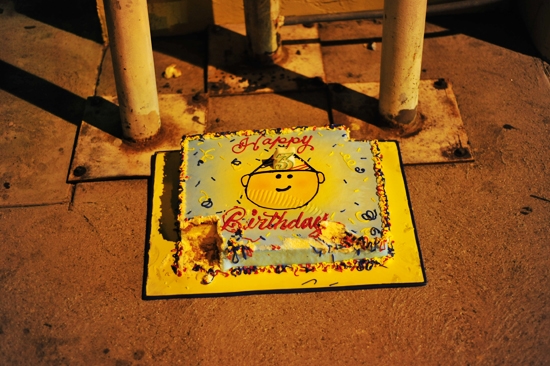 Somewhere right now, a 3 year old feels gypped because they didn’t get to eat nearly enough of their birthday cake.

And as I was sitting by the pool and the string bikini clad characters buzzed around me and I read The Picture of Dorian Gray I got to thinking about lard… (don’t ask me why, it’s just how my mind works, alright?)

There are several kinds.

There is leaf lard, for example, which is taken from the fat around the kidneys and inside the loin. It makes the most perfect flaky pie crusts, and for that it is considered the highest grade of lard.

Then there is is next highest grade called fatback, the hard fat between the back skin and muscle of the pig. You can use that for cooking, the way you would butter or olive oil. I cooked a steak in it the other night, because it was the right thing to do.

And then there is the soft caul fat surrounding the digestive organs, perfect as a wrapping for lean meats or in pâtés. I have an alarming weakness for pâtés… I’m seeking counseling for it.

This is some fatback my butcher friend gave me the other day. You want to buy your lard from a butcher who buys healthy pigs that live healthy lives, or if you’re feeling more adventurous, you want to save it from one of the pigs you hunt.

You cut it into manageable pieces place it in a saucepan, cover it with about an inch of water and let it simmer at the lowest setting. It’s the same exact method that I used for duck fat a few weeks ago, so I won’t take you through it step by step again.

The result is a very purty sight…

It is far better tasting than butter or olive oil and despite all the debate in years past, it is now widely considered much better for you.

I bet that cake up there used store bought lard… which I don’t recommend. That stuff is sketchy.

Just stick with your butcher. Or your rifle.

And you can freeze it for up to a year, which means you will have an endless supply of cooking fats, that you produced with your own two hands.

This is leaf lard here…see how snowy white? Like Pinkberry yogurt that is all over L.A….you just need a few raspberries on there…

Lard can really be harvested from any part of the pig as long as there is a high concentration of fatty tissue there. And as you know, you always save the brown cracklins that are left over after you render. With those we will make cracklin bread soon…

It is your destiny.

Friends - I Need Your Help With Our New Public Television Show!