It’s entirely possible I’ve lost my mind. But I prefer to call it investigative blogging. It has a better ring to it.

And so she set about telling me that she used to use egg shells as dessert molds to make egg shaped desserts. “You can use cake batter or jello,” she said simply.

“And you shake the egg to break up the yolk so it blows out easily.”

And an even smaller hole on the top.

You blow in the small end and out comes the insides of the egg into a bowl, destined for an omelet.

Then you give them a power wash on the inside and shake them out.

And let them sit in their crate.

Meanwhile, you boil some water, and put your jello in its various bowls.

And you mix in the boiling water and let it dissolve. Use slightly less water than the recipe calls for to get a firm jello.

Meanwhile, it’s time to get out the hot wax.

Drip a little bit onto the small hole to seal it.

You really have to channel Martha Stewart here in order to keep it real.

But then I started channeling myself again… because my pastry bags are in New York… and that’s when I got off track for a few minutes.

I tried to go all MacGyver on the eggs and use a zip lock bag as a pastry bag and it wasn’t so smooth.

Kodak glasses! Perfect for developing film in a darkroom or filling egg shells with jello!

A funnel would work too. If I had a funnel. If only I did.

All natural, from peach juice, hand squeezed by a monk in Tibet.

Lime. Plucked from the underbelly of Orlando.

Raspberry. Hand selected from a patch in Yorkshire.

Lemon. From the jello-aisle in Safeway.

Grandma P. used to place these in a bed of whipped cream.

You could also put a dollop of cream in the bottom of your egg cups.

You can also call me Martha from now on. Thank you.

Now excuse me, I have four bowls of leftover jello to eat. 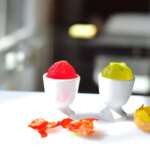