After our Arctic morning on the river, contending with Mother Nature’s bad, bad mood, we had lunch on the shore.

The first thing you’ll need is a sharp knife. Which I didn’t have.

The second thing you’ll need is a flat surface on which to fillet your fish. Which I didn’t really have. I had a cutting board, but what you can’t tell is that I was sitting on a slope on the rocks. It kept things interesting…

What we did have though were some pliers. Which helped get out some of the pin bones.

Or… if you’re feeling modern, a grill would work too. But I suggest you go Native, and get out some coals and a skillet and cook the fish over radiant heat. That’s the road to a perfect piece of fish.

Somehow, after a game of twister, I managed to end up with some lovely fillets.

Then a man named George came over.

I liked his outfit. Especially the medley of feathers attached to his lapel.

He was on the rocks fishing with his lab and had lots of stories to tell. They were a nice distraction as I negotiated with the fish fillet.

At last, the fish was portioned. Can you see the difference between the boy and girl? The boy has the lighter flesh because he was in the fresh water for longer.

Low heat is your friend when it comes to cooking fish. High heat is your enemy. Especially with oily fish because the oil will break when the heat is high, and that’s when it becomes smelly and bitter.

Here’s something else to know. I have to credit Jon Rowley for this lesson. You’ll read all about him in my book this fall, but to put it simply, he changed the way America eats seafood.

See how the fillet is curled on the grill? This fish is actually too fresh. According to his “Rigor Mortis Theory,” the best tasting fish is one that has gone through rigor mortis and comes out of it before it is eaten. When it curls like that, it is actually going through rigor mortis in the pan, which causes the skin and flesh to contract, which tears the cell walls, and often causes that “white goo” that you see coming out of cooked fish. That’s albumen. A sign that the fish is too fresh, or hasn’t been handled properly on its way to the plate.

Nevertheless, we pushed forward with the shore lunch, because too fresh fish, is always better than cheetos for lunch.

Plus I took the leftovers home and ate them a few days later, when they were even better.

If you want to hear more about “Shore Lunch,” I’m going to be on the radio again tomorrow chatting with Joel Shangle of the #1 outdoor radio show, Northwest Wild County. All the tune-in details are here: SPORTSRADIO 950 KJR. I’ll be on at 7:30am PST, so if you’re not on the West Coast, you can always tune in via the pod cast. 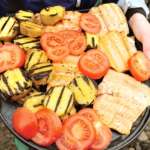