I got up at 5:30am for the third part of that rockin Sonoma weekend I had. It was hosted by Alan Campbell, a photographer, hunter, cook, farmer, abalone diver, wine maker… the list goes on. Suffice it to say, I want to be like him.

The plan was to go turkey hunting on his friend Charlie’s ranch in west Sonoma. And as I drove out of my hotel in the darkness, eight male turkeys were hanging out at the entrance to the hotel, fanning their feathers… mocking me perhaps. They really are smart. They always know where to be.

The ranch has been in the same family for 150 years. Charlie was a real cowboy, ie. he was sorry he couldn’t join us but he had to go ride horses. He left his two nephews with us though to go scout for turkeys in another part of the ranch.

This is a ranch in Sonoma: Pinot grapes and green rolling hills.

This is some of the best pinot soil around. That’s what they tell me at least, I’m not a pinot soil expert.

Alan started making hen noises with various contraptions. We didn’t hear much for quite a while. Turkeys are like ghosts. One minute you hear them, the next it’s like they were never there. And recent information is important… which is why the boys were scouting.

But then far off on a hill behind us…

…we heard a Jake start responding to our calls. (Let it be known that my southern hunting friends are laughing at me right now because the proper term is not “responding,” it’s “gobbling his ass off.”)

We went up the hill and through the woods to find him.

If you haven’t turkey hunted before, basically what happens is that male turkeys are particularly eager to mate at this time of year, and will come find the women turkeys. Which is why you make female turkey noises… to attract them.

The hill was beautiful. And that was the nice thing about turkey hunting in a vineyard. The beauty alone makes it worthwhile, not the amount of game you take.

I couldn’t say how much time had passed, which is usually the case when hunting. That’s the beauty of it, there’s a total stillness as you stand in the field or the woods or the vineyard and wait with heightened senses.

Alan called a few more times and we waited on some boulders. He responded…er… gobbled his ass off a few more times, but he had moved, further beyond the hill. And we think he already had quite a few ladies with him. One lone hen wasn’t going to be enough to make him leave the pack. He was a regular pimp right then, and there was no competing with that.

So it wasn’t an eventful morning… but it was a beautiful, quiet, still one. And those are magical.

We hopped on the ATV’s and drove through the ranch to see the sights.

This is where the grandfather of the ranch lives. The house has been there for centuries, and the other family members have built their houses around him.

This was his horse.

And we drove up hills like this. And I decided that I much prefer hiking in an ATV than by foot when the hills are this steep. I’m just sayin.

This made me feel like a G I Joe.

This made me feel like a sophisticated G I Joe.

This made me feel like the Texas Chainsaw Massacre on a picnic.

We drove the ATV’s back up to the vineyards for “lunch”… at 9 am.

Past heavy farm equipment, which has a special place in my heart. It reminds me of my days in France.

Alan popped open a bottle of the wine he makes…

Gave it a sniff…

And THESE. The man makes his own olives. He labored over these for 18 months, switching their brine water every other day.

I think he reached a new level of dedication. They were utterly incredible. I am going to stalk him until I get the recipe.

And then this homemade bacon. Anyone who feeds me bacon gets an A+.

And then he fed me this:

As well as a hard boiled egg from his chickens.

This was a fantastic turkey hunt. Even without a turkey in the bag.

Giveaway Winner! Oh man I loved all of your answers, they made me smile and tear. The randomly selected winner is:

#2 Tara – “I am a down home kinda girl. Love the dirt between my toes and good southern food on my plate.”

Email: georgia@georgiapellegrini.com to claim your prize!

Now, one of the things I didn’t mention is that Alan is not only a photographer, but the photographer for the “Down Home Downtown Cookbook” by Chef’s Jeff and Josh. And so, in honor of their exquisite cookbook, I’m going to give a copy away to a randomly selected winner. All you have to do to enter is answer this question in the comments section below:

“Are you a down home or downtown kind of guy or gal and why?”

Winners will be selected on Wednesday at 9am PST! Good luck! 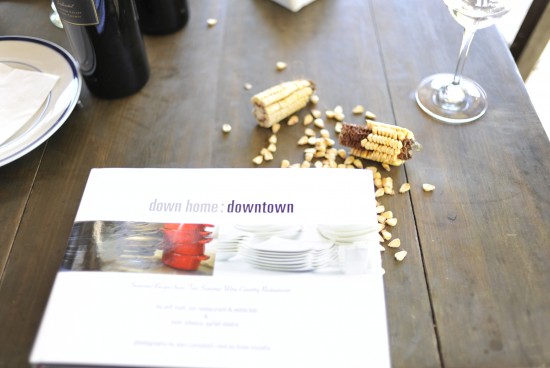