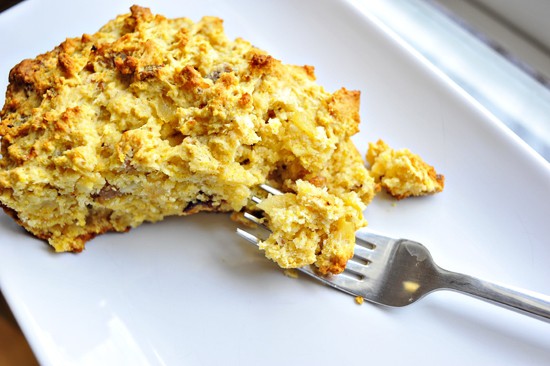 A few weeks ago I rendered some duck fat.

And then I rendered some pig fat.

And it was good.

Whenever you render fat, you’re left over with something we call “cracklin’.” It’s an automatically southern word. Don’t bother putting a proper -ing on the end of it, you’re wasting your time. It’s cracklin’.

The first time I heard about cracklin’ was from a farmer named Frank Griffith in East Tennessee. I was standing inside a smoked ham shop with a bunch of farmers, who were grazing in the entrance, swapping stories and waiting for sides of bacon. They told me their stories in their slow molasses voices, barely audible above the drone of the meat slicer. And they told me about their favorite foods–and all the ways to make the best gravy, and the best cornbread, and what was it like to eat a lobster anyway?

We talked for quite a few hours and they told me about cracklin’ bread–bread studded with pieces of rendered fat.

You’ll read about those farmers and the hog smoker who has a special place in my heart in a few months when my book comes out. But in the meantime, while we wait for the printing machines to spit it out, we can eat cracklin’ bread. It’s a good way to pass the time. It really is.

These are some of the things you will need. Including the fat that you rendered. I also threw in some honey from the bees at Tulipwood and an onion.

My skillet, my love.

You want to get them soft and slightly brown.

Low and slow will keep them sweet and a caramel color.

Once you’ve removed them from the skillet, place your skillet in the oven to get it hot. A preheated skillet is the road to rockin’ cracklin’ bread.

Combine your cracklin’ with your onions.

In a separate bowl, pour the buttermilk.

Then try to figure out how to crack an egg and take a photo at the same time.

I did it. Can I get a high five? Egg and buttermilk.

Give it a whisk.

Next comes the dry ingredients.

Then introduce the wet to the dry.

Combine it all well.

Add it to your HOT skillet. And I’m not just talking about her looks.

And there you have a warm crusty top. And soft inside. Just the way I like my… er… craklin’ bread. Any bread really. 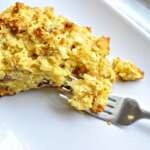