…also known as “How to dig a clam like a gentleman (or lady).” Alan had discovered that instead of getting yourself covered in mud, a little PCB pipe, and a double sided shovel kept one nice and mud-free. So we were the clean ones on the island.

Alan drove his three person boat back and forth until we were all there. 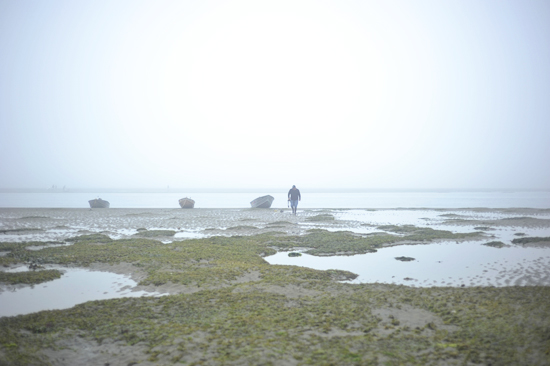 Then one of the girls tried her hand at digging out a horse neck clam. 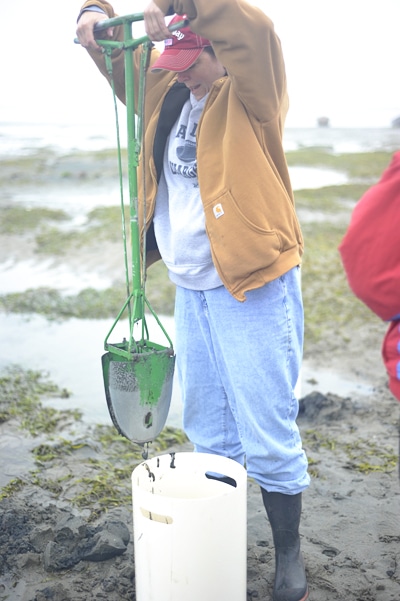 See how far up she has to lift her arms? This is when it pays to be tall. This is why I struggle at the beginning stages of clam digging. 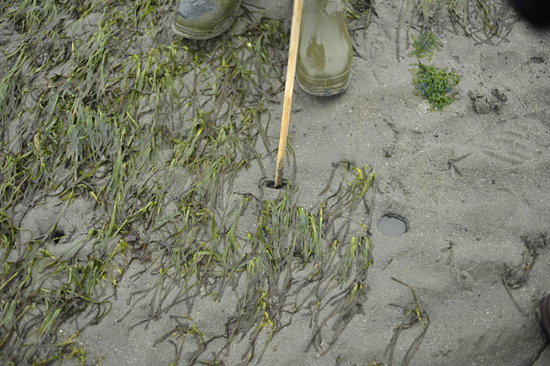 Other people poked at the holes with their dowels while she shoveled. We marked the spots where we thought the largest clams would be. Do you remember how you tell which hole has a large clam underneath? Do you? (See yesterday’s post if you don’t!) 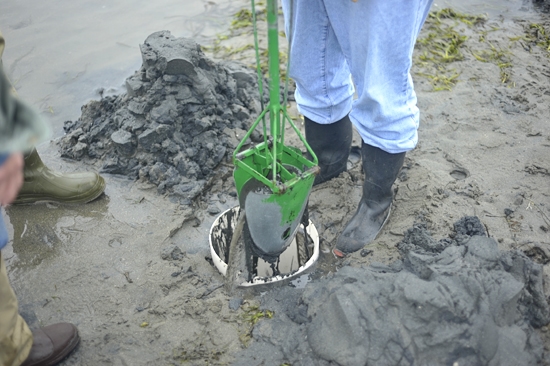 When you get to this stage, where the PCB pipe is well into the gooey black mud, it gets a little desperate if you don’t find a clam. It begins to feel as though you’re digging to the end of the earth. It begins to feel that you may never, ever stop digging. 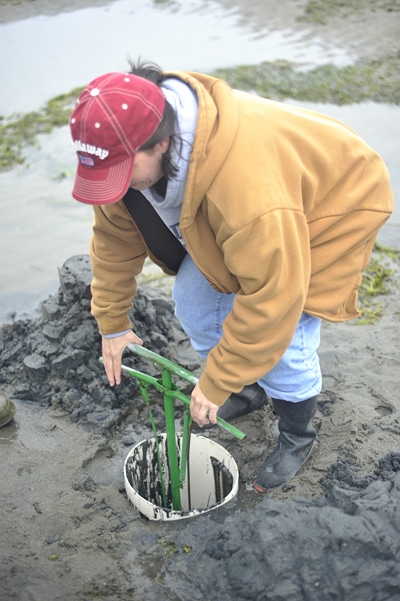 Like I said, it’s a “lovely” ab workout. Eat a cheeseburger for breakfast. ALSO, and this is very important… 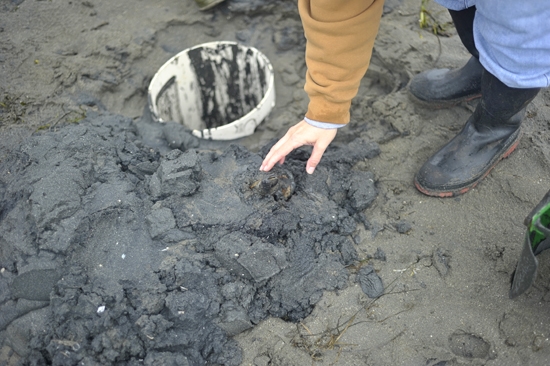 …keep an eye on your mud as you get low. Sometimes you’ve pulled the clam out and you didn’t even know it and just as you’re cursing the world someone happens to kick the mud and says “hey! here’s a clam!” and you realize you could have stopped ten scoops ago. 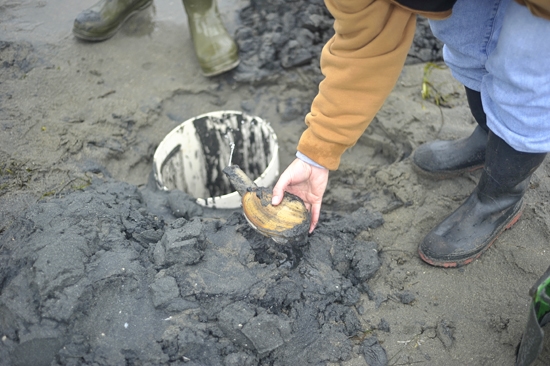 This is a bigun’. 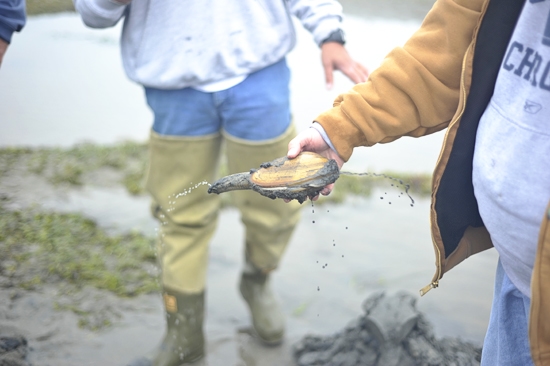 And they squirt! They are bivalves and they suck water in one tube and out the other and when you pull them out they squirt it all out at you. 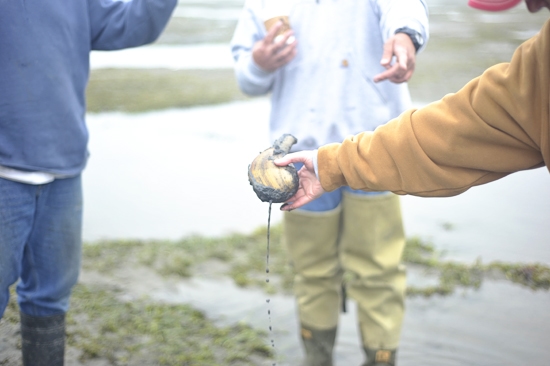 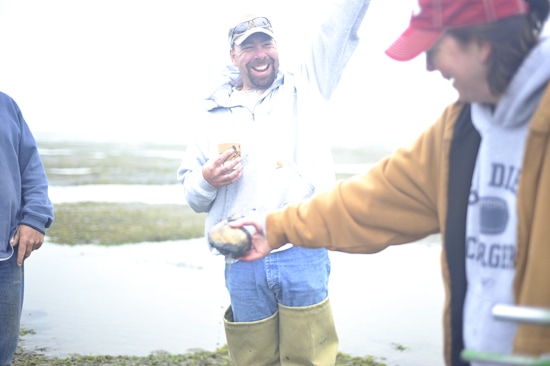 It’s a thrilling accomplishment to finally get to the clam. You have to be there. You feel as if you deserve a Pulitzer. Or at least a chorus of angels singing Gloria. 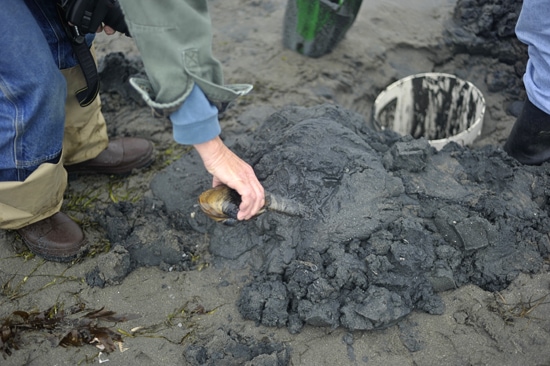 Sometimes when you get more than one clam per hole, you feel you deserve both. And you do. 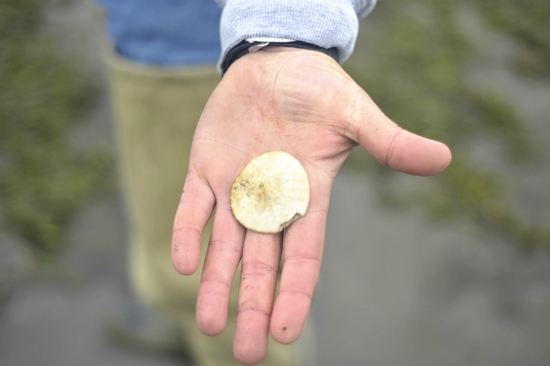 This is a sand dollar, not a clam. There were lots and they were beautiful. We hunted for them if it wasn’t our turn with the shovel. 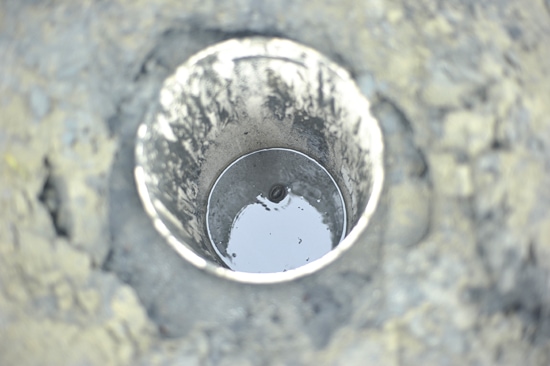 Want to see a horse neck clam float to the surface? I thought so. See it’s little head peering above the water’s surface? 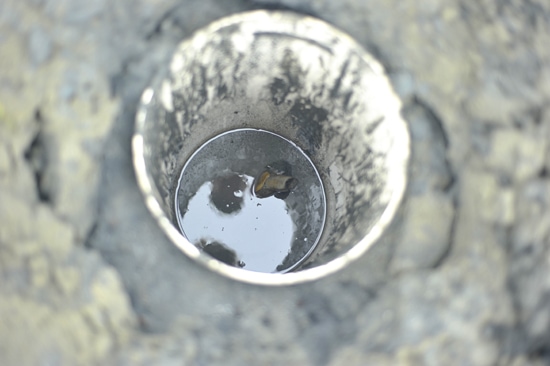 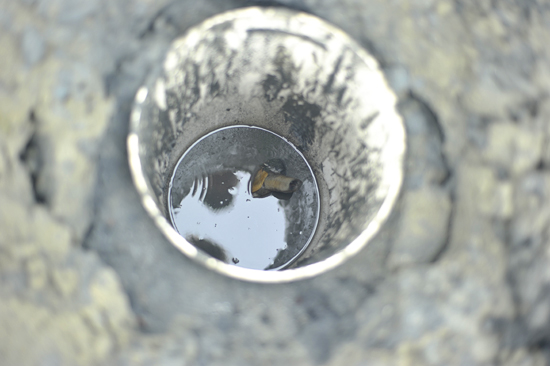 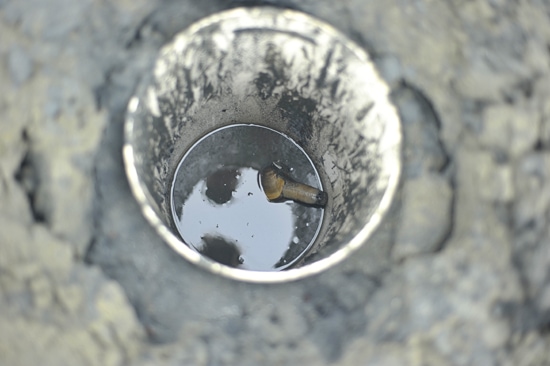 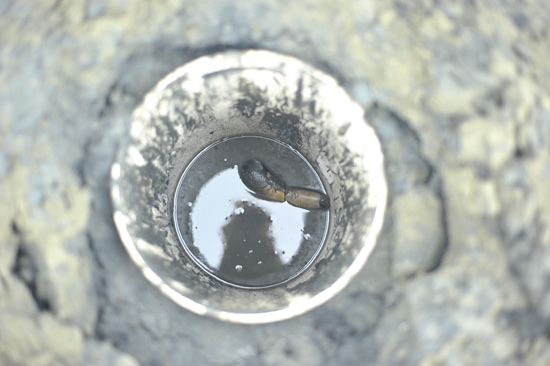 Wasn’t that thrilling? They just roll over and float. 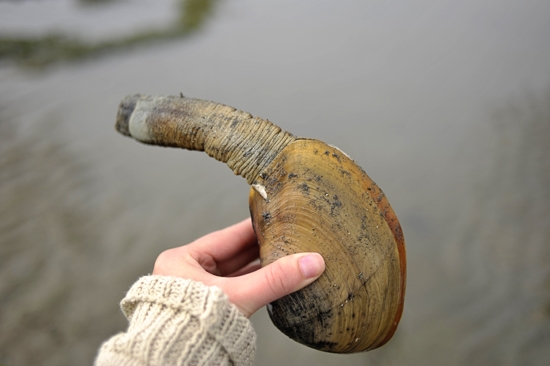 This is my clam.

His name is Fred. 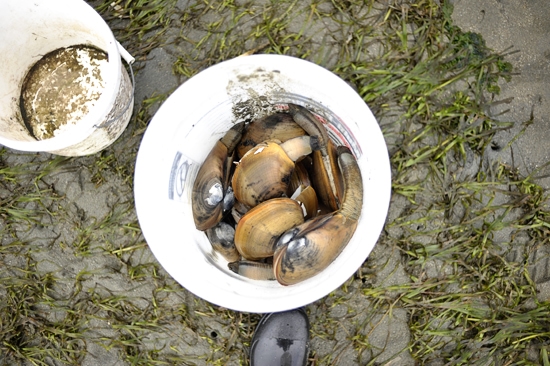 We left with about 30 clams in all, less than our licenses allowed us, but the tide was starting to come up and when it does, it moves very fast. 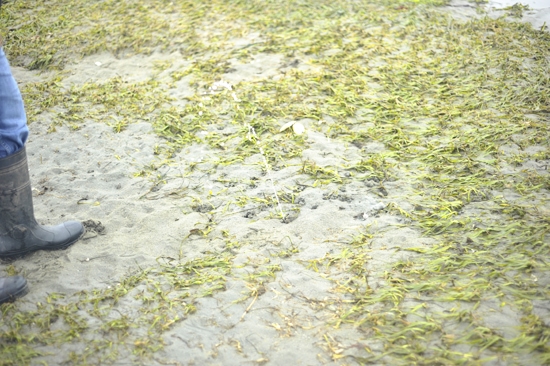 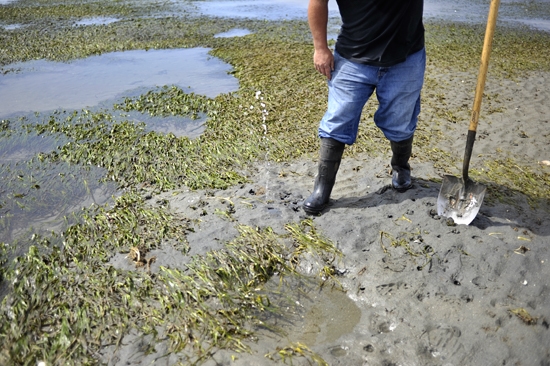 That’s their way of telling you to go away. 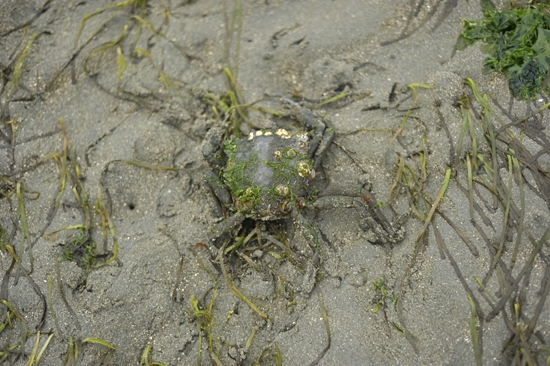 Speaking of other things we saw on the temporary island, here’s a very wise looking crab. 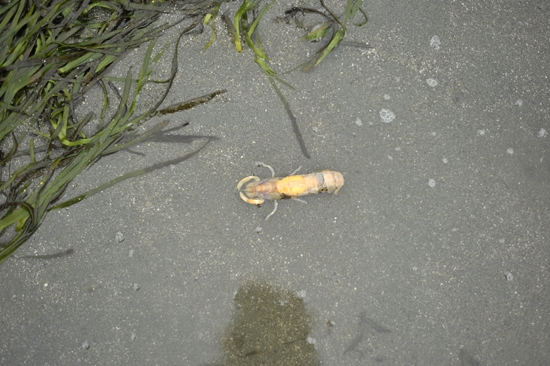 And a pregnant shrimp. How do I know she’s pregnant? 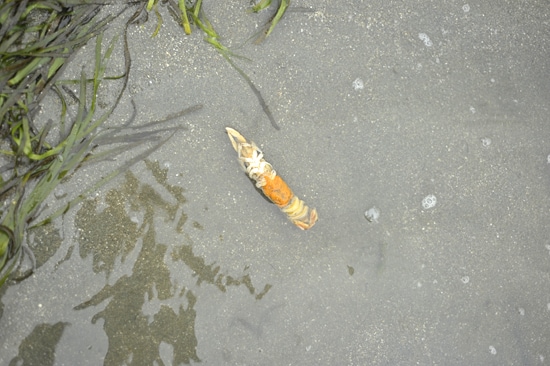 Here, I rolled her over for you. She didn’t mind. Look at the eggs! 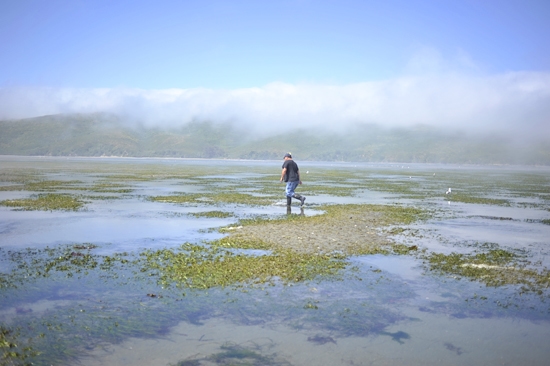 See how the water on the island is starting to blend in with the water in the bay? Yeah… we were about to lose our boat. The tide she was a comin’. 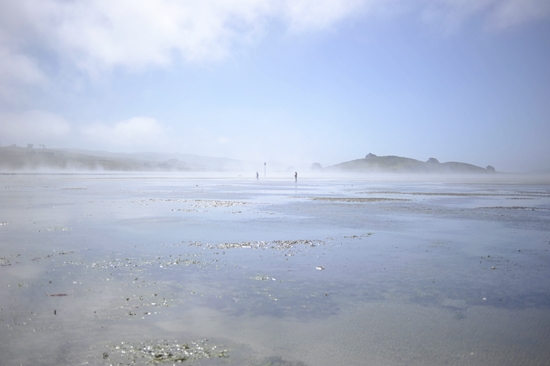 All of the mud covered humans scrambled. Us civilized clammers with our PCB pipe and double-sided shovels, well… we cut it close. 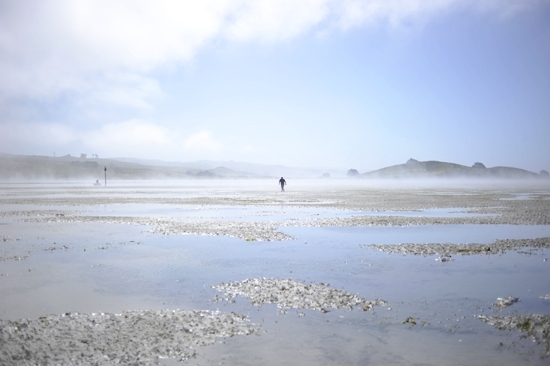 Alan went to get the boat. I followed. I wasn’t interested in swimming. 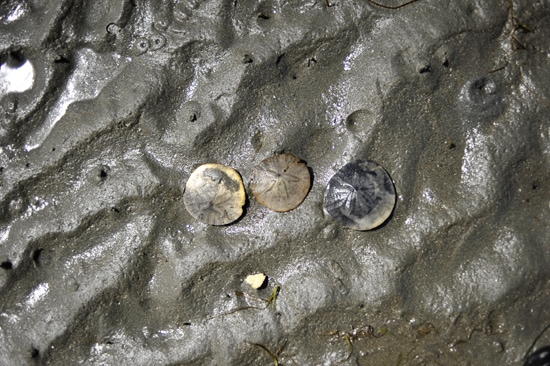 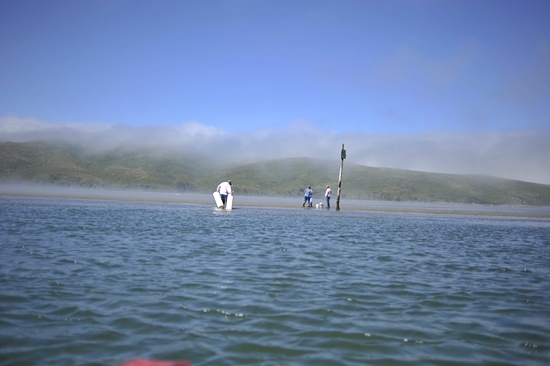 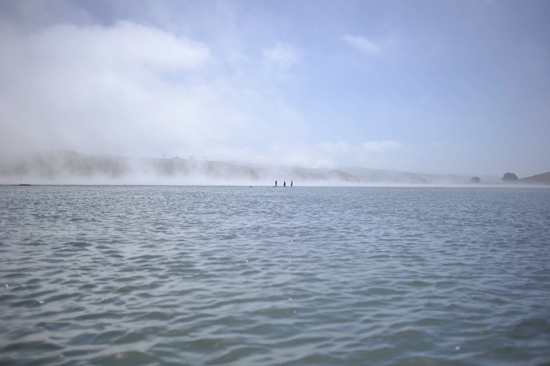 Will the last clammers make it off the island? Will the boat get back in time to save them? Stay tuned to find out tomorrow…