Remember yesterday how I showed you a glimpse of a strange figure in a hazmat suit wandering through the woods?

That was my dad.

He only comes out of his hiding place to feed the bees. My interactions with him are solely when he’s wearing netted head gear.

But we do both have hermit tendencies. But we overcome them when society demands it of us.

He enjoys interacting with his bees. He fires up his wood smoker and wanders out to the woods and talks to them.

He also cooks for them. He makes them this: 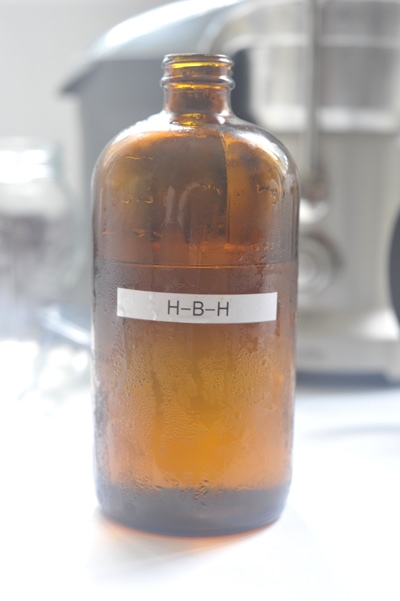 H-B-H stands for “Honey Bee Healthy.” He makes his own, but you can buy it too. It includes sugar, water, lecithin granules, spearmint water, and lemongrass oil.

He feeds this to them once the honey flow has stopped.

The honey flow stops when the flowers stop blooming, sometime in the middle of the summer. In the fall you start to get more blooms and that’s called the “second flow.”

Last year he lost two hives to starvation, so this year he wanted to get a jump start and make sure they have plenty of store for the winter so they don’t starve. 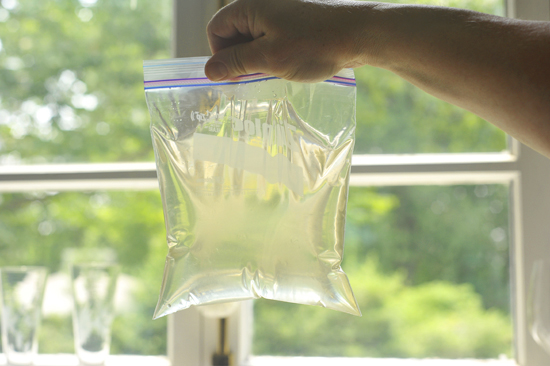 He takes a quart bag and adds the liquid after he squeezes most of the air out. 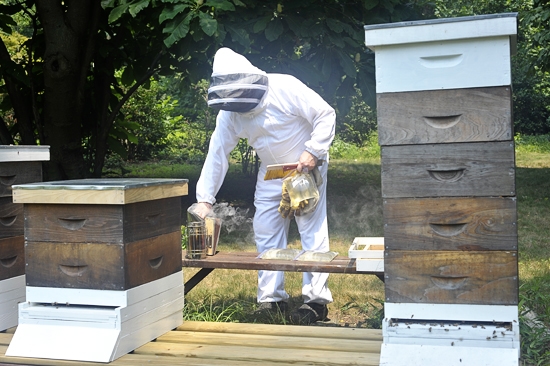 Then he dons his bee suit. 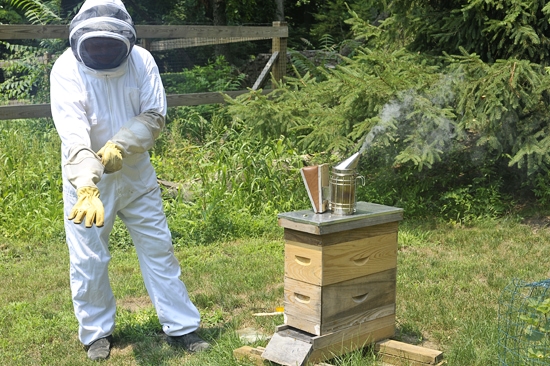 He has small cell bees, Russians, that come from Don “the Fat Beeman” Kuchenmeister, in Lula, Georgia.

They appear to be more gentle than the Italian bees he used to have. And they’re small cell bees. The small cell bee theory is totally and utterly fascinating, and something I spent a lot of time researching for my upcoming book. I went to Norway and followed a bee keeper around who believes he knows how to “save the bees.”

You see, the bees have been disappearing in recent years in an epidemic called “Colony Collapse Disorder,” and there are many theories as to why. My Norwegian bee friend has the answer, which has made him unpopular among the scientists.

We’ll talk more about him soon, he’s utterly fabulous. A fabulous bee keeper. He sleeps in the woods with his sleeping bag in the summer, among the bees. He used to have a day job, but he likes this much better. 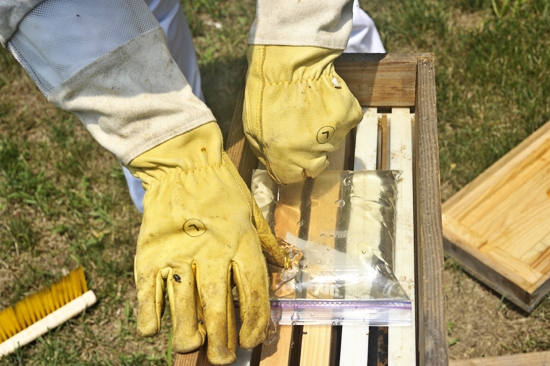 This is the top of the baby hive, called a “nuc.” A small hive helps the new bees get started when you take frames from another hive and let some of them start over.

He lays the plastic bag over the top,  lays it over the frames, cuts four small slits in it, and they come up, gather it and take it down to store it. 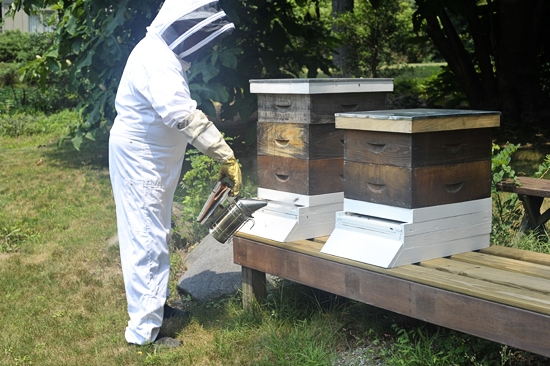 The smoke makes them drowsy so that you can mess with their hives for a few minutes. When they smell smoke they cluster together down below to protect the queen. 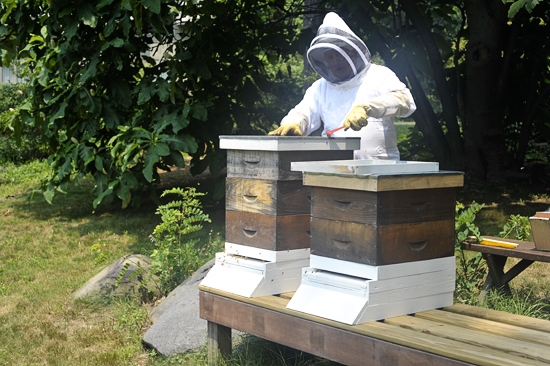 These boxes are made out of cypress wood because, my dad says, “I’m a nut.”

He sands them and oils them and they last forever. “I have happy boxes,” he says.

Next year he wants to try to do “comb honey,” where you put boxes in called “shallows.” They are special frames where you can cut a square chunk of honey comb out and have it with the honey. So people can “harvest” their own, so to speak. 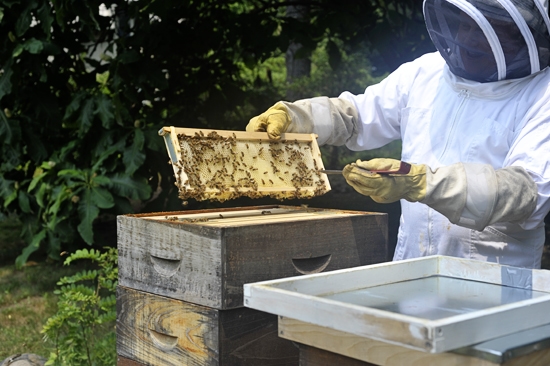 He pulled out some of the frames to check on them, since two of the hives are brand new this year. 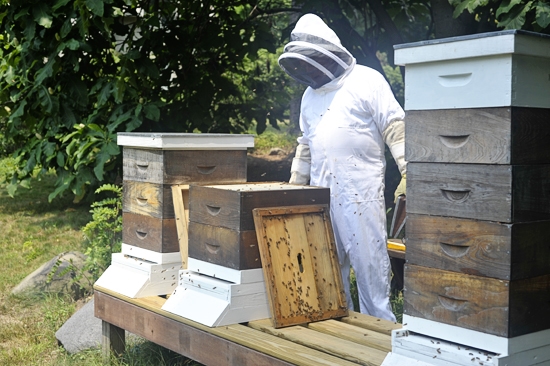 One isn’t doing as well as the other. The queen isn’t as strong. If she doesn’t lay eggs in a dense pattern, or if she lays eggs more haphazardly, then you don’t get as many bees. And the more bees, the more honey. 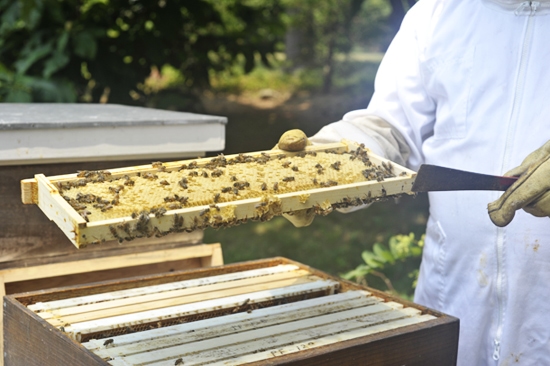 Some of the frames have capped brood, which means they have new bees in there percolating. You put a separator in the hive so the queen, who is bigger, can’t fit through to go up high. That way you know you’ll harvest your honey from the top frames, and leave the bottom frames for her to lay eggs in. 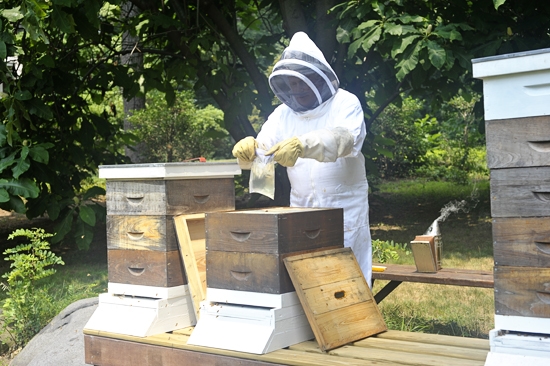 Both of these new hives get “HBH.” 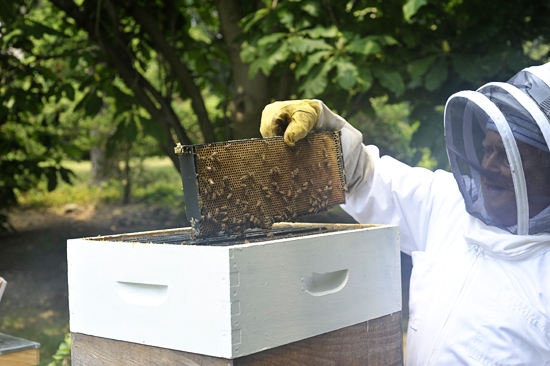 But these guys are doing awfully well. They don’t get any extra help. If they do too well, there will be so much honey that they will swarm and start a new hive on a tree somewhere, away from this hive. And that isn’t good. So you have to keep an eye on them and keep adding layers for them to grow into.

Here is the recipe for Honey Bee Healthy that my dad uses. You can make gallons for the price of a bottle of HBH! 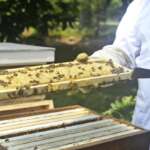