This morning I went to visit my great-aunt’s freshman year roommate. But more than that, her lifelong best friend. Her name is Mary Ellen. My great-aunt Gray was a very special and unique character, and if you’ve read the first few sentences of Food Heroes you’ll see what I mean.

Mary Ellen and Aunt Gray spent their entire lives diligently corresponding via snail mail and would pay each other visits a few times a year from college until Aunt Gray died. It was a very special and unique friendship. Mary Ellen often tells me, “I miss Ann.” 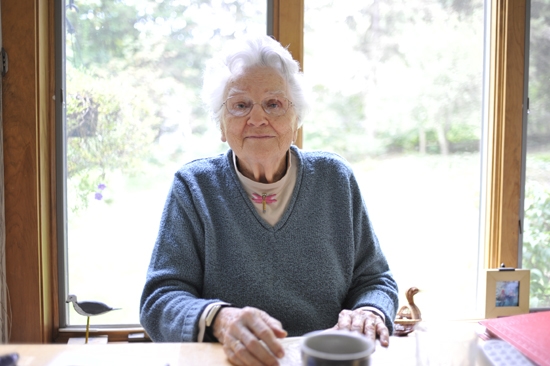 The other things I love about spending time with Mary Ellen are the stories she tells me from their Wellesley days. I sat at her kitchen table this morning and she told me some more over a cup of Early Gray and I started to cry. I think I’ve been crying on and off since then. In a good way…

“I remember the first time I met Ann. They didn’t tell us who our freshman roommates were going to be ahead of time back then, so I remember nervously walking down the steps of the co-op to meet her. The co-op was where students worked and lived together, those that needed to help pay for college. At the bottom of the stairs were two small people, Ann and her father, with his big white hair and clear blue eyes. He saw that I was tall and when I got to the bottom he said in his big Texas accent, ‘Now you will take care of my little Ann, won’t you?’And ever since then I felt this responsibility to look out for her.”

That’s when the second batch of tears rolled in. The first was simply when I saw her. There’s something about those ironclad friendships that move me deeply. And Mary Ellen is as straight an arrow as they come. So was my Aunt Gray.

Then she told me about what it was like to visit them here at Tulipwood and how amazing it was that she lived in the same small bedroom her whole life. And kept all of her Wellesley items pristine until the very end. They didn’t have electricity in their house at Tulipwood until 1948, and she said it was like going back in time. And she marveled at the differences between my Aunt Gray and my Grandma P. (who were sisters) and how even though both were Wellesley girls, they had such different ways of plowing through life.

The pin Mary Ellen is wearing in this photo is the same pin my Aunt used to wear… I don’t know if she got it from her but I have a feeling she may have. Grandma P. has one too. Some have you have commented on it before. 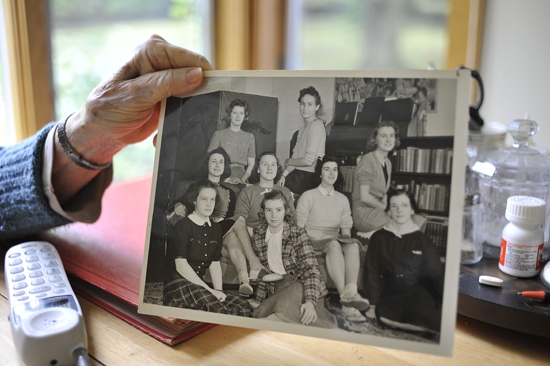 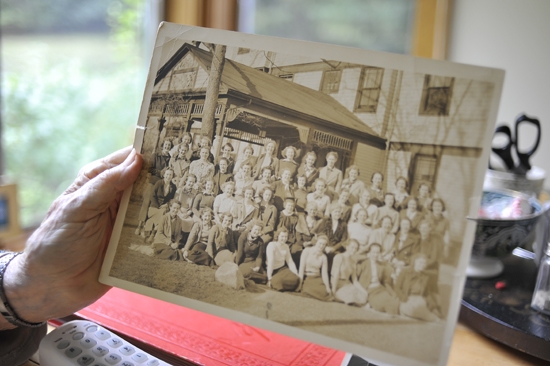 She showed me pictures form their times together. And then gave me this one to keep… 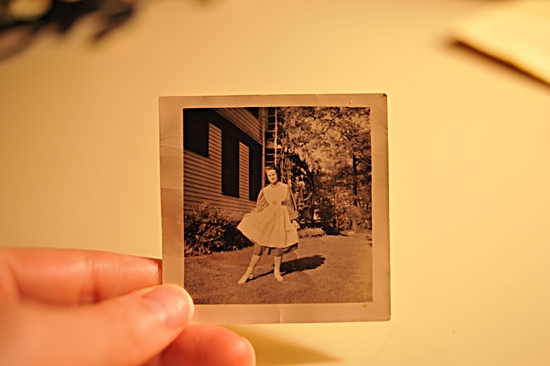 …it’s from when they were in a dance club together at Wellesley, Aunt Gray is in her dancing outfit.

That’s when I cried again. 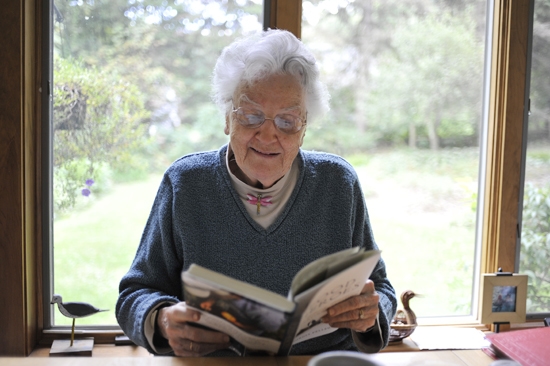 And then she leafed through my book and saw the parts about Aunt Gray and smiled.

That’s when I cried again.

And as I left, and wished I would never leave, the coo coo clock made a sound. And she said, “Ann gave that to me.”

And you can guess what I did.

And then she gave me a big hug goodbye and said, “You can consider me your second great-aunt.” 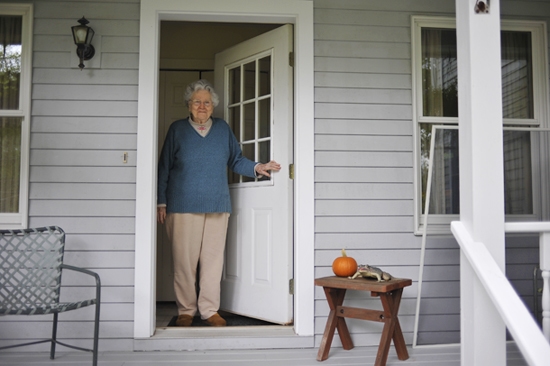 And then I really lost it. And ran to the car. And tried to pull myself together because I had to speak on Wellesley’s campus 15 minutes later. I really could have spent a few more days there, I regret that I couldn’t ask her more questions. I adore Mary Ellen. Just like my aunt Gray did. 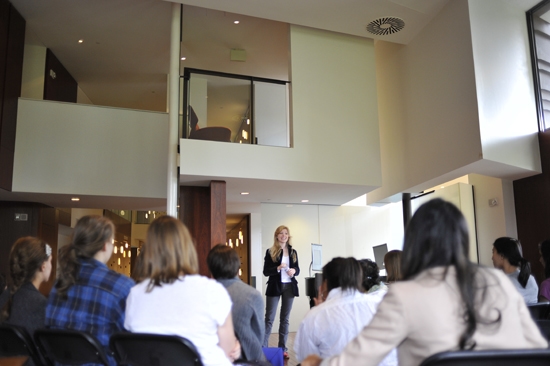 And then, puffy eyed, I stood in front of a lot of Wellesley girls and told them about life. The way I see it. And I told them to please excuse the mascara running down my nose. 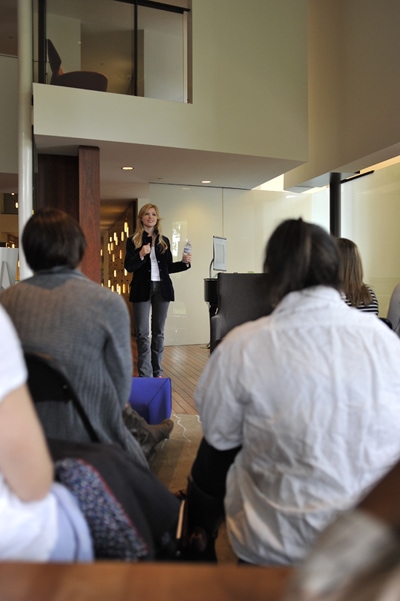 And they were lovely, and such a fun audience. 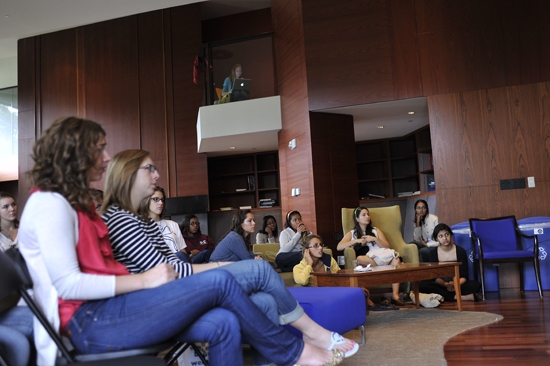 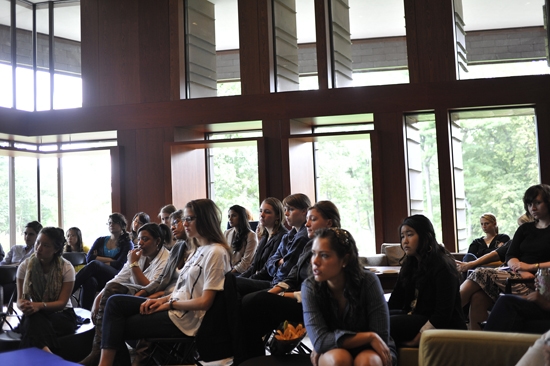 It wasn’t long ago that I was sitting right where they are now. It’s surreal actually. 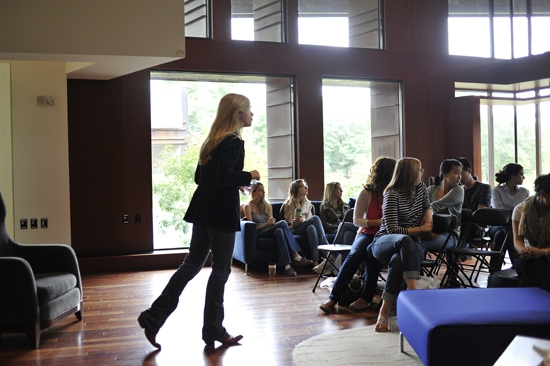 The night before I roamed the “Ville” as we called the little town, and had an ice cream at my favorite creamery and marveled at the new campus center with it’s slick look and dimly red lit bar. But that dimly red lit bar and this swanky campus center is all that’s really changed. Everything else is as it was.

Except for me I suppose. Which is why I guess I was here… 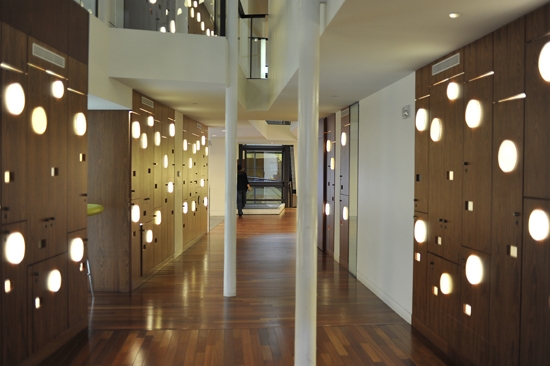 We talked for quite a while and it was a joy getting to know them and answering their questions on life and the pursuit of happiness.

As if I have all of the answers…

But at least I threw out some theories… 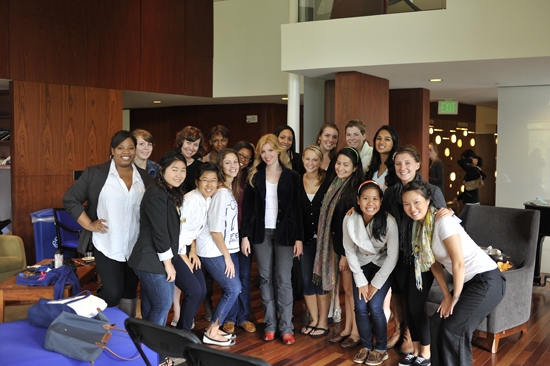 And this is the lovely Phi Sigma Lecture Society of which I was a member long ago… they organized the event.

And these are some pictures of my stunning campus. It’s breathtaking really… it seems to get prettier every time I visit. 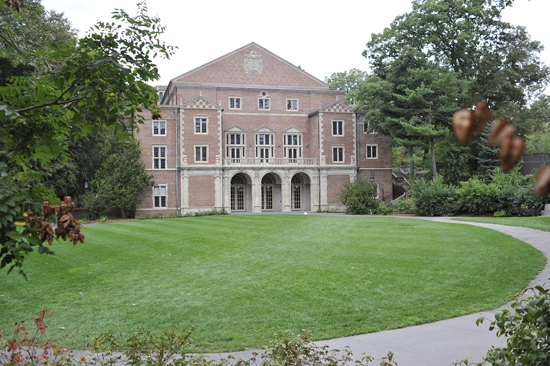 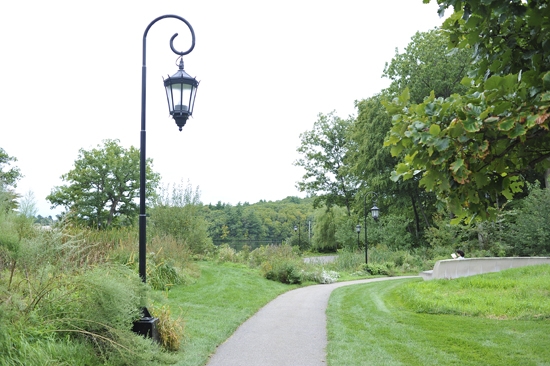 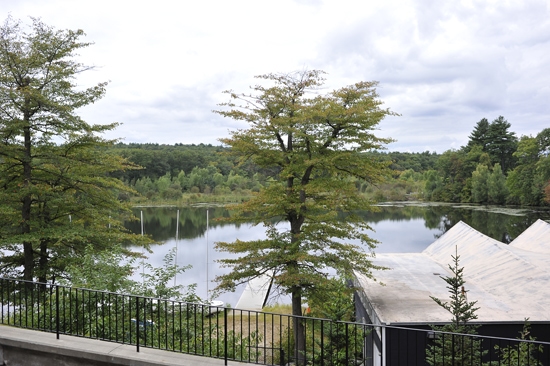 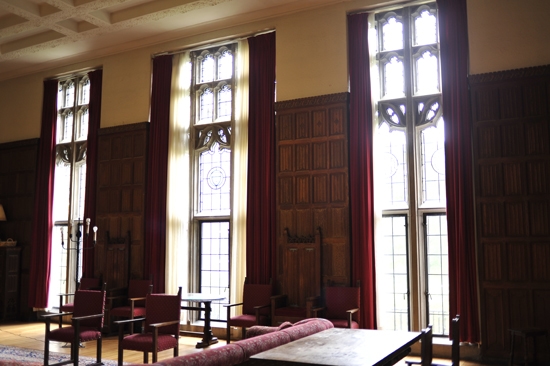 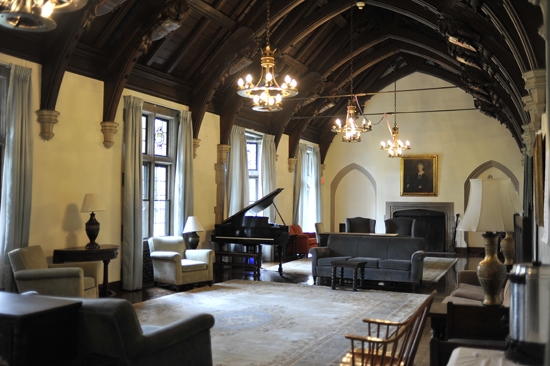 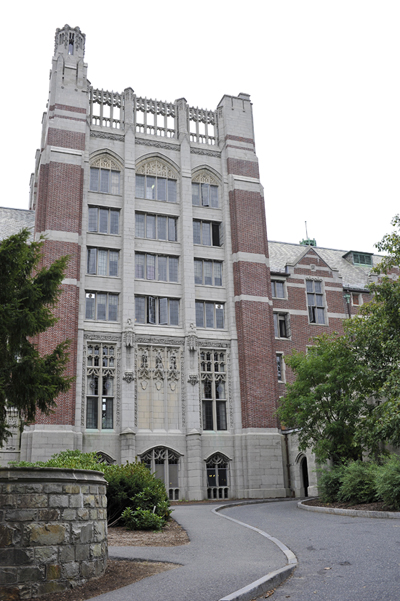 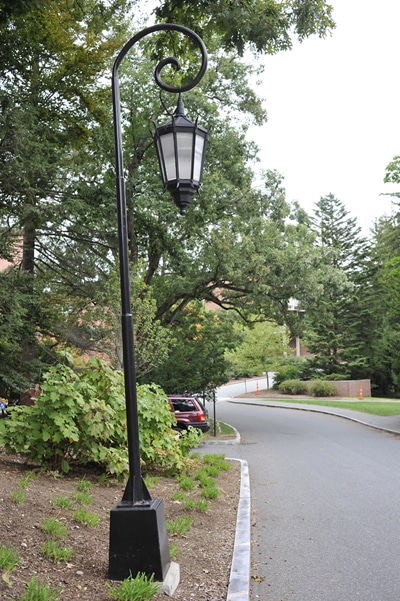 But my pictures really don’t do it justice. I just couldn’t bring myself to lift the camera, I wanted to take it in with my own eyes. For really good pictures, you can go here. 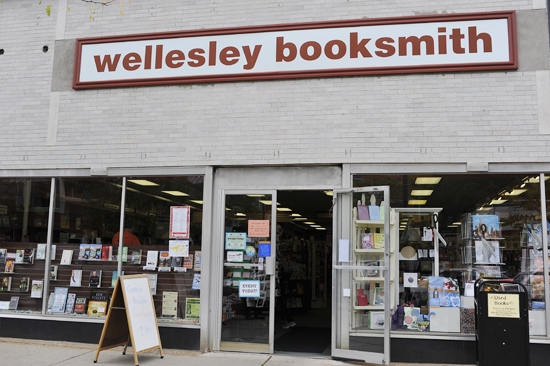 And then it was on to the Wellesley Booksmith. It was a great reception and one of my former Wellesley professors was in attendance. 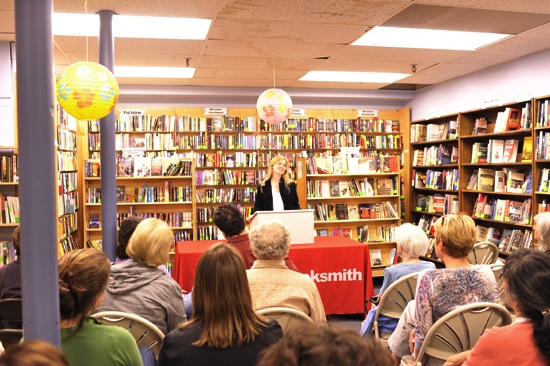 That made me a tad nervous. I reminded myself that this one wasn’t for a grade! And he was so nice as always. And didn’t mention it if I mispronounced any of the German words in my beer chapter… he was my German professor after all. 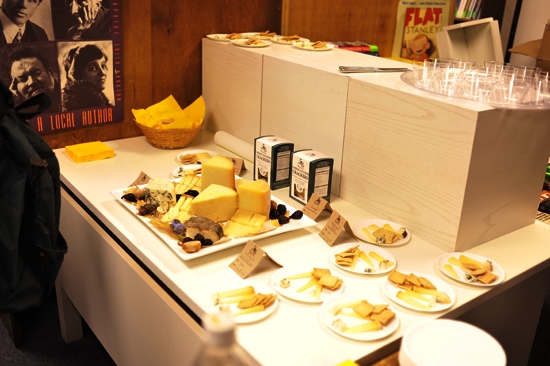 Wasik cheese shop in “the Vill” sponsored the cheeses and they even went out of their way to order the cheese from 3-Corner Field farm, since they’re in my book. That’s love. 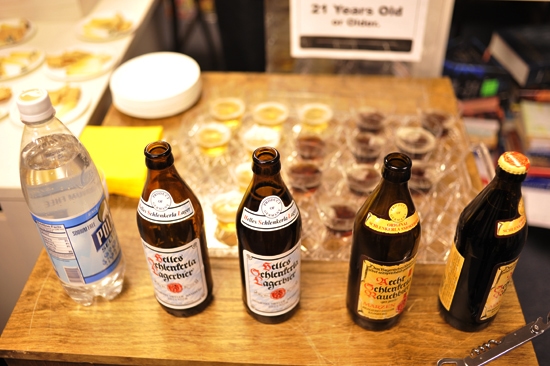 And it went very well with the smoked beer from Schlenkerla.

And this is Laura. The president of the Wellesley Phi Sigma Society who was my “handler” for all of this visit. I don’t know if I would have been able to tie my shoe without her. 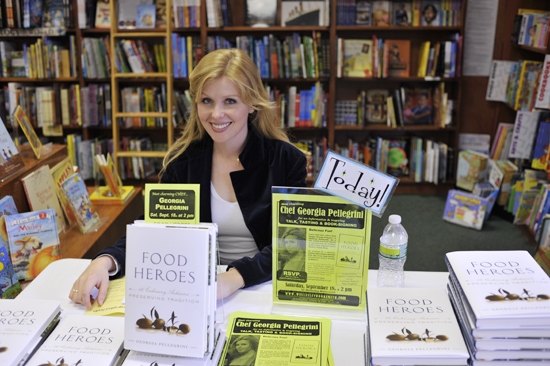 But all of the people in Wellesley had this particular warmth about them… like they genuinely wanted nothing but the best for this author swinging through town, and they really came out to say so. 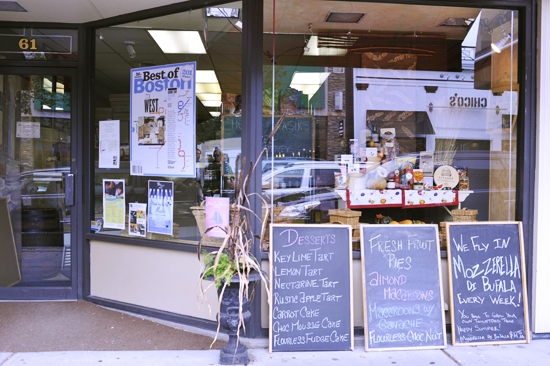 And before I said farewell, I paid a visit to Wasik’s cheese shop, where I used to visit often as a college student. 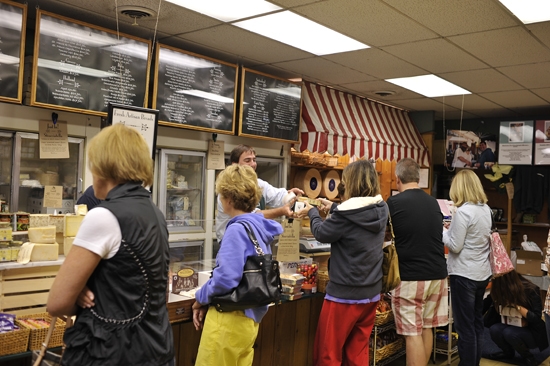 I ended up with a lot of cheese for the road. It’s pretty exciting.

And then I got back into the car and drove down to Tulipwood through the beautiful foliage of New England, with the trees just beginning to show their burnt edges.

Thanks Wellesley, it was good to be back.

p.s. Also, thank you to Slow Food Boston, for hosting me the night before, in a very rad gallery space… 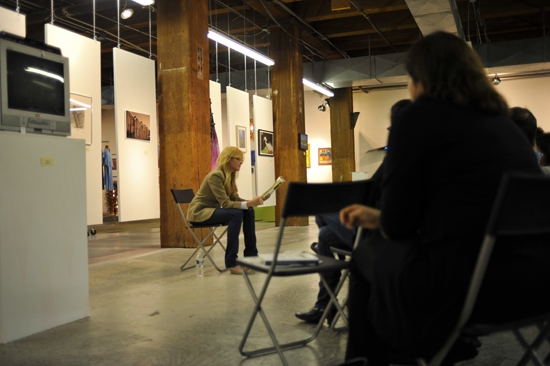