We had a bee swarm around here at Tulipwood earlier this week. It all happened very quickly — we were planting vegetables in the garden, toiling and sweating away because somehow we decided it would be a good idea to plant 25 varieties this year.

Think it was a cold long winter?

We are embracing the sun and got a bit overzealous… luckily, my brother has friends and enlisted them to help plant and rake and shovel with the promises of hot peppers in a few months. They got giddy over the watermelons most though.

As it was all happening, a big cloud formed in the sky, a noisy cloud and it turned out it was the bees.

Bee swarms are what a beekeeper works against. They are a loss when they happen, a loss of time, a loss of bees, a loss of honey, a loss of money.

Sometimes, when you’re lucky enough, they can be remedied. 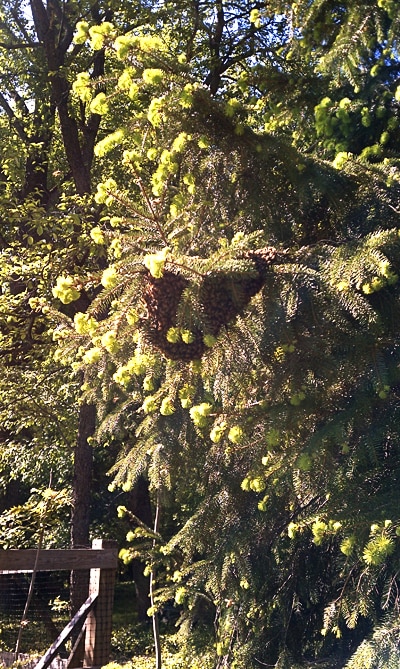 When they swarm, your hive is reduced and it reduces the strength of your hive, whatever is left of it. 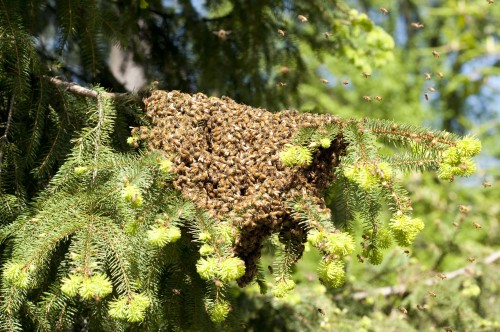 Bee swarms happen when the bees feel that they don’t have any more room for the queen to lay eggs. They are emotionally sensitive sometimes. So they make a new queen and then leave her behind and then take the old queen with them.

Once they leave the hive, they send out scouts to find a permanent home for them. And they wait together in a spot, like this branch, until the scout decides where they should move. 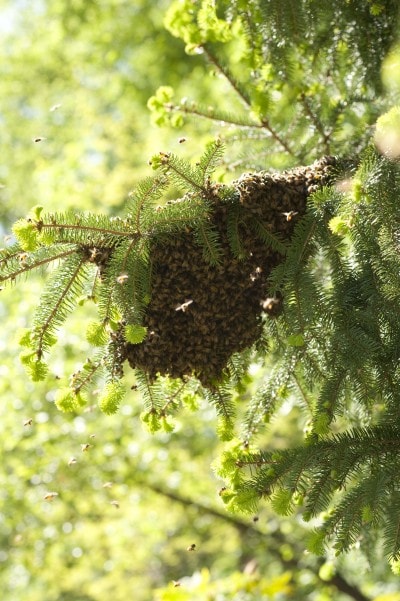 The bee world is among the most complex societies in the animal kingdom. There aren’t just scout bees, there are nurse bees to clean the house, mortuary bees to haul off the dead bees (they only have a life cycle of 28 days), the list goes on and on.

So in the case of a swarm, they leave the house with their old queen, leave the new queen behind with a few soldiers, and send the scouts out to find them a new home, while they wait patiently on a temporary place of their choosing. In this case, the branch of a conifer

Once they swarm you have to try to capture them and put them in a new set of frames. Sometimes you can’t get them, because they fly way up in a tree. But sometimes… you can snip off the branch and carry it and put it in a new box.

They are very, very tame when they swarm. They are swarming around the old queen and they have gorged themselves with honey for the journey. 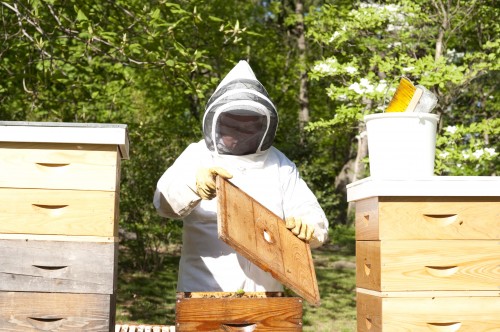 To prevent this from happening to begin with, a beekeeper has to look in the hive and see how crowded it is. You also look for queen cells, because the worker bees always have a backup.

The queen lays eggs everywhere, but the worker bees feed this particular egg/larvae something different — called Royal Jelly. And that makes it into a queen, larger than the rest. So if you see queen cells in your hive, you know they’re thinking about moving. 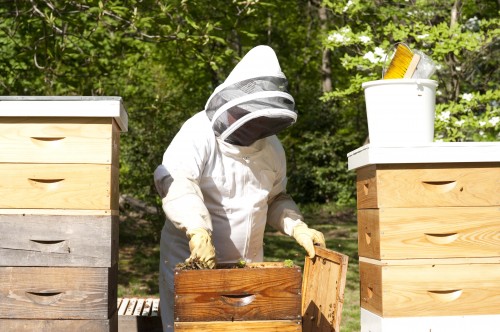 So you have a few options: you can destroy the queen cells, or add empty frames to the box for them to grow into.

But even then… like in our case, they will sometimes swarm.

That is because there is one other aspect of this whole ordeal, which is called “the queen excluder.” The deal is that when you start to put on boxes with frames that you want the bees to fill with honey, you usually put a queen excluder between the regular brood box where the queen lays eggs, and where the worker bees put honey. This is because you don’t want the queen to go into the honey frames and lay eggs. 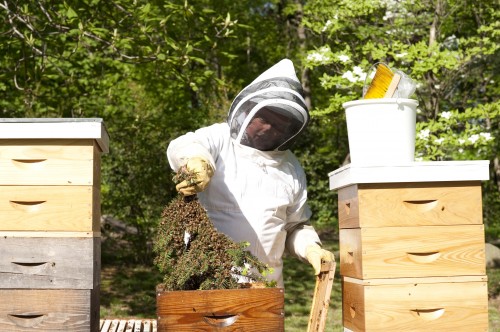 The queen exluder lets the regular bees through but not the queen, because the cells are large enough for them to fly through but she is too big.

Sometimes this can trigger a swarm because the bees are reluctant to go through it and it can make them feel confined. Like I said, they can be emotional creatures.

They think they’re running out of room when they actually have room to store honey above, but they don’t get in the mood. So they leave the hive and swarm. 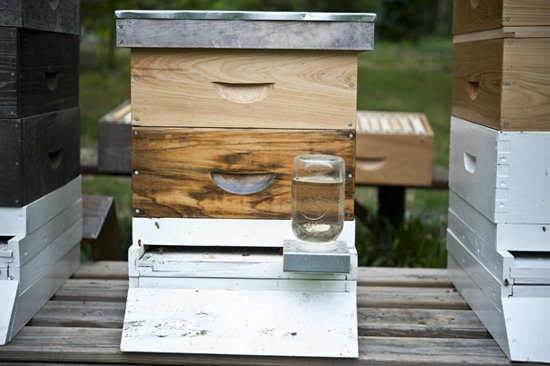 My dad, who is the master beekeeper at Tulipwood, was very energized by all the drama. He’s usually rather stoic. But he threw together a new hive from some empty frames he had in the garage, and then snipped off the branch and put the bees back in the hive.

He also added honey bee healthy, because it makes them happy and stronger. 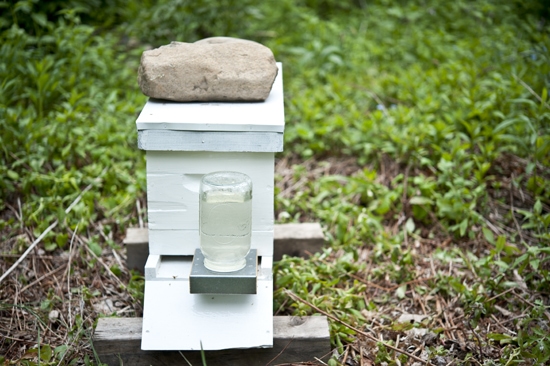 Another fun bee factoid: This is a “nuc.” It stands for nucleus and is a smaller box you use to start a new hive. For a swarm, you can put them back in a regular sized hive.

When I was in southern Norway, writing my book Food Heroes, I spent a lot of time with a wonderful beekeeper. I took a few videos of a bee swarm he had to fix. In his case, they swarmed on the side of the box so he was able to add a few stacks and then smoke them back in. The smoke makes them drowsy and less aggressive.

If you’re curious to see photos and videos of the other characters in the book, check out the For Readers Only page. Enjoy and have a great weekend!