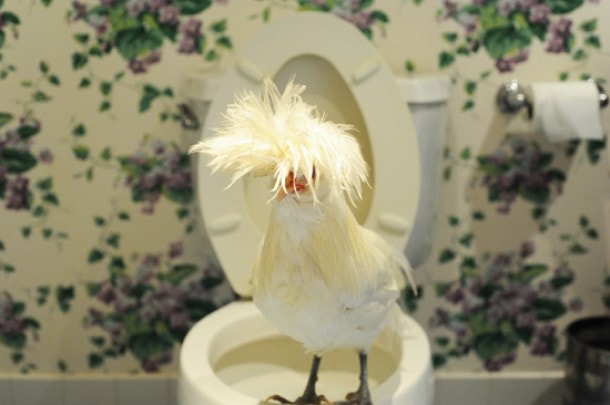 Lorenzo, formerly known as Loretta, crossed over recently. He had a complicated life, filled with ups and downs and gender changes. And I think he deserves a moment of acknowledgment on this site, since he has played such an integral part of my blogging life here in the past couple of years. 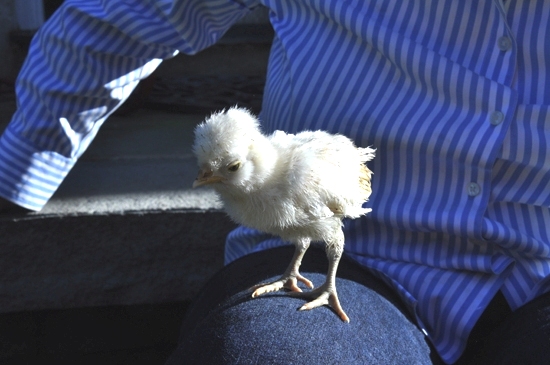 As you may recall, Lorenzo was once Loretta. He/She had quite a colorful life in her first seven months as a bird. She started out as the one “rare breed” sent to us in the little box with all the other Rhode Island Reds that arrived at the post office. She was called a “Buff Laced Polish Chicken” and she was pretty and yellow while the others were all orange. She was always a little different… more passive and sweet. If the aggressive Reds pecked at her, she just stood there and took it.

She had a bit of a pompadour, looked naturally done up, which is how she got her name — Loretta, after Loretta Young. 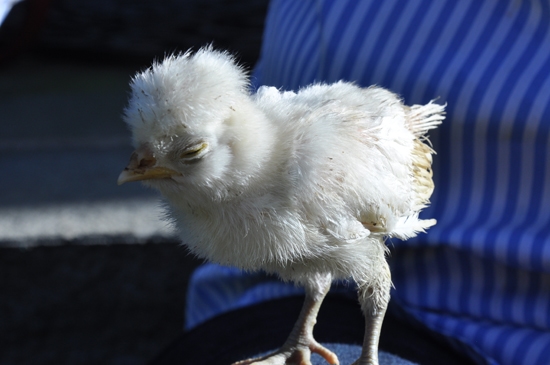 She managed to get very dirty and needed frequent baths, which made her very drowsy. 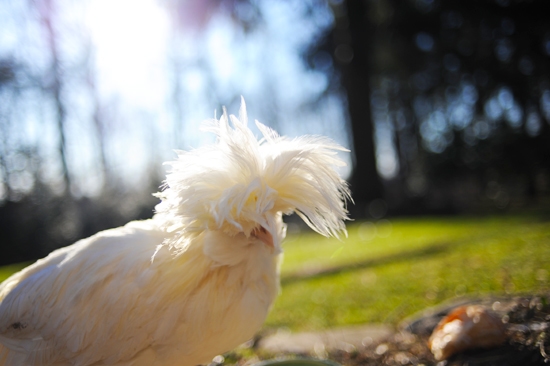 Over time, the pompadour got bigger. She couldn’t see well it came so far over her eyes. We had to trim it sometimes. 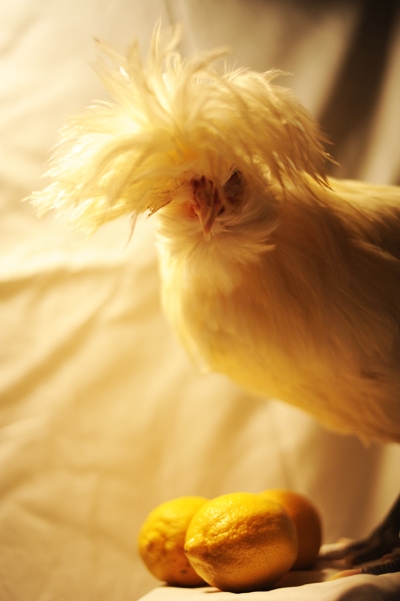 And then one day she had an unfortunate run-in with a mentally ill racist rooster named Buster and was badly injured. So she had to live inside for a while. She never recovered the site in her left eye, and so we kept trimming her head feathers so she could see out of the right side. 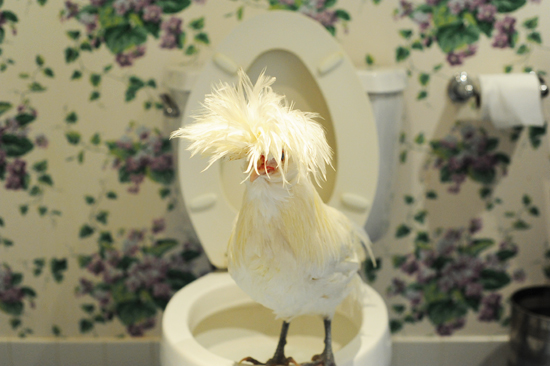 She seemed to compensate well. She participated in various photo shoots…

How many of the Rhode Island Reds could say they’d had their photo taken on a toilet? 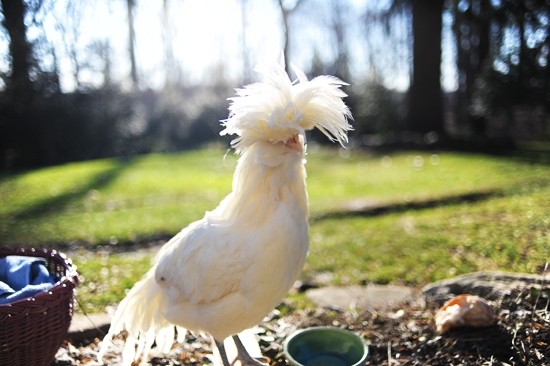 And she meandered outside when it was nice out.

But then we started to wonder…

Why wasn’t she laying any eggs? Was she that badly injured by Buster?

And then it started. She began waking everyone up at 5am every morning. 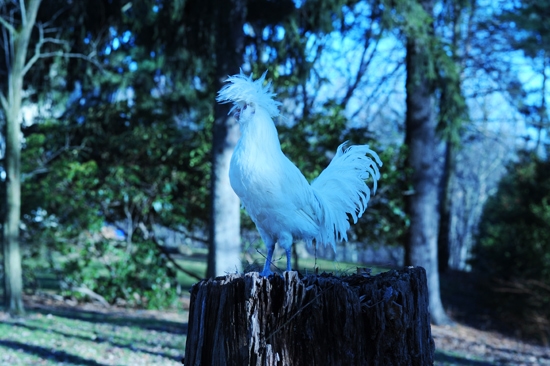 Does something seem a bit off to you about her appearance?

Perhaps we were too busy nursing her to health, perhaps she was slow to develop… but when the 5am wake-up calls began, it was time for her to go out to the chicken coop and live with the rest of the roost.

Yes my friends, Loretta was now a rooster, and was from there on out be called LORENZO.

For a while, Lorenzo really took his new job very seriously and performed his duties watching over the girls very meticulously. 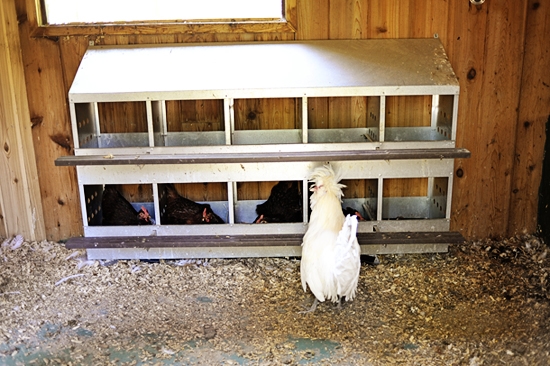 He did a very diligent job of ruling the roost. Every day Lorenzo stood watch over his girls to make sure they were comfortable and laying.

While the other girls roamed around and ate worms, Lorenzo stayed focused, and paced back and forth along the laying boxes, making sure everything was A-OK.

He didn’t go out looking for extra plump worms.

He didn’t go dig up a nice dust crater for himself to sit in.

No, Lorenzo took his job seriously and stood watch. Like a perpetual father to be, pacing the halls of the a birthing room. 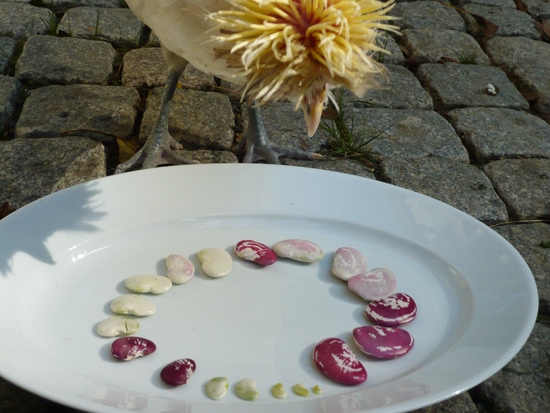 But then he had to start living closer to people again, so that we could keep an eye on him and so the Rhode Island red girls wouldn’t beat him up. They could be mean and peck. But as a result, he got to see interesting things, like the bean harvest for example, which he thoughtfully highlighted for us one day.

After a bit more drama, a bit more back and forth between the coop and the house, after a few more photo shoots, and a few more chicken diapers… yes, you heard me… 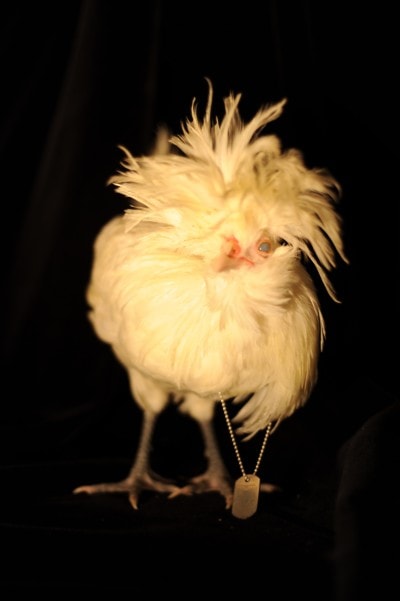 …I once thought of giving him to the IRS instead of money.

But I didn’t because I liked him in the end. He was a strange bird and let’s face it, we are all strange birds at heart.

Because at the end of the day, whether it was Loretta or Lorenzo, whether living inside or outside, Lorenzo enjoyed himself. And cracked me up. And woke me up when I visited. At very odd hours.

Recently, he drifted off in my mother’s arms, to the other side. She was very sad, but I told her that he is probably doing his dance right now, in full form, just like the one he used to do:

Lorenzo, you will be truly missed. You were a strange and good bird.