I have a thing for purslane. I think I inherited it from my grandmother. She is just obsessed with it. Whenever I visit she says, “have you seen any purslane in the garden?” 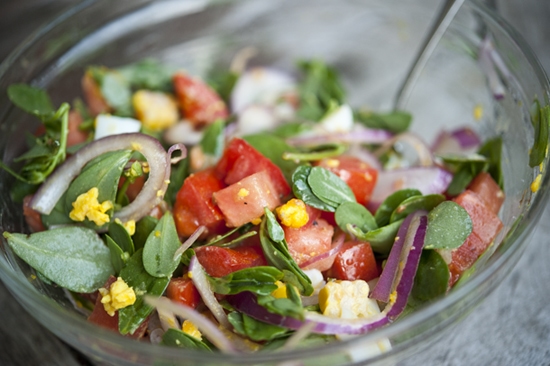 It is such an intriguing plant, purslane. For one, it is everywhere, in many countries, from the sidewalk cracks in the cities, to your vegetable garden, likely where you don’t want it to be. It is so hearty and can withstand most circumstances. The leaves are fleshy, a little salty, a little sour, a kind of built in “vinaigrette” flavor, requiring little else to make it into a salad.

But what my grandmother likes about it most is its nutritional attributes. It has an extraordinary amount of Omega-3 fatty acid, which is normally found in fish and flax seeds. It also contains vitamin A, C, B, as well as magnesium, calcium, potassium, and iron. It also has something called “alkaloid pigments” which is indicated by its reddish stems and yellow flowers. These are potent antioxidants. 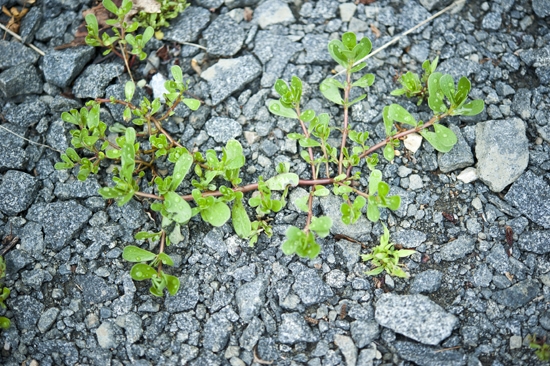 Here is what purslane looks like in one of its chosen environments: a gravel parking lot.

See? It’s perfectly content where no other plant is. 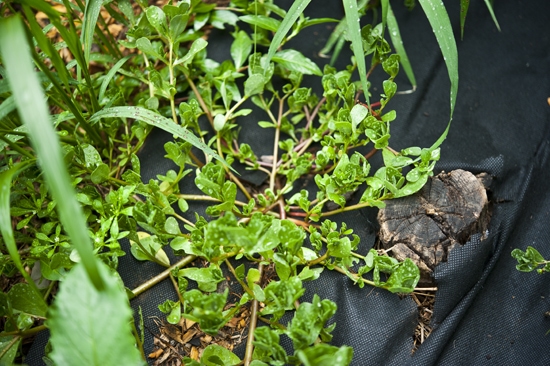 And here! In the black weed preventing strip in my garden where the vegetables are supposed to grow without competition from weeds.

Clearly the purslane didn’t get the memo. 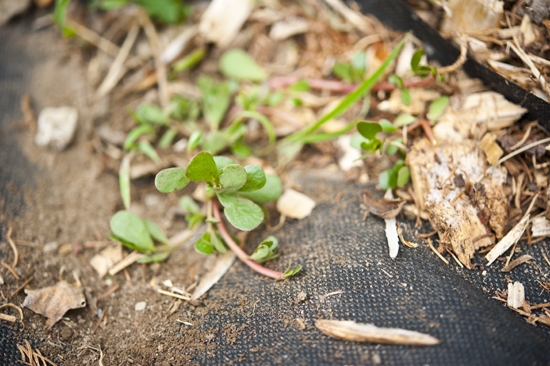 And even in the driest conditions… purslane perseveres. 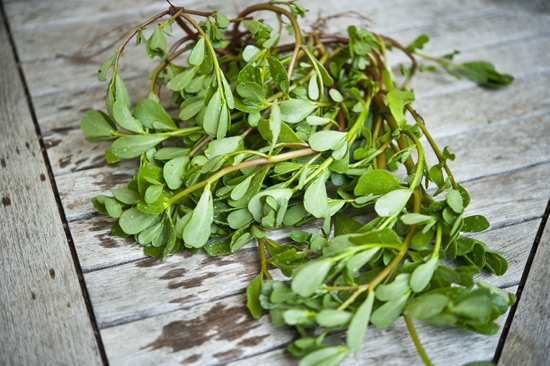 If you see it, pick it. It makes a wonderful salad. I ran to the garden last night and whipped this up for dinner and it was so very tasty. 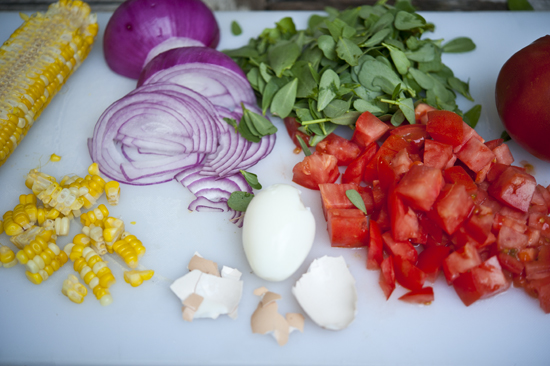 I had made a simple purslane salad a few summers ago, but this one I wanted to doctor up a bit more. I was feeling colorful. And there were some fresh eggs from the chicken coop that needed tasting. 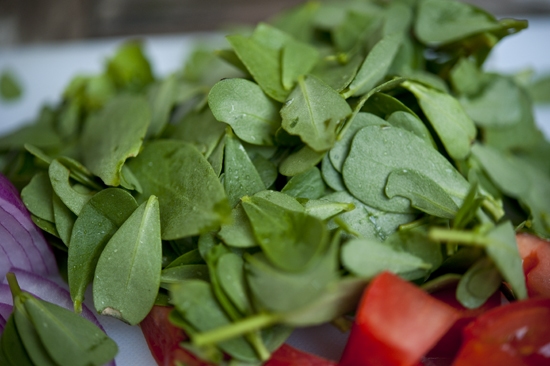 You can also eat the purslane leaves and flowers if you so desire. They are for the slightly more adventurous crowd, and my dinner table companions weren’t perhaps ready for that. But the leaves have a wonderful tangy flavor. Which means you don’t even need vinegar. 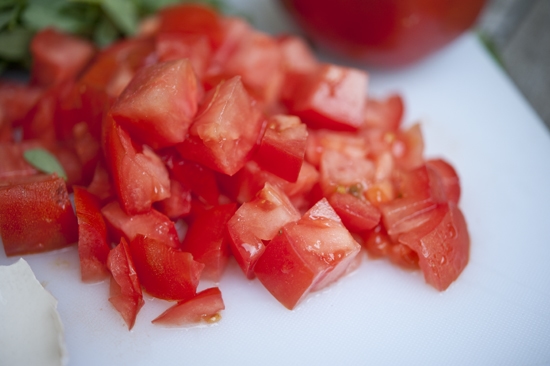 Dice some tomatoes into small pieces. Some colorful heirloom tomatoes would be nice here as well. 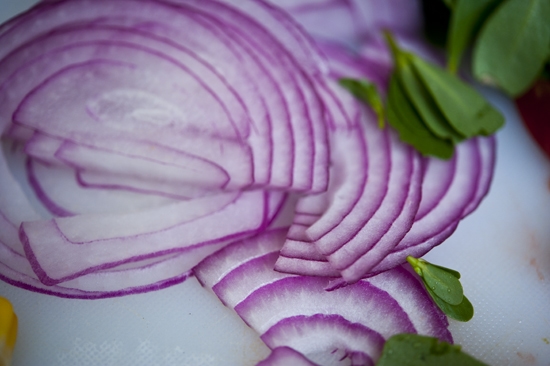 Thinly slice some red onion. White onion would also be tasty. In fact, that is what I use for my other purslane recipe. 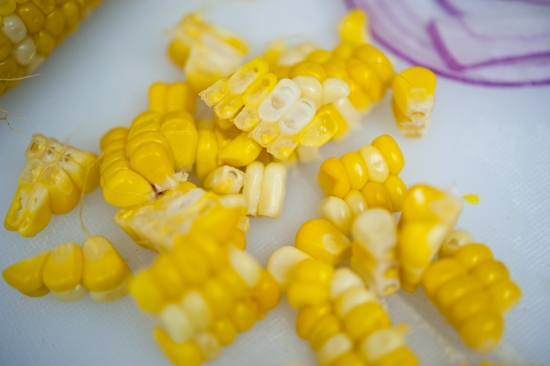 Cut some fresh corn off of the cob. I prefer my corn raw, something else I inherited from Grandma Pellegrini. She gave me a whole speech yesterday about how she used to go pick up a bag of corn from the farm stand, then shuck a piece and eat it raw on her drive home.

Some things never leave the DNA. 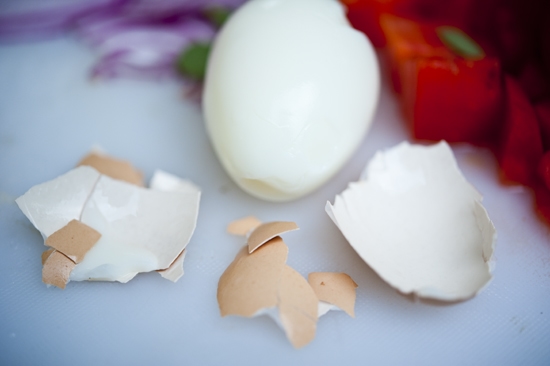 Hard boiled egg makes this salad for me. I just love hard boiled egg in my salads. This one has an especially bright orange yolk which looked pretty in the dish. 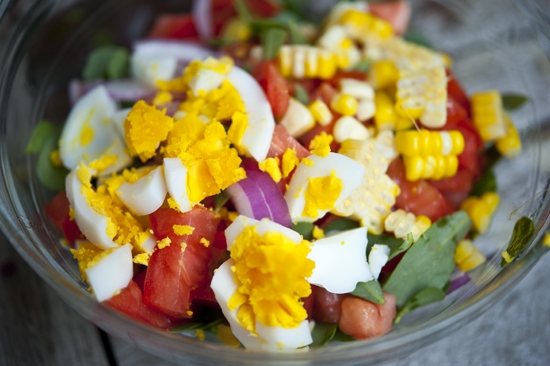 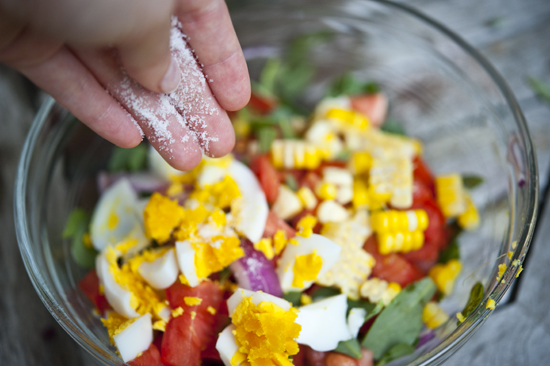 Add a little sea salt. This will help release the juices of the tomato and will add to the “dressing” of the salad. 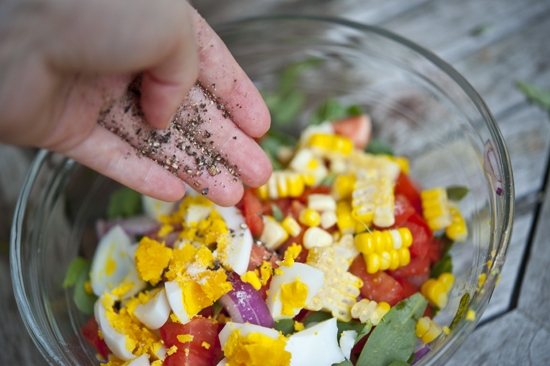 Also add a little freshly ground pepper for some spice. 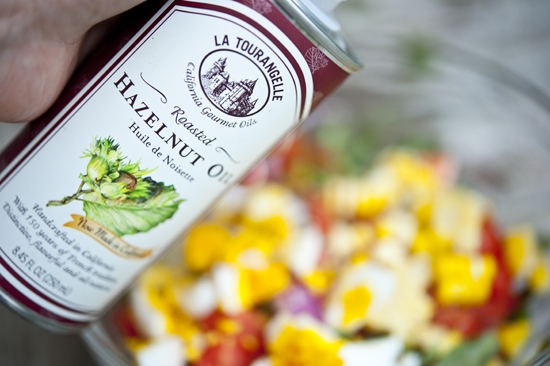 Then, to give it a third dimension I added some nutty oil. You can use your favorite finishing oil, including a high quality extra virgin olive oil. All you need is a touch. 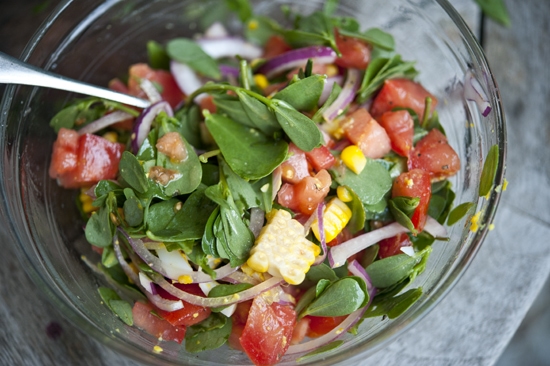 Give it a nice stir so that the flavors meld together…

And there you have it! If you come across some purslane (it’s in almost every farmers market now) give this a try. There are so many wonderful variations you could dream up.

Here is my other, simpler Purslane Salad Recipe. 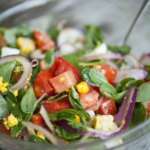