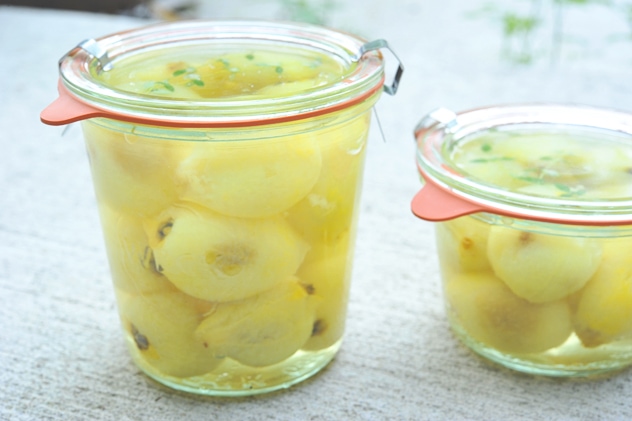 It all began when I was watching the squirrels. This is what I do sometimes when I sit in a wicker chair with my breakfast and ponder life and the creek below.

The squirrels were gnawing most voraciously on a yellow fruit, many of which had dropped to the ground.

So I wandered my way over and this is what I saw, dangling from the trees that up until now I hadn’t paid much attention to. 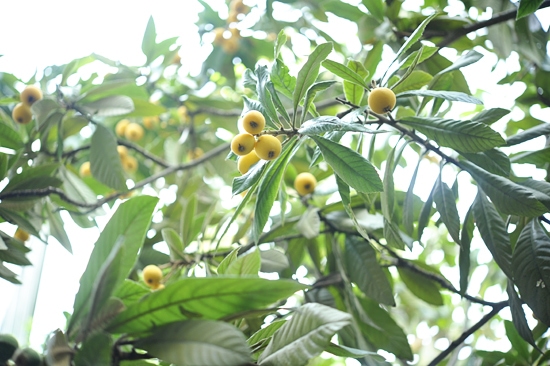 What were these strange yellow jewels that the squirrels loved so much? The ripest ones were a dark golden color and were dropping to the ground.

I rolled it around in my hand.

I rubbed off the white fuzz until it was smooth and shiny. 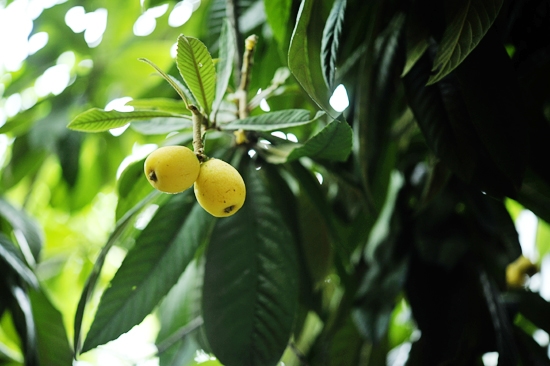 I realized that what I was thinking and what I was about to do was probably a risk. And so I should say, don’t try this at home, but… I have a streak in me that cannot be stopped sometimes.

And so I took a bite. 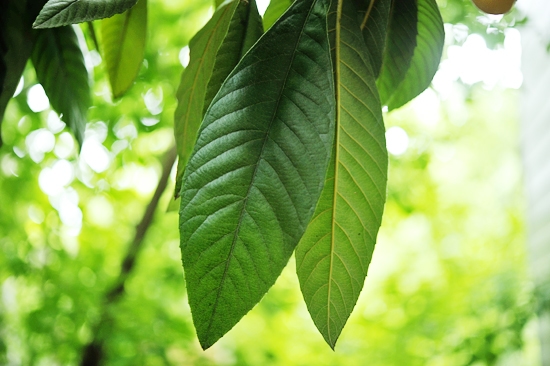 This isn’t a tree that is familiar to me, being that I’m from the Northeast where we don’t have such tropical looking things. And in that moment I decided I needed to take a horticulture class.

I should also mention that my friend was visiting me from out of town and watched in horror as I took a bite.

“It was nice knowing you,” I said with a wink.

An hour later, I was still feeling perfectly fine. Then I had some more friends come over for a barbecue and word got out about the strange fruit I had eaten.

In that moment, we were divided into two distinct factions. Those that said, “heck, I want to taste it,” and those who looked at us in horror.

One person did pretend to pass out because it was April Fools Day, but I didn’t get too concerned.

Then a bright fellow in the bunch decided to do some research to see if we were all going to have to take a trip to the emergency room. He did some research on his hand held thingamabob that seems to always have an app for everything.

And lo and behold he found a picture of the exact fruit we were eating.

It was called a: Loquat.

Apparently, it is originally from China and is sometimes called the Chinese or Japanese plum.

And even better, you can make: loquat wine, loquat jam and jelly because of its high pectin content. They also soothe the throat.

Amazing! I was the owner of a fruit tree! So you can guess what I did… 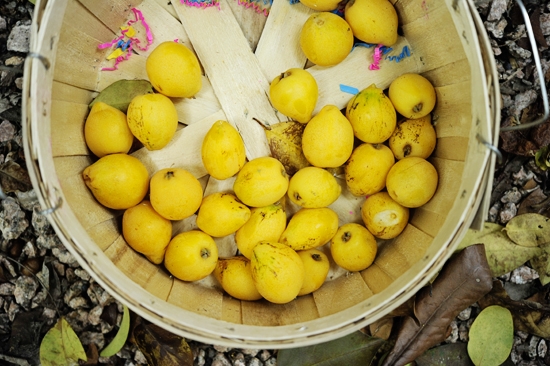 I picked these babies and didn’t look back. Why should the squirrels have all the fun? 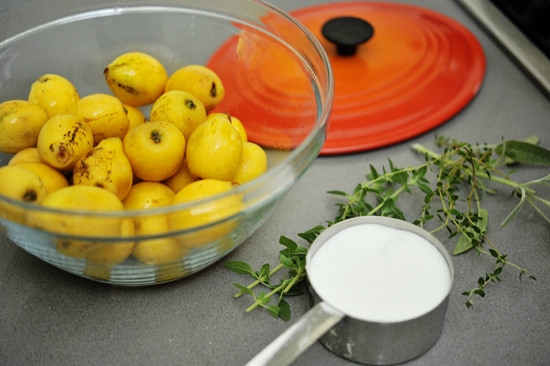 Here is what I did with them.

I made an herb syrup and I invented the word “semi-syrup” since it wasn’t a true simple syrup, there was more water than sugar, about 3:1.

Then I grabbed a handful of fresh herbs that I have growing: thyme, sage, and oregano. 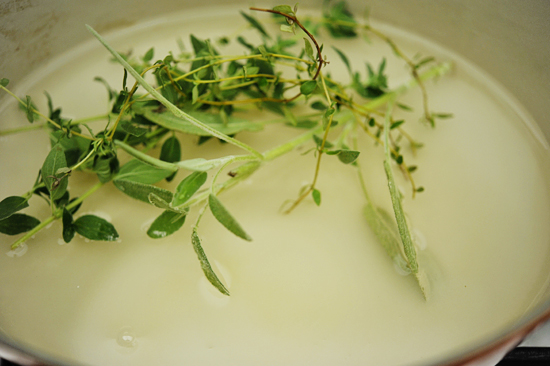 Dropped it all in a pot and gave it a stir. 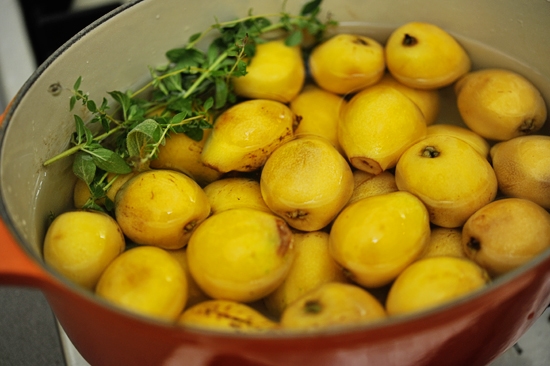 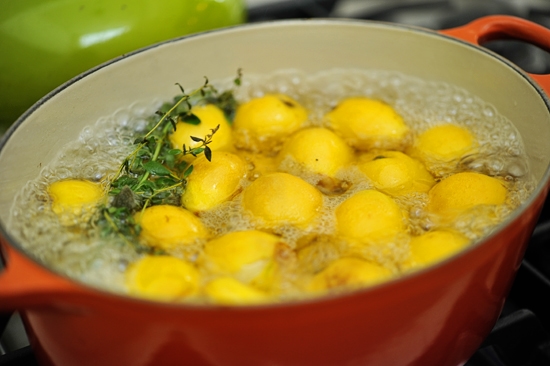 Brought it all up to a simmer, turned off the heat… 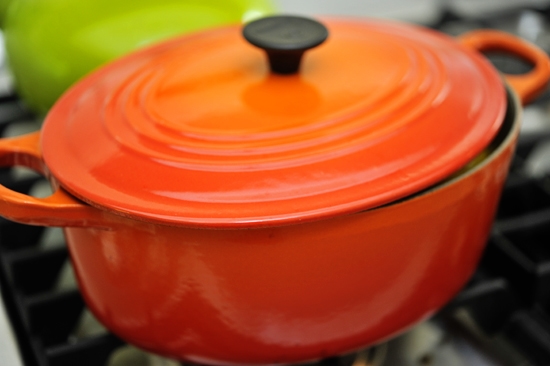 Covered it partly and let the liquid come back to room temperature. 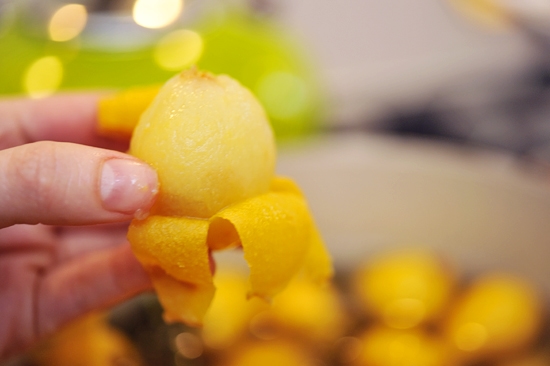 As it cooled the loquats absorbed the herby sweetness of the syrup. And they peeled very easily by hand, though you could use a paring knife (but it’s not as fun). 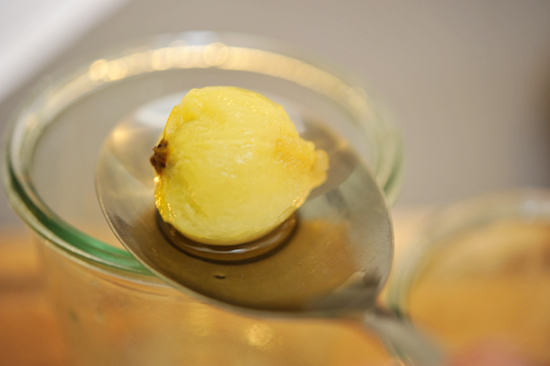 I slipped the skins off of them one at a time… 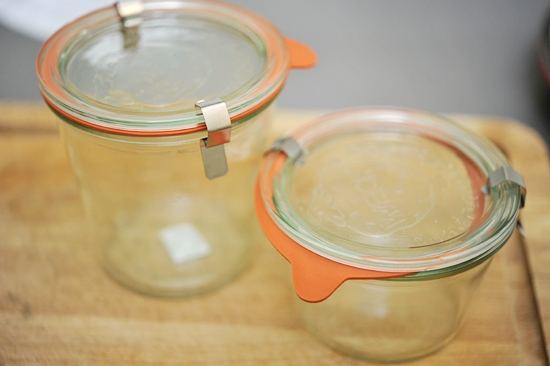 And used my favorite jars in the world… well equal to the mason jar: Weck jars. 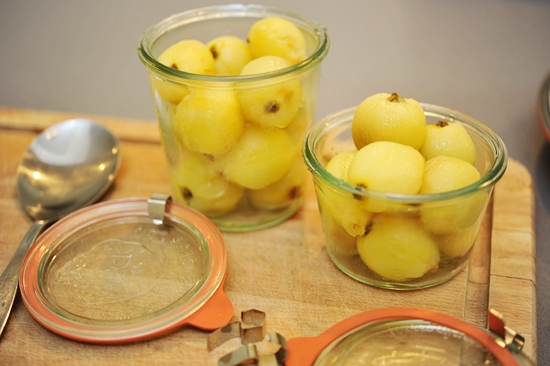 And I piled the peeled, poached loquats into them. 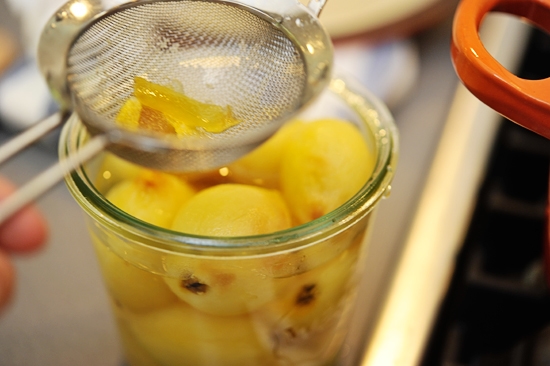 Then I ladled some syrup in through a small strainer until it reached the top of the jars. 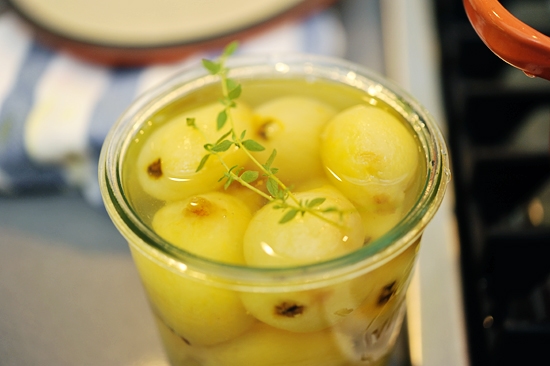 Then for good measure and for whimsy I dropped a few extra sprigs of thyme on the top for appearance sake. 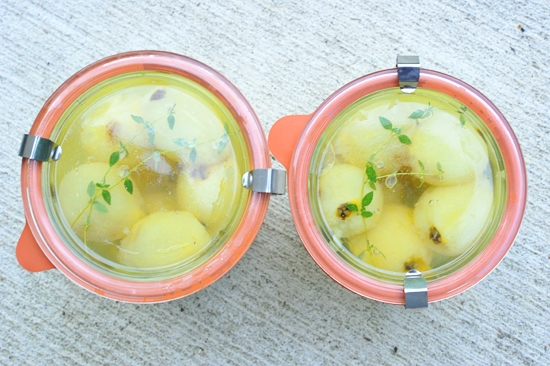 They looked lovely and the flesh of the poached fruit tasted vaguely like almonds, but sweeter. And tangy too.

It was magical, unlike anything I’ve tasted.

I plan to serve these with a dollop of creme fraiche or cold thick cream or ice cream.

Sometimes moving to a new climate will bring delightful surprises. Of course, if you don’t have loquats near you, this recipe will be great with pears or peaches. 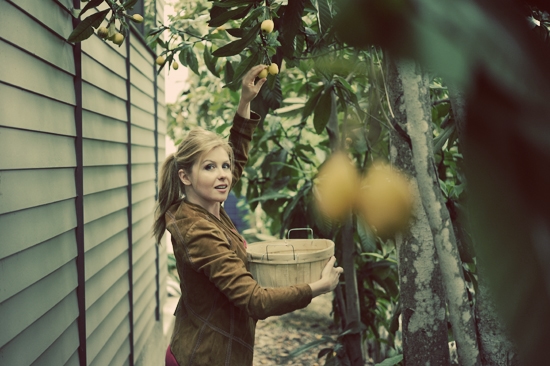 And that my friends, is the loquat lowdown. 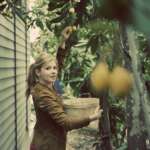