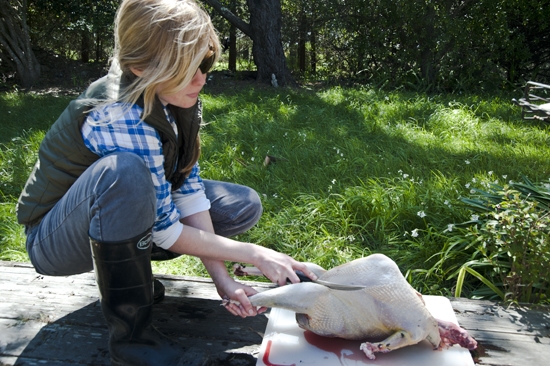 In part 1, I talked about my tips for field dressing and aging game birds. And though my preference is to keep birds whole with skin on whenever possible, here are several other options when the circumstances call for it:

On skinning a bird…

There are times when a bird has been too badly damaged to keep the skin in tact. In this case, you can skin the bird, while keeping it whole. When cooking a bird without skin, it is a good idea to blanket it in layers of lard or bacon to keep it from drying out during cooking.

1. To skin a bird, feel for the socket and remove the wing by taking a knife and cutting it at the first joint.

2. If the bird has long tail feathers, like the pheasant does, you can remove them fairly easily by pulling on them.

3. Below the thigh, at the “knee” of the bird you can cut around the knee gently and then use pliers to pull at the tendon to release the lower half of the leg. Repeat for the other leg. For smaller birds, kitchen shears will be all that you need.

4. Turn the bird on to its back and feel down the neck to locate where the neck connects to the body and cut with kitchen shears at this point to remove the head.

5. Make a small incision along the breastbone. You will be able to easily peel off the skin and the attached feathers from the body of the pheasant.

6. Remove the innards from the bird. In the pelvic area between the bird’s legs, you can find the base of the breast meat. You can reach in and slowly pull away a small part of the breast meat up and away from the pelvic bone. Once you have made a small separation with a knife or scissor, reach in, take hold of the innards and pull them out of the bottom of the bird. Save the gizzard, heart, and liver, they’re tasty! 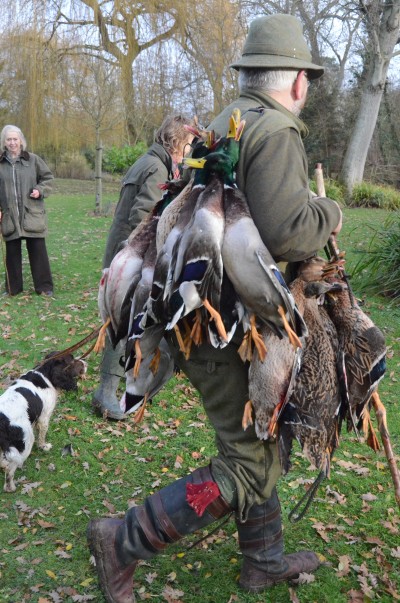 Some people like to breast their birds, especially when they are small. This requires much less plucking, in some cases none at all if you don’t plan to leave the skin on. I like to leave the skin on whenever possible, so I pluck the area before removing the breast.

3. You can easily remove the skin off of the breast meat at this point, or keep it on for added flavor and moisture.

On breaking down a bird…

After your bird has been aged and defeathered, you can either roast it whole or butcher it into sections. This will depend on the bird, its size, and its age. The younger, smaller birds are better whole than the larger, older ones, because the older legs tend to be tougher and thus need more cooking time than the breast meat.

1. Make a cut along the seam where the leg and side of the bird meet and pop each leg joint back. Sever the joint and remove the legs. Cut the wings at the first joint.

2. To create two breast portions, cut along one side of the keel bone, the bone that runs between the two breasts. Carefully carve down along the bone until one breast is removed, then repeat on the other side of the keel bone. You will also need to free the meat from the wishbone on the neck end. You can also keep the breastbone in by breasting, as shown above, then cutting the keel bone in half lengthwise with a large knife.

3. If you plan to sear the breast meat, remove the tenders—the thin strips of meat (the most tender part of the bird) found on the underside of the breasts. This will help it cook evenly. The tenders can then be seared separately and enjoyed on their own. 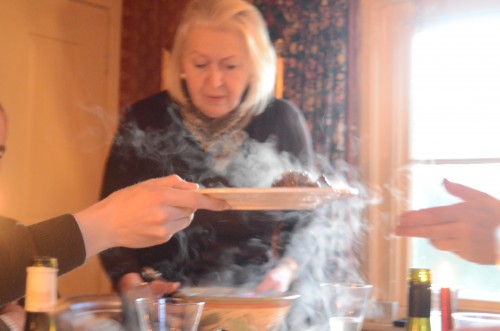 Large whole birds are best trussed to help them cook uniformly and retain moisture. Smaller birds don’t require serious trussing, in some cases, merely a toothpick through the legs.

1. With the bird breast side up, lay the twine* across the ends of the drumsticks

2. Bring the ends of the twine around the drumsticks and up between the legs, crossing the two ends over the cavity and along the sides of the breasts.

4. Turn the bird over and pull the twine through the first joint of the wings.

5. Bring the twine together tightly and tie a secure double knot in the space between the wings. Snip off the excess twine.

*Note: For very small birds, like woodcock and quail, you won’t need to use twine. Instead, insert the tip of a knife at the end of one drumstick and make a 1-inch slit though the leg, between the tendon and the bone. Insert the other drumstick through the slit to secure the legs, or even more simply, secure them together with a toothpick.

Wishing you many tasty birds at the dinner table! Feel free to add your own handy tips in the comments.