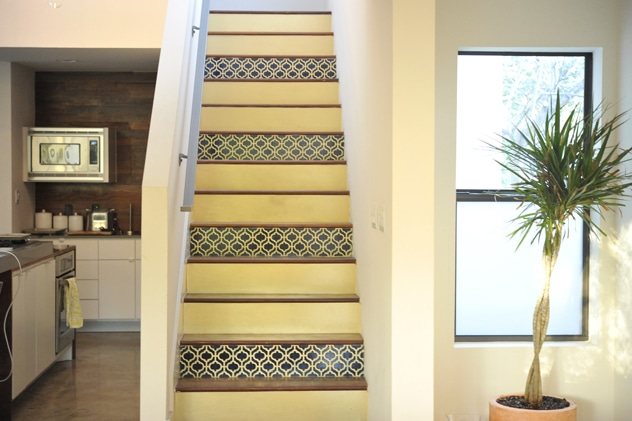 Well, I completed one of the craziest home decor projects EVER. It made me hate life a few times. There were times when I thought about throwing myself in the stream running alongside my house and living with the giant turtle who has a nice life there. Where my turtle friend lives, there aren’t any unreasonable home decor projects.

But then I decided to be a grown up and face the mess I had created. I figure we can all learn from our mistakes, eh? Or even better, you can learn from my mistakes so that you can attempt this project without wanting to move to the stream with a giant turtle.

Okay… so if you’re feeling bold and want to try this at home… here is how it turned out: 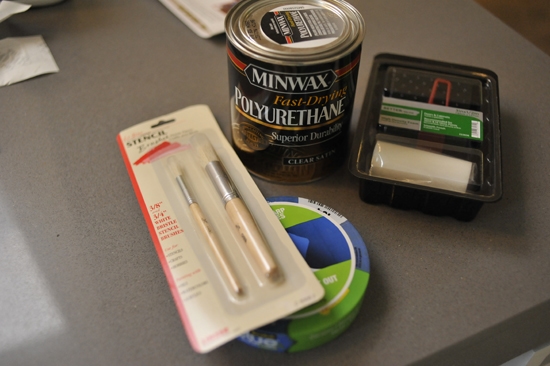 Some of the brushes we tried (spray paint worked best). Along with the tape and polyurethane finish. 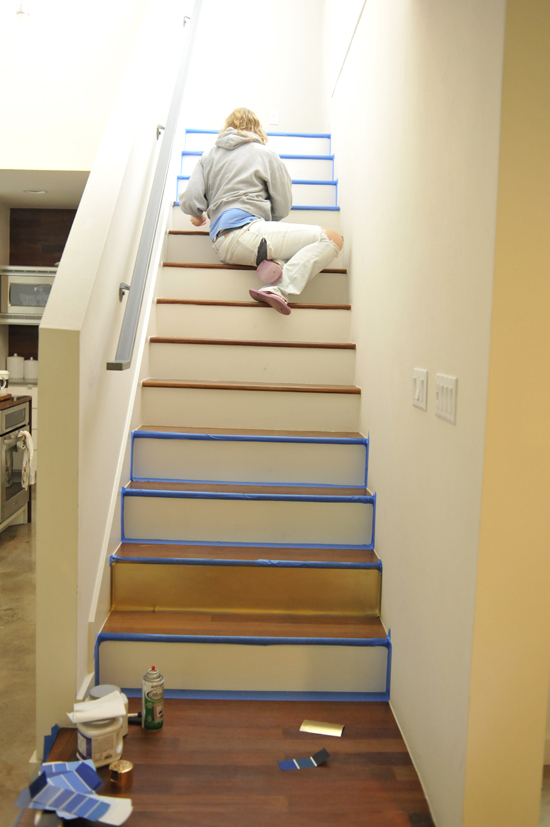 That’s my helper Laura who was fearless in this project with me and taped the stairs 1.2 million times. At least we lost brain cells together when we played with spray paint… we’re bonded for life! 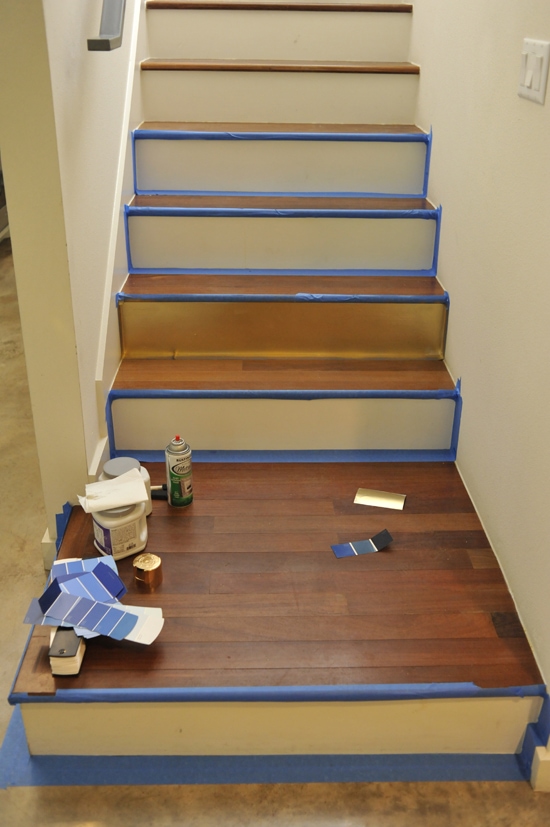 Here are all the paint samples we played around with when deciding on the blue color. We opted for something super dark and rich looking… a deep navy. It’s a good thing that it came in spray paint form when we changed gears from brush on to spray. 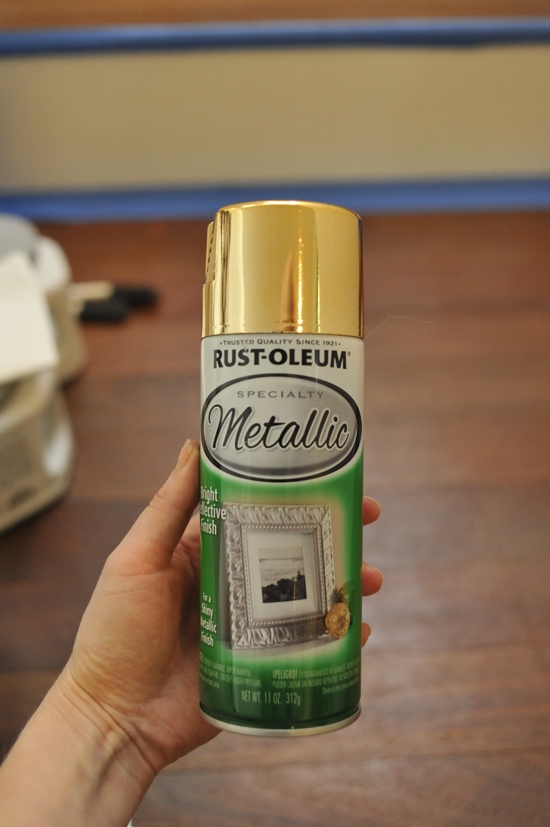 Here is the brand of spray paint we used in both gold and blue. 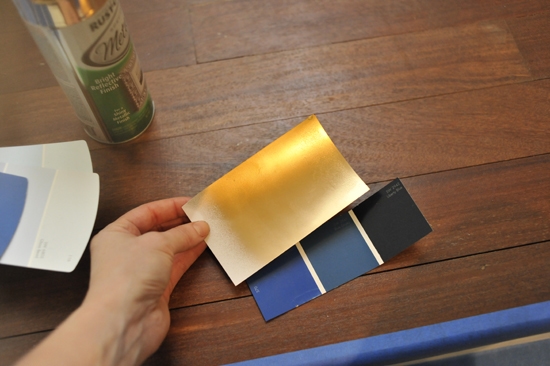 There are some other golds out there… this one had a more rosy copper tint. 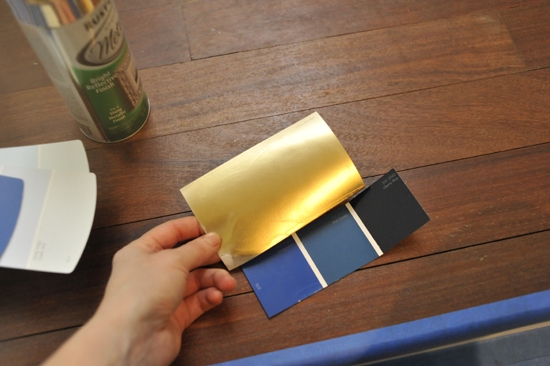 But I went with the Rustoleum brand because it was more shiny and metallic. 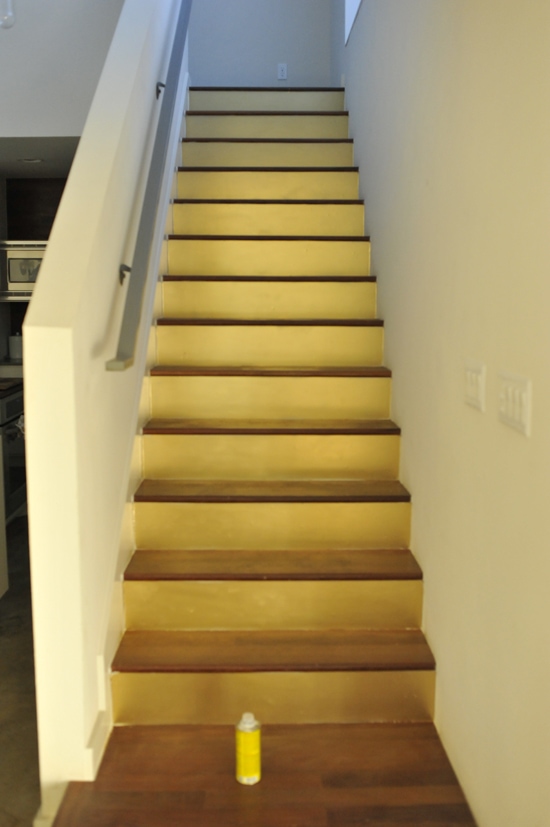 Here is what it looked like when we painted it all on. We took the tape off temporarily because I had dinner guests coming over… I don’t recommend that, it takes a lot longer to tape your stairs up twice! 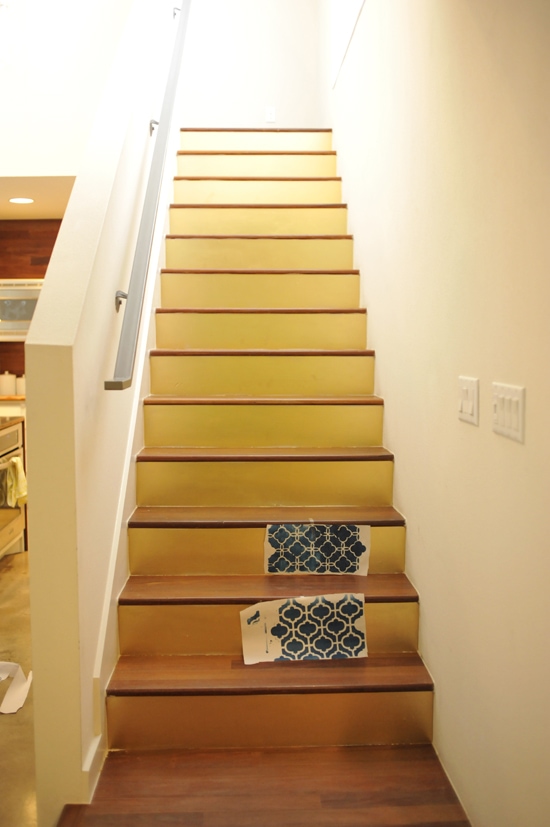 We tried the stencils out on paper to see how we felt about them. That helped us plan our pattern and ultimately helped us realize how much work it was and that… more was less! Which is why I opted for just one of the patterns. 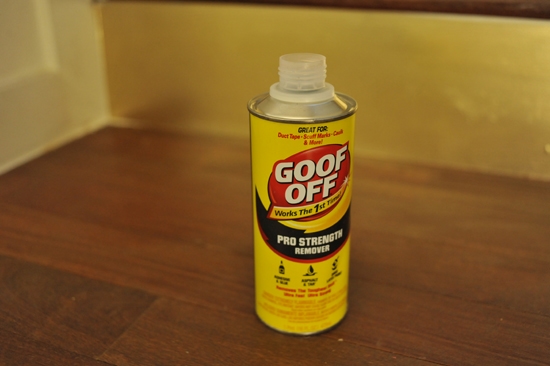 This is the stuff that I used to get ambient spray paint off of the wood. 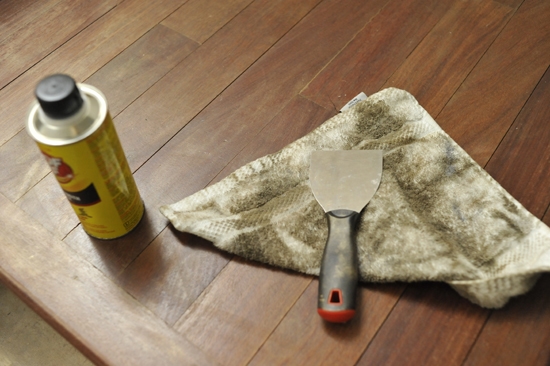 Get a rag and a spackle blade. 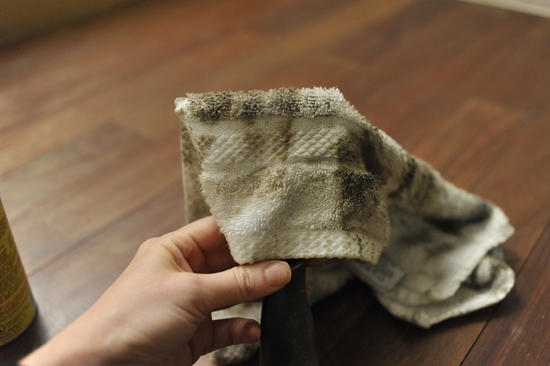 Cover the blade with the rag. 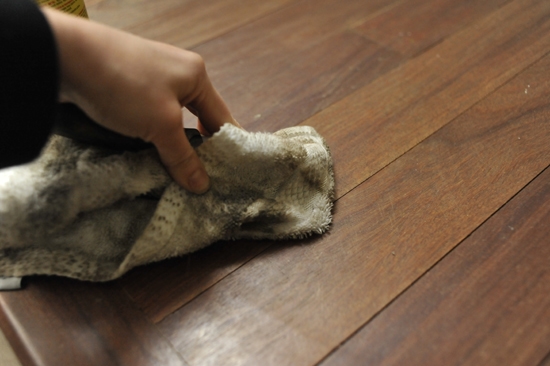 Douse it in Goof Off and rub away. 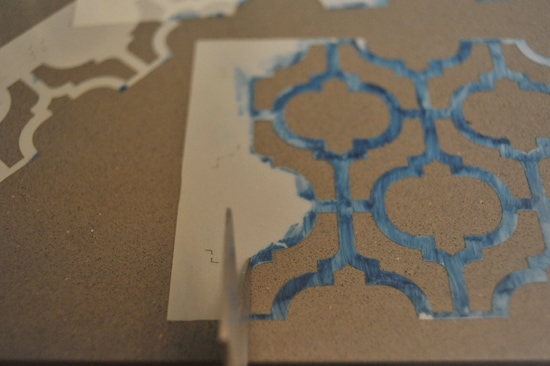 The stencil is strange and you really need to trim the end so it looks like the rest of the stencil so that you can overlap it properly. At least in the case of this stencil. 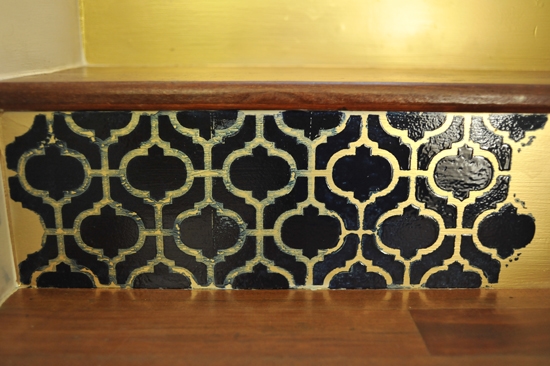 If you used oil paint and brush it on it is too thick and sticky. See what I mean? Add the spray adhesive into the mix and it’s a big ol’ mess. It really bleeds into the places it shouldn’t. 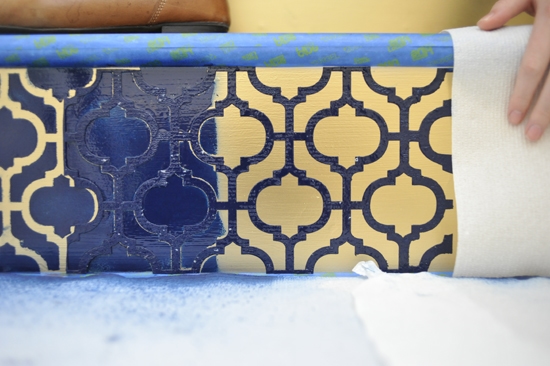 But if you apply the Vaseline on the back, lay it down and use spray paint, it is thinner and bleeds less. Be sure to place paper towel over the end of the stencil where you don’t want the blue to go, because the spray paint will travel far. 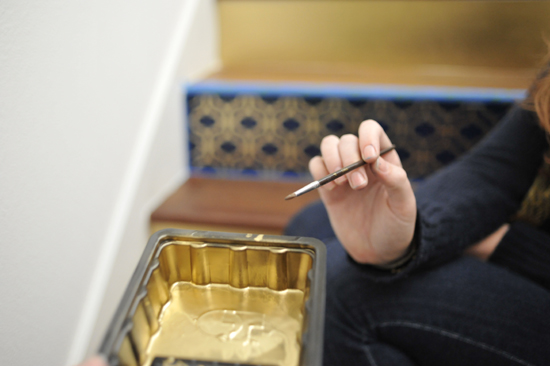 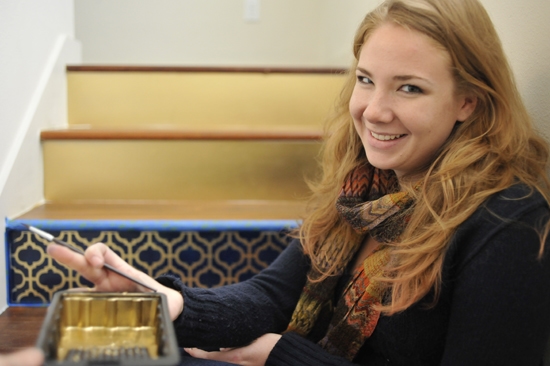 If someone is helping you they will hate you by now! Be prepared.

You’ll want to go live with the turtle in the stream at this point. 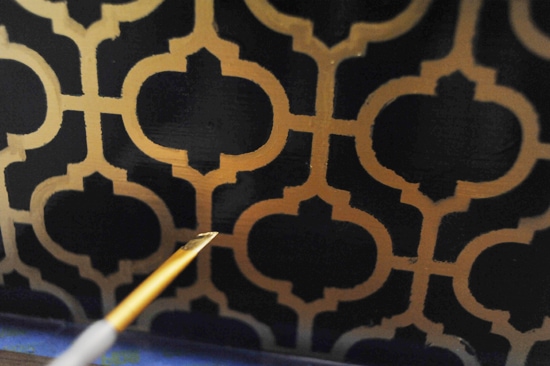 And carefully apply it in all the places that need a cleaner edge. 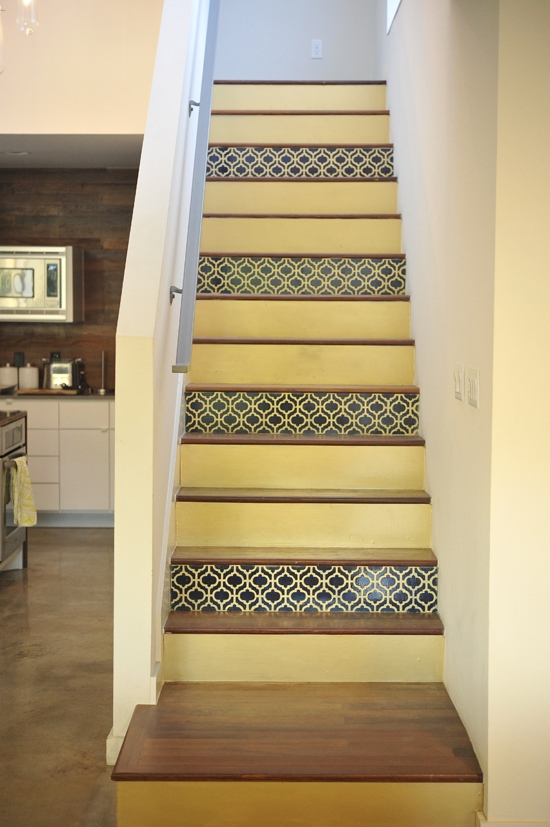 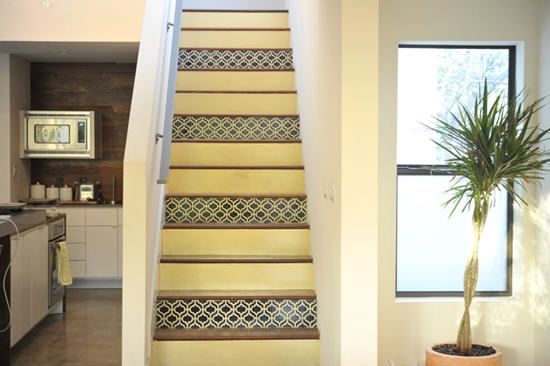 It will look like this when you’re done. I love it! I’ve just blocked out what it took to get there.

Give it a try! If you dare… just pay attention to my list of hard-won-lessons. 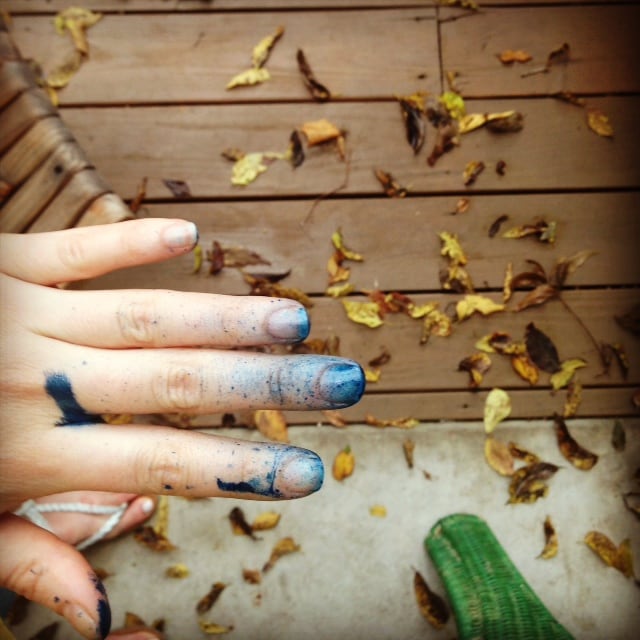 p.s. Expect your hands to look like this. You can do what Laura did and just paint your nails with blue nail polish after. Or you can do what I did and say it’s the dye pack paint in the fake cash from your bank robbery.