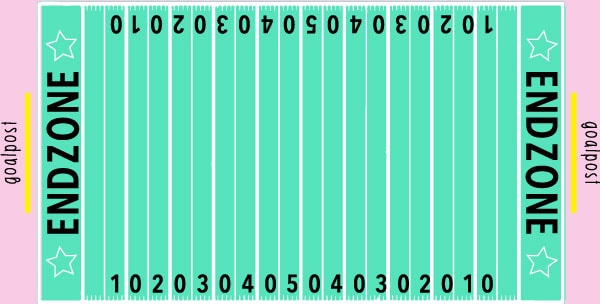 Thanksgiving is tomorrow! Many Thanksgiving feasts also come with a side of football watching. If there’s a bit of time between feasting and the game you can also serve up some of our favorite tailgating recipes as appetizers.  Some of us around here (ehem, Georgia) were looking for a Girl’s Guide to Football that breaks down all the basic terminology you should know, so you can have a better understanding and enjoyment of this nostalgic game.  So we put one together for y’all. Enjoy and happy feasting, we’re Thankful for YOU. 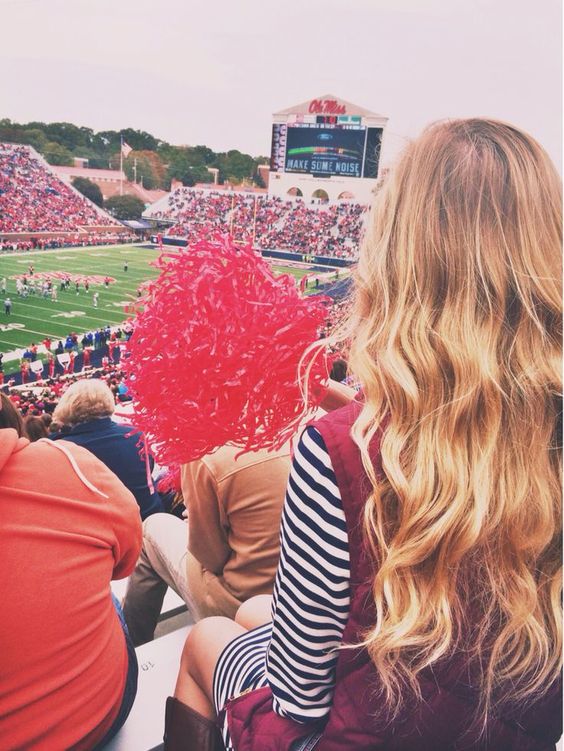 First things first, you’re going to want to know the setting where everything goes down. So in the case of football, we begin with the field.

Endzone– basically the ends of the field which say the team names. This is also where the team will catch/run the ball to and score a touchdown.

Goalposts– these are the big yellow things at the end of the endzone. When a team kicks the ball through these, it’s called a field goal (field goal = 3 points) they also kick it through following a touchdown which is an extra point (extra point = 1 point)

The Line of Scrimmage– is the invisible line (although it will show up as a graphic on your tv screen) that the ball is on the field. The offense lines up behind the ball and the defense lines up opposite of it. Teams MAY NOT PASS the line of scrimmage until the ball has been snapped.

First down– 10 yard gain that the offense has 4 downs to gain. 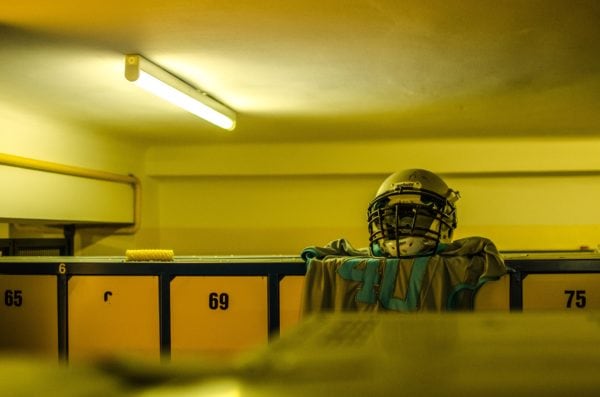 Quarters– football is played in four 15 minute quarters. So, how in the world do games last for so long, then? Well, the clock stops in between each play for the teams to reset their positions, not to mention nearly every game is televised so you have additional tv timeouts for commercials. The clock counts down, so at the start of each quarter, the clock will read: 15:00.

Halftime– this is a 20-minute break where each team heads to their locker room between the 2nd and 3rd quarter.

Timeouts– each team receives three 30-second timeouts per half. Totally to 6 timeouts per game. Teams DO NOT have to use all their timeouts. Timeouts are taken so the coach can talk to his players or challenge a call made by a referee.

Down or a play– is the time between the whistles. Remember the offense has 4 downs to gain a first down (10 yards).  Down is also the terminology used to describe when the player in possession of the ball knee makes contact with the field.

Punt– this is when the kick the ball to the opposing team (without the use of a kicking tee) on 4th down a result of having not gained enough yards for it to be likely to gain a first down on 4th down.

Dead Ball–  the period of time between plays when the ball is no longer in play, which is determined by the officials signaling the play to be over.

Interception– a pass that’s caught by a defensive player, ending the offense’s possession of the ball.

Sack– when a defensive player tackles the quarterback behind the line of scrimmage for a loss of yardage.

Snap– the action in which the ball is hiked (tossed between the legs) by the center to the quarterback, or to the holder on a kick attempt, or to the punter. When the snap occurs, the ball is officially in play and action begins.

Kickoff– a kick (the receiving team can’t make an attempt to block it) that puts the ball into play. A kickoff occurs at the start of the first and third periods and after every touchdown or successful field goal.

Blitz–  a defensive play in which a linebacker or defensive back vacates his normal duties in order to pressure and attempt to tackle and sometimes sack the quarterback.

Coin Toss–at the start of the game, the captain of the visiting team calls heads or tails of a coin flipped by the referee. The winner of the toss will then decide if they would like to start the game on the offensive or defensive side of the ball. 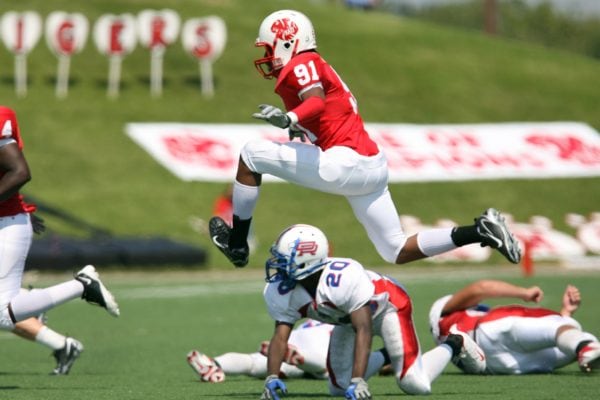 Touchdown– This is a cause for celebration. It’s when the ball reaches the endzone and is caught by the offense (the team with possession of the ball). The football can also be run into the endzone.

Extra point– after the touchdown, the kicker comes out and kicks the ball through the goal post.

Field goal– when a touchdown isn’t possible and team is close enough to the endzone, they have the kicker come out and kick the ball through the goalpost.

2 point conversion– this doesn’t happen often. It’s when the team tries to get the ball into the endzone after a touchdown instead of kicking it into the goalpost. This move is risky BUT necessary if the extra point isn’t enough to beat the other team and there’s little time left on the clock.

Safety– This is a SUPER RARE way for the defense to score points. Occurs when an offensive player is tackled with the ball in his own endzone. 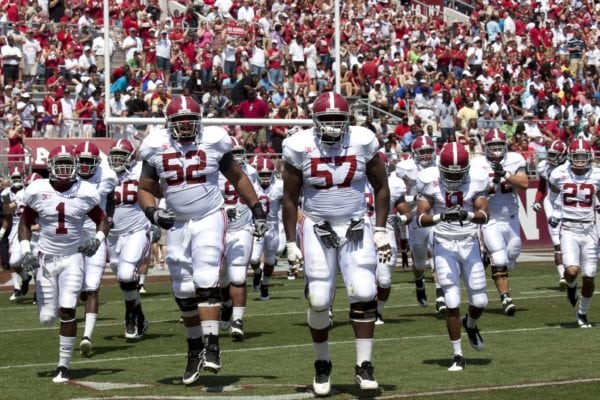 *There are always 11 players on both sides of the ball for each team.

First, you need to know whether a player is an offense or defensive player.

Offense– This is the team with possession of the ball trying to cross the other team’s endzone.

Defense– the team defending the endzone. Basically the opposite of the above.

Special Teams– these are basically the players who are responsible for coming out when a ball is kicked or punted and possession is changed from one team to another. Not quite offense, not quite defense thus we call them special teams.

Quarterback– this is the player on the offense whom the ball is snapped to. He’s basically the leader of the offense who often calls the plays and is responsible for throwing and handing off the ball to other players, although he can also run it himself too.

Receivers– offensive players responsible for primarily for catching the ball. There are a few different kinds of receivers (wide, slot, tight end, and running back).

Lineman– usually bigger guys, on both offensive and defensive sides of the ball who line up at the line of scrimmage.

Running back– the offensive player most likely to be responsible for (drumroll please) RUN the ball. 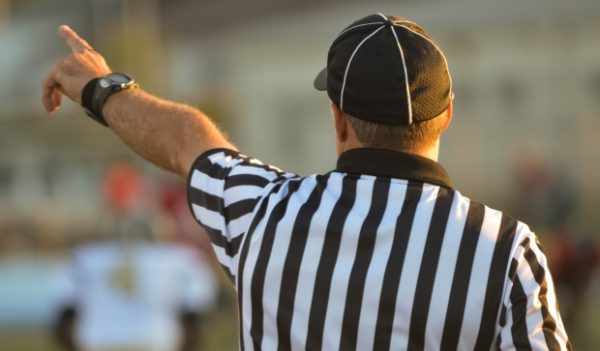 Offsides– when the defensive player crosses the line of scrimmage before the ball has been snapped.

The result: The offense gets to move forward 5 yards; therefore, they will have 5 fewer yards to cover to get a first down and the down is replayed.

False Start– (basically the opposite of the above) when an offensive player crosses the line of scrimmage before the ball has been snapped.

The result: The offense will lose 5 yards; therefore, they will have 5 more yards to cover to get a first down and the down is replayed.

Pass Interference– when a defensive player makes contact makes contact with the receiver (the player who a pass is intended for) before the ball gets to him.

The result: a whopping 15 yard pick up for the offense which results in an automatic first down.

The result: 10-yard penalty and a replay on the particular down.

The result: a 10-yard gain for the offense resulting in an automatic first down.

Personal Foul– any action that appears to be done in order to intentionally harm another player.

The result: 15-yard penalty. In certain nasty situations, a player can be ejected from the game.

Which team are you routing for? Share below or tag us on social media.

Life Hack: Can Time Blocking Change Your Life?
How to Prepare for Houseguests + Free Wifi Printable
How to Reduce Your Food Waste