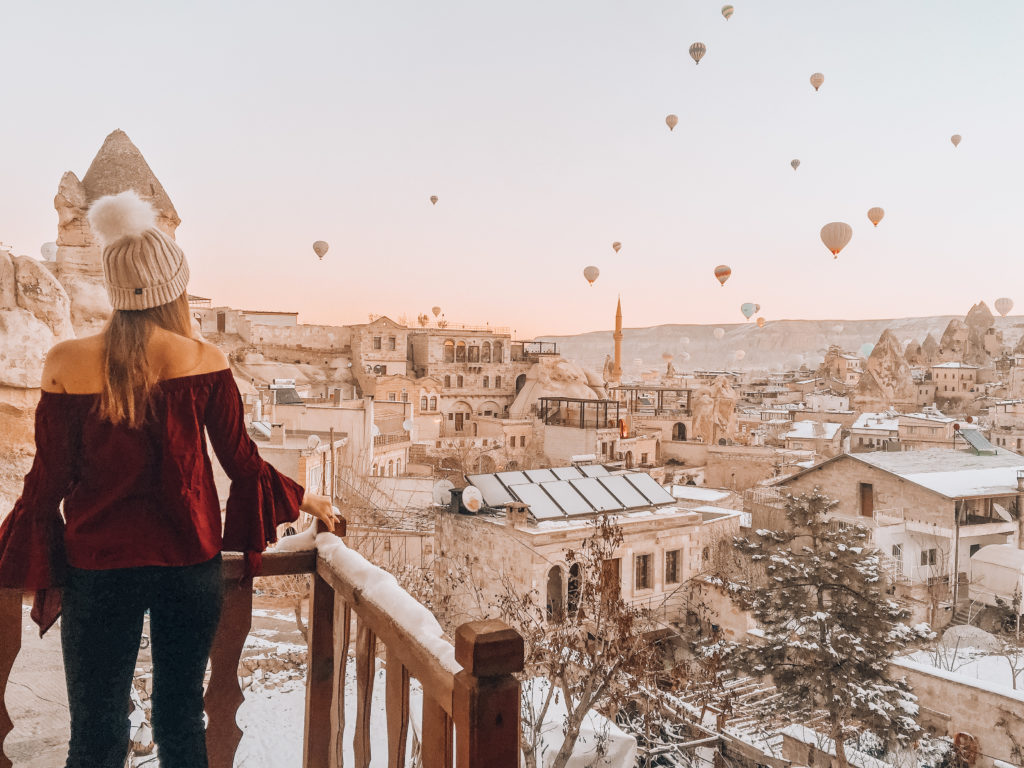 Editor’s note: Our resident wanderer, Haylee, is back and this time she talking all about the magic of traveling in the off-season. She is filled with fabulous tips you won’t want to miss.

As the days become shorter, and the nights become cooler, many bunker down for the Winter with a hot cocoa in hand, in front of a comforting fire. The countdown and planning begin for the next tropical Summer escape, as the northern hemisphere waits out the ‘off-season’.

What if I told you that you don’t need to wait another 365 days to satisfy that wanderlust within.

I like traveling regardless of the season, though I can’t deny that off-season travel has landed a special place in my heart. Sure, a few more layers are required,  but the positives definitely outweigh that.

This Winter, I’ve relished many tourist hotspots that are magnets to people from all over the world during the Summer. It was an entirely different experience to my warmer weather adventures, though the place that stood out the most was Cappadocia, Turkey. Turkey proved in many ways why off-season travel is the way to go. And there were certain aspects in particular that made it a special trip.

Why Travel During The Off Season 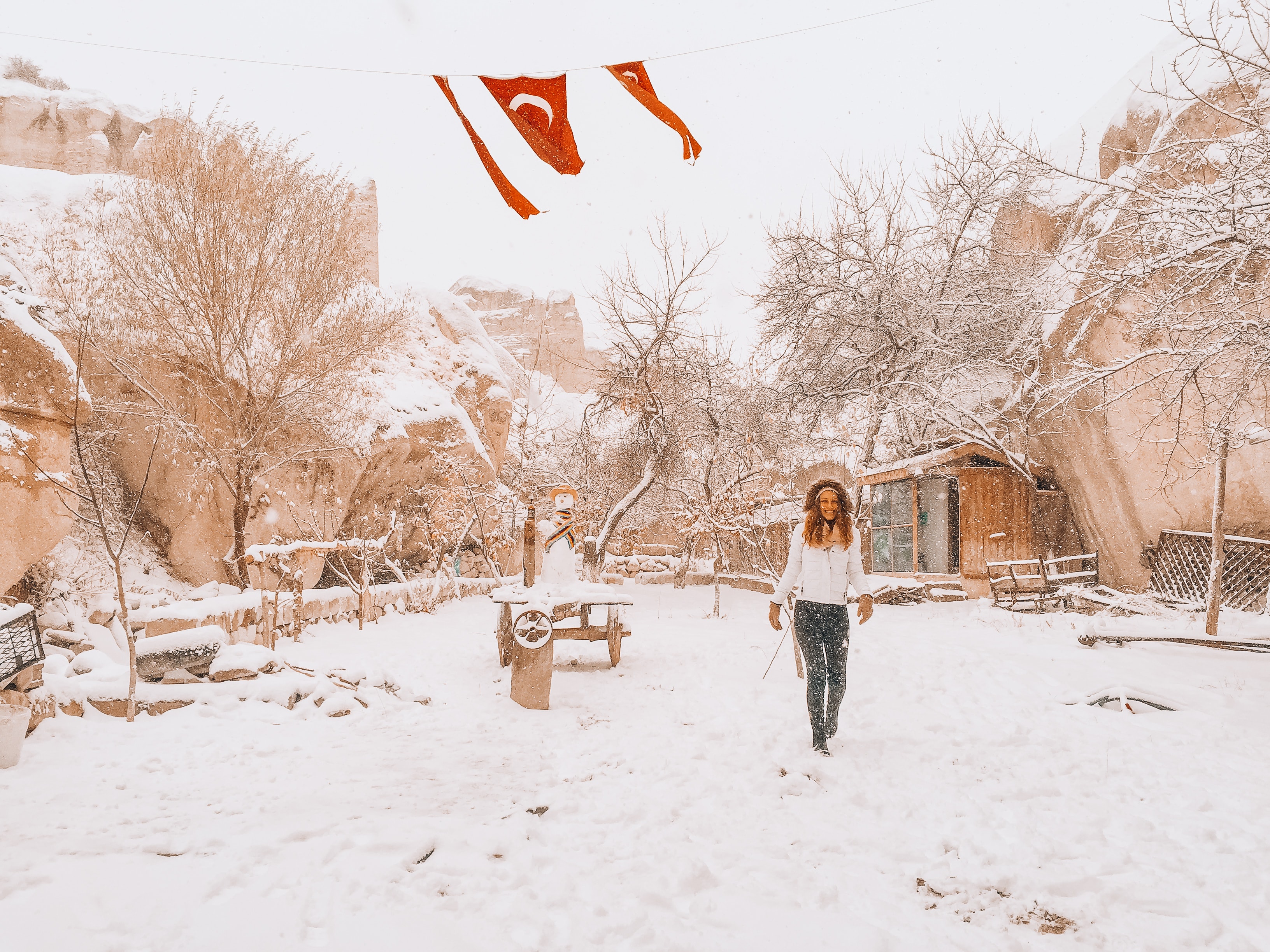 There is a certain spell that Cappadocia photos induce. The unique cave city is commonly known as Cappadocia, though the tourist town is called Goreme. Its distinct fairy chimneys, hot air balloon littered skies, cave houses, moonlike terrain and honeycomb colored sights reel in millions of tourists each year.

Such a surreal location can make for tourist mayhem during the Summer peak season. So my December visit to the mystical Cappadocia gave me my real-life fairytale, minus all the stress of peak season travel. 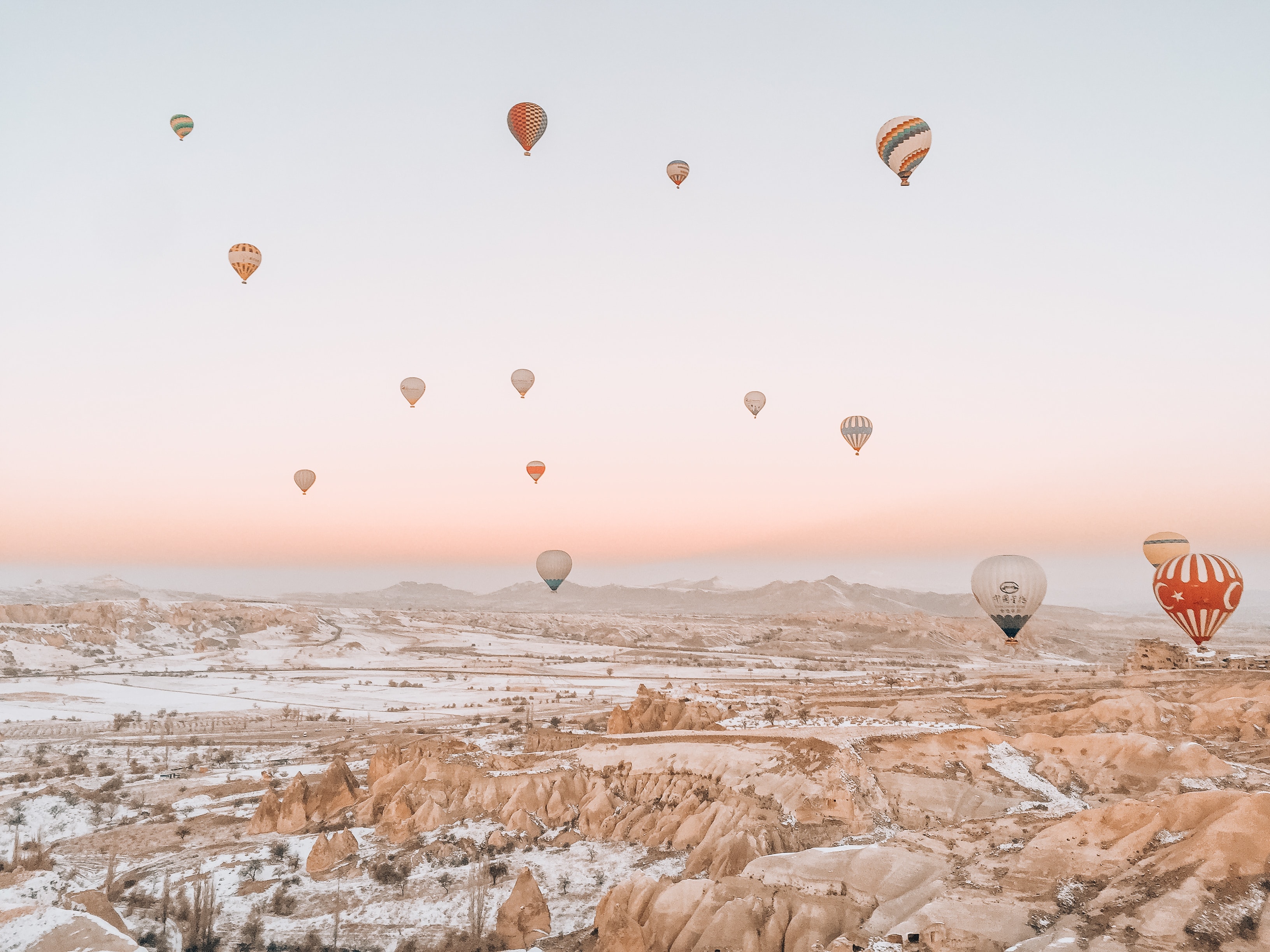 As a chronic wander luster, I had had my eye on Cappadocia for some time. However, being on a backpacker’s budget, I wasn’t sure when I would be able to knock it off the top of my bucket list. While in Istanbul, our research revealed it would be much cheaper than we initially anticipated.

We jumped at the opportunity, and booked our cheap as chips flight to Nevsehir (the closest airport to Goreme). Now I know what you’re thinking – of course, it was cheap staying at a hostel. Though we managed to book Star Cave Hotel for $176, which covered two people for four nights!

That is cheaper than the not so appealing hostels that we stayed in during the Summer. I’ve since checked the price of the hotels in peak season, and our room, for instance, was exactly half the price during Winter! 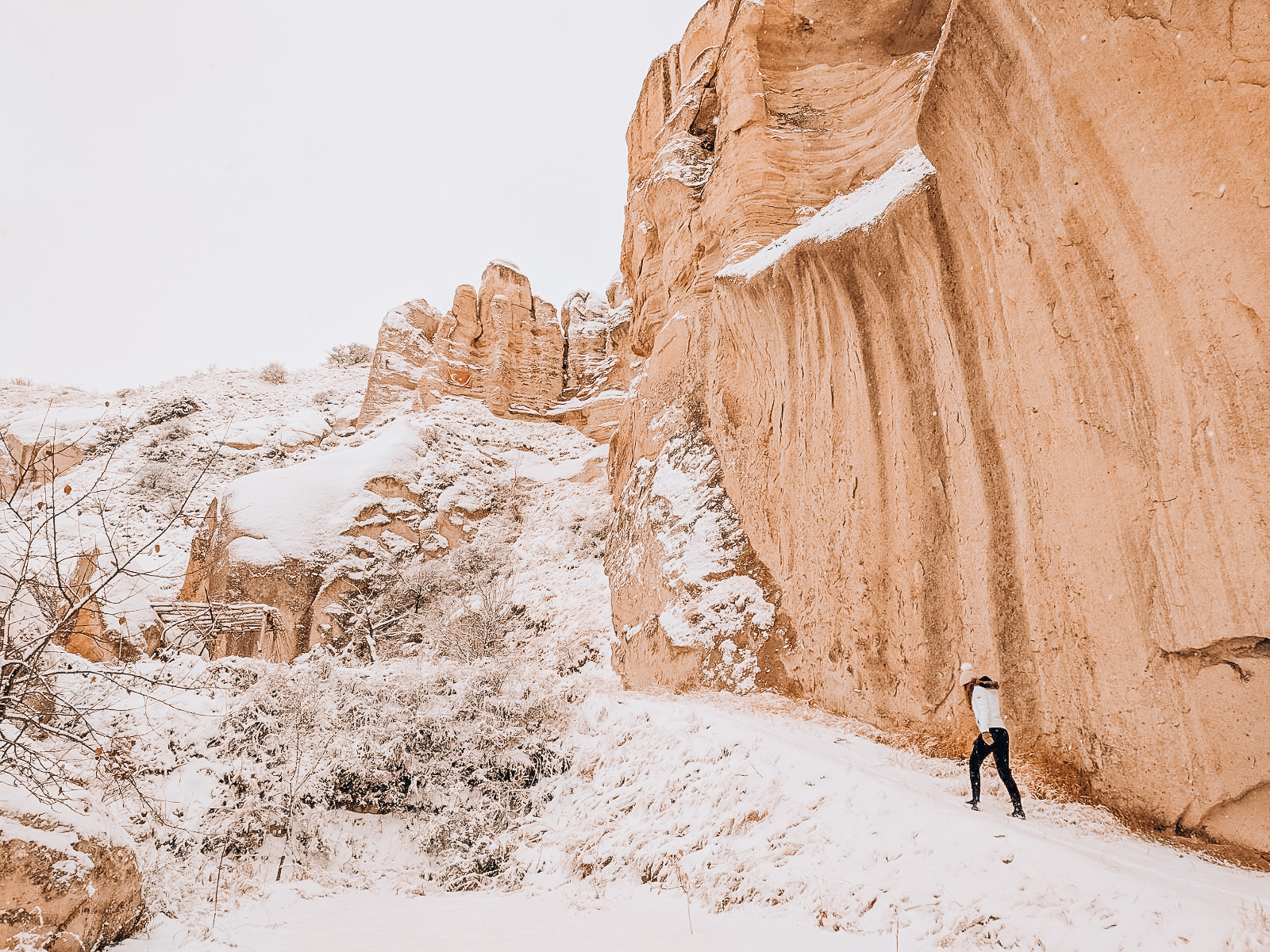 Being such an iconic destination in Turkey, I was at first reluctant to head there during an unpopular time of the year. Though as soon as we stepped off the airport bus in front of our cave hotel, I knew our visit would be nothing short of what Instagram preached. We stayed at Star Cave Hotel, which exceeded our already high expectations. Our Grand Suite at the hotel was adorned with a fireplace, elegant bathroom, and a private balcony that offered a panoramic view of the morning hot air balloons. Star Cave Hotel was within walking distance to the center of Goreme, and conveniently offered a divine home cooked meal for breakfast. The hospitable hosts went out of their way to ensure that we experienced the best of Cappadocia. My travel buddy and I highly recommend this hotel to all travelers.

As we wandered through town on our first day, we were the only ones browsing the shops and perusing restaurant menus. From that day forth, we were rewarded with elegant service, the best seat in front of the fire (because most of the time we were the only table in the restaurant!), and great food. There are many traditional dishes that tantalized our taste buds, though it was the pottery kebab that is an absolute must not miss! The following restaurants are where we scored the best Turkish/ local dishes:

For the foodies out there – you would be happy to hear that many restaurants were offering discounted three-course meals. With the local cuisine being so moreish, this was a big score. 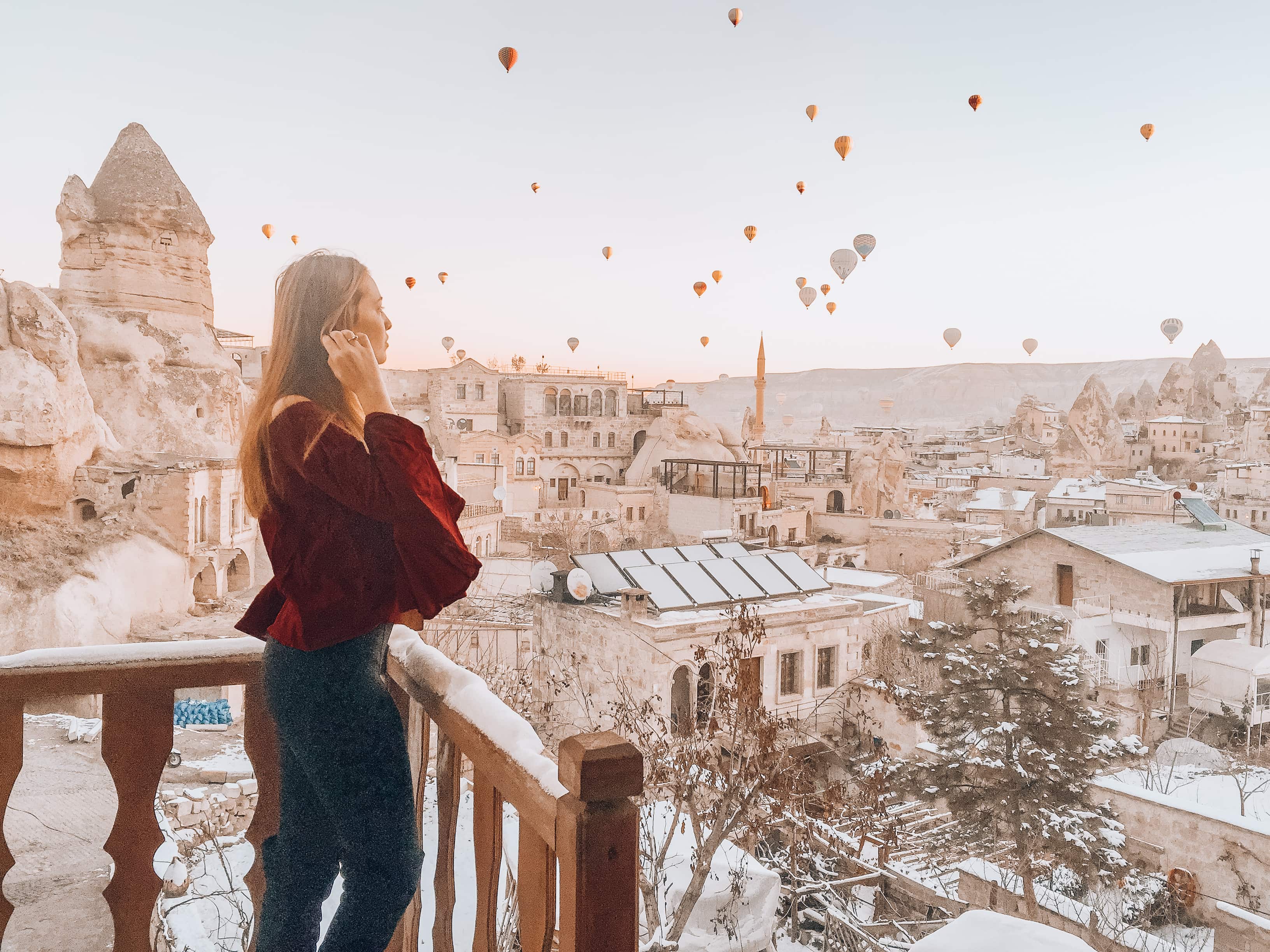 With not many visitors around, we were able to get to know the locals and other guests over a lot of Turkish Cay (tea), and endless food. Before long we were dining out together, attending a party, and having snowball fights! By chatting with others who were also exploring the area, they gave us an insight on some of the hidden gems that they had found themselves.

It seems nowadays everyone on Instagram are ace at finding hidden gems while traveling. While many remain stumped at how others manage to find such dreamy hidden gems. Here are some tips for finding those spots that are so appealing to the eye. 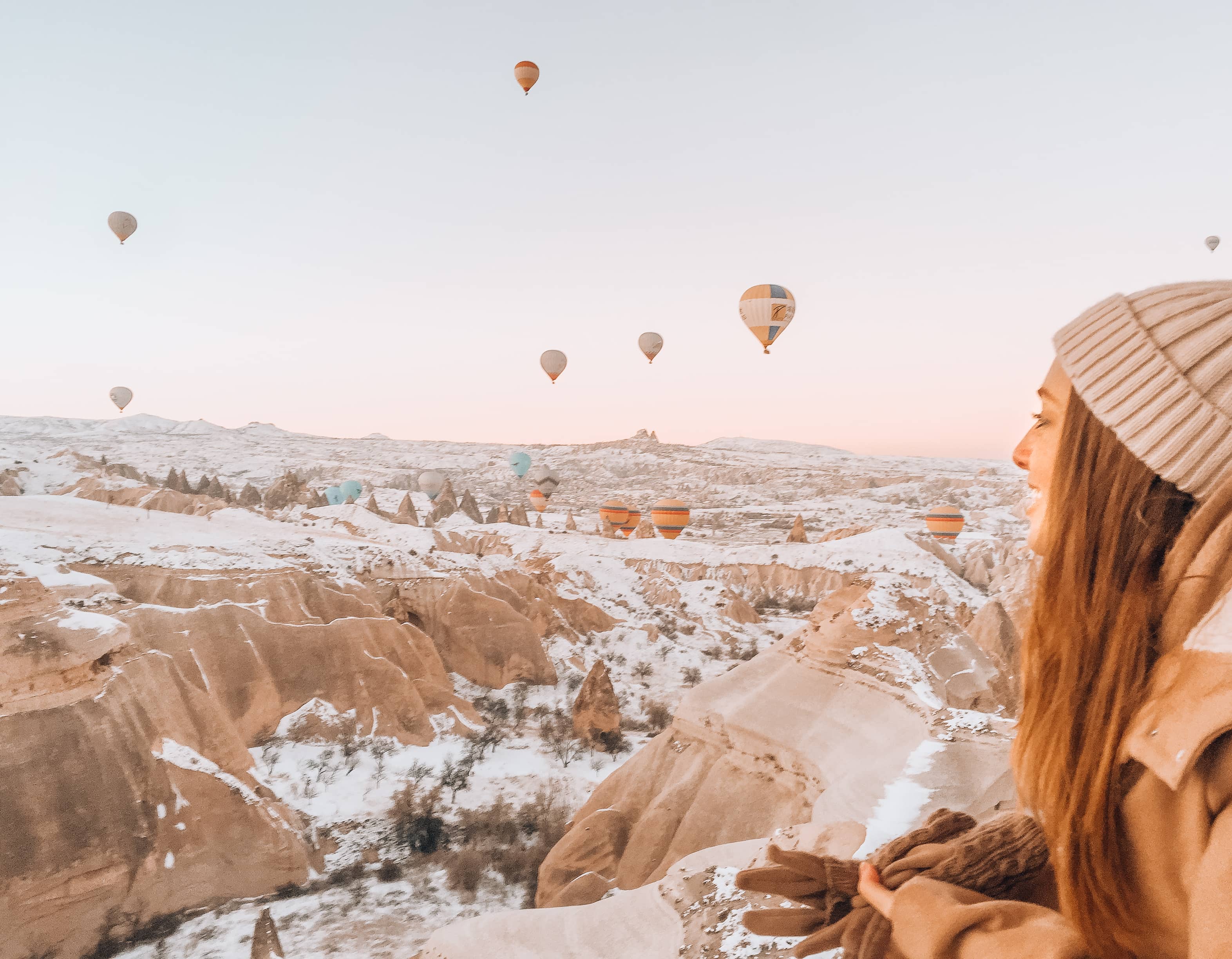 Many wonder – why on earth would someone go to Cappadocia during the opposite weather that those postcard images portray. The truth is, the first two days it snowed over fairy chimneys while we awaited approval for the hot air balloons to return to the sky. On day three, I can vouch that a snow-topped fairytale land made for the most picturesque view from the hot air balloon that I had ever seen in my life. As I watched in awe 5,000ft in the sky, I thanked myself for steering from the norm and traveling during the off-season.

We flew with Balloon Turca, who delivered a lifetime memorable experience. We paid $78 for a 12-person basket which was extremely comfortable. The price included the transfer to and from our hotel, as well as tea and finger food before the flight, and a glass of champagne after landing.

Haylee Forbes is an Australian small town girl who leapt to the other side of the globe to catch a broader view on life. She’s writing her way around the world, to understand and share the lessons of diversity that cross her path.