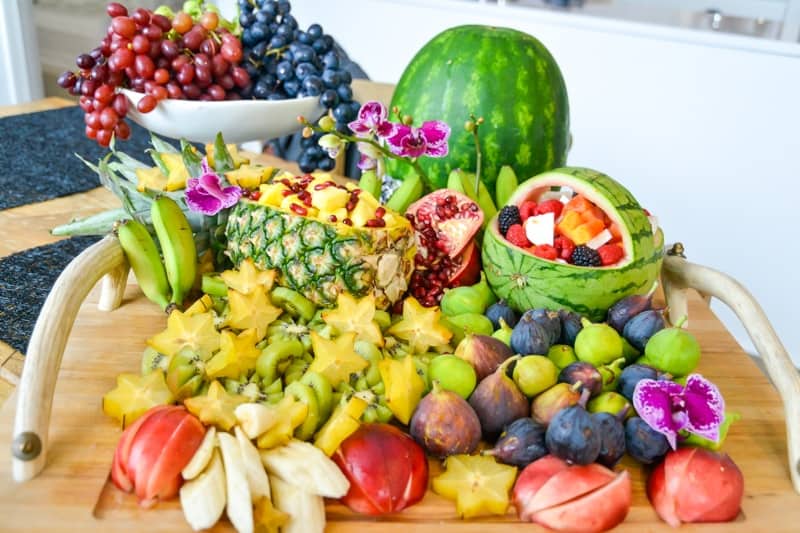 The title of this post may seem simple, but there is a great difference between making a fruit platter and making a fruit platter. There is a bowl of strawberries and then there is a series of colors and layers and textures and shapes that provoke conversation and a gathering of people around it chattering and asking questions. I posted the making of this fruit platter on my Instagram stories over the weekend and I got so many questions that I thought I would share it here and give you some direction on how to go about making something conversation worthy at your next party. So here, my friends, is How to Make a Fruit Platter, or rather how to make an epic fruit platter.

How to Make a Fruit Platter: 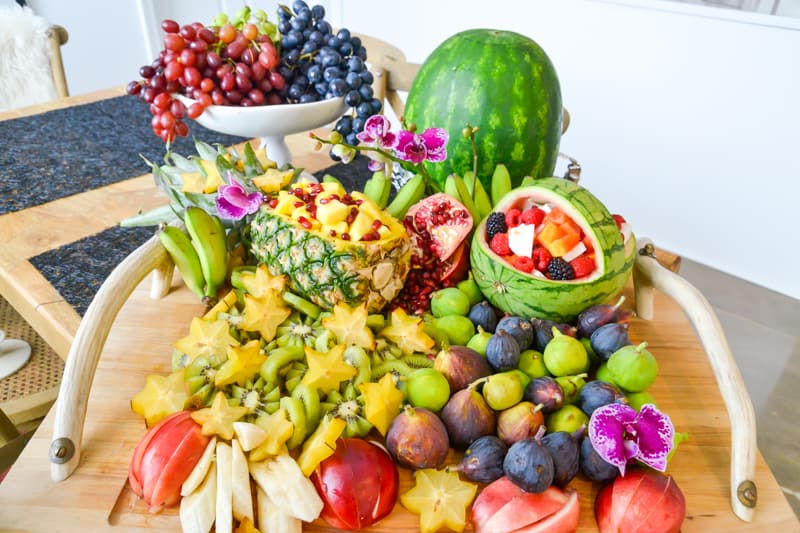 Think About Your Audience

I made this for a baby shower for my friend Meredith, so the first thing to think about is who will be at the party, how many people, and so forth. I wanted it to feel abundant and exciting and lavish and whimsical. Think about your theme a bit here, I went for a more tropical flair and incorporated a few things that you don’t see that often–star fruit and minaiature bananas. 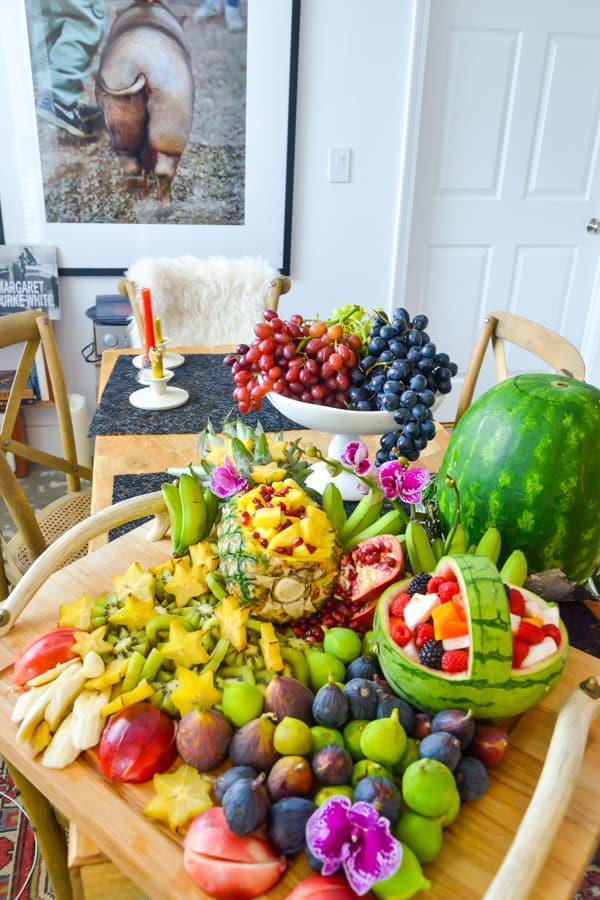 You also want the fruit to be easy to eat and in a reasonable portion size. I added a set of toothpicks so that people could stab anywhere into the platter and pick up something to pop in their mouth right away. 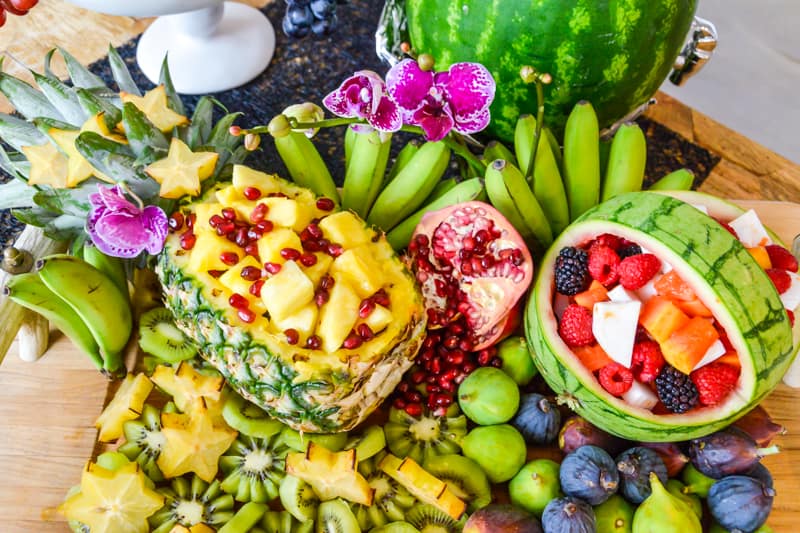 A key part of putting together a platter is creating layers and a focal point. I decided to turn a small watermelon into a basket and a pineapple into a bowl of sorts. They offered a way to serve up small fruits and created a whimsical focal point that was both useful and attractive. Simply scooping out the insides of each one with a paring knife and large metal spoon did the trick. You can then re-use the fruit to serve. 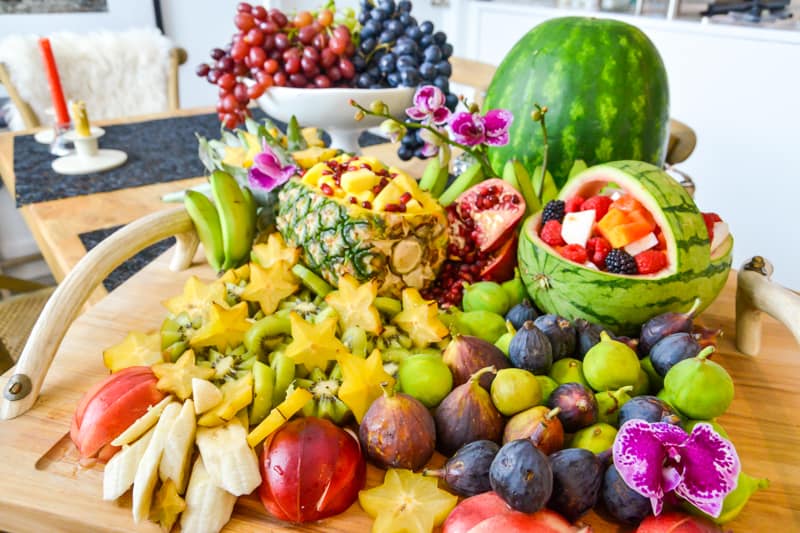 The variation in color is another important aspect because it stimulates the eyes. For example I didn’t just buy grapes and figs, I bought grapes and figs in three different colors so that it gave people a sense of all the types of figs and grapes out there. It made it feel abundant, exciting and less monotonous. 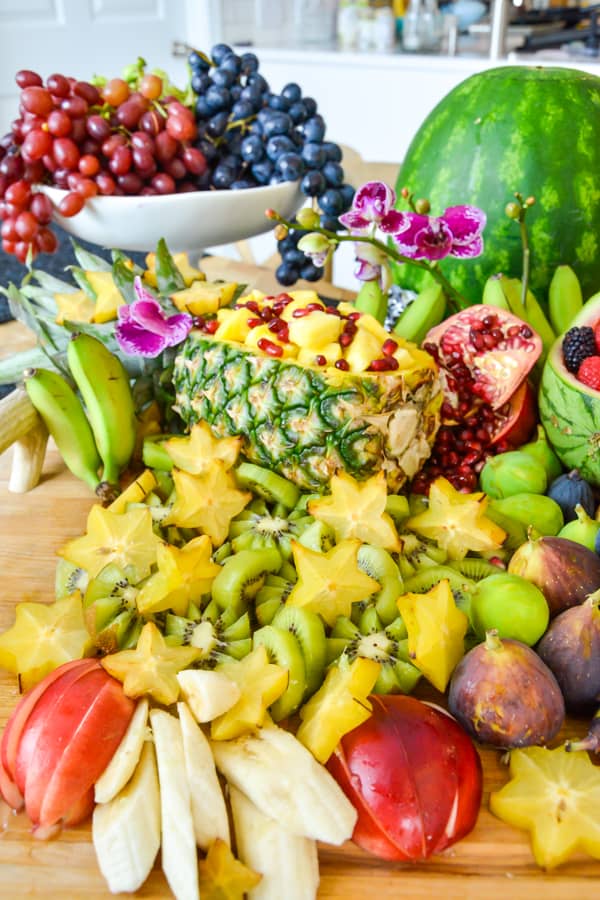 The starfruit in this platter got a lot of people talking. A number of them had never tried it before and were eager to do so. Star fruit has a floral flavor and is very juicy. Add some items that people may not have tried before to make it exciting and build anticipation. 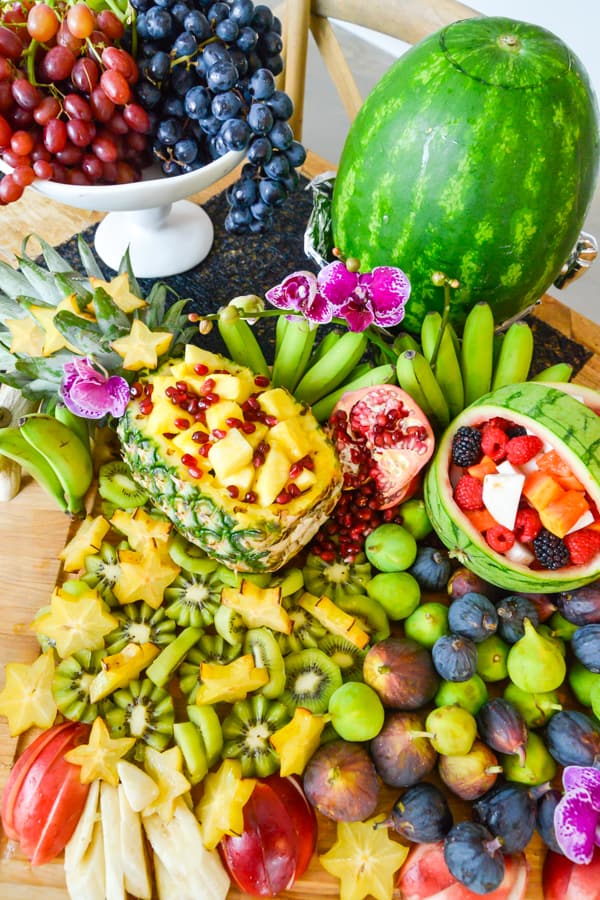 Create A Variety of Shapes

A variety of patterns will also enliven the senses. Some of the kiwis I served skinless and sliced but others I cut in half and created a triangle pattern by cutting a ‘V’ shape along the edges. It isn’t especially time consuming and adds a visual pattern that makes the display more interesting. 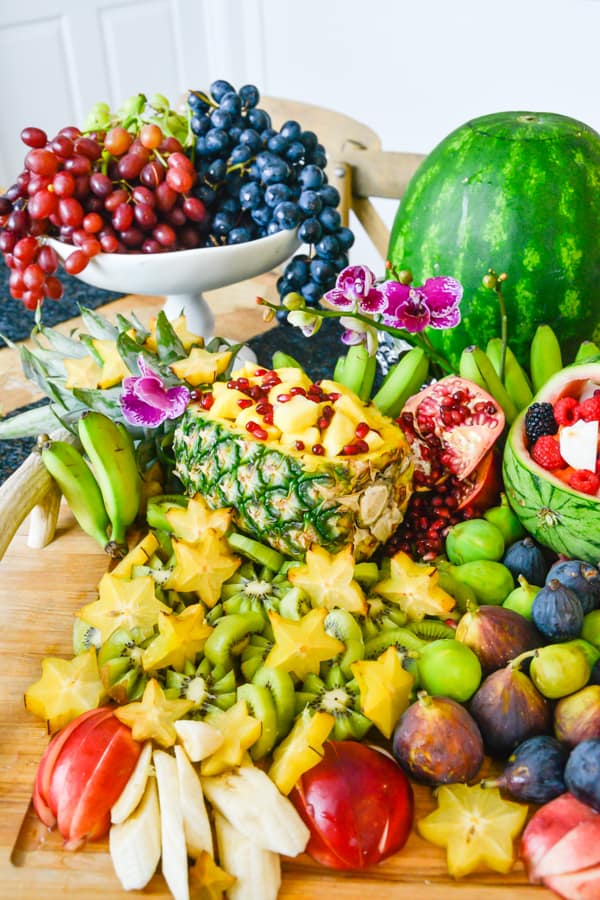 Create The Impression of Abundance

When I split open the pomegranate I wanted to make it feel as if it was spilling out onto the platter. So I purchased additional pomegranate seeds that are sold in a container in the produce section and added them to the split pomegranate to create a cascading visual effect. I also tossed them in with the pineapple chunks to create color dimension and break up the solid yellow. 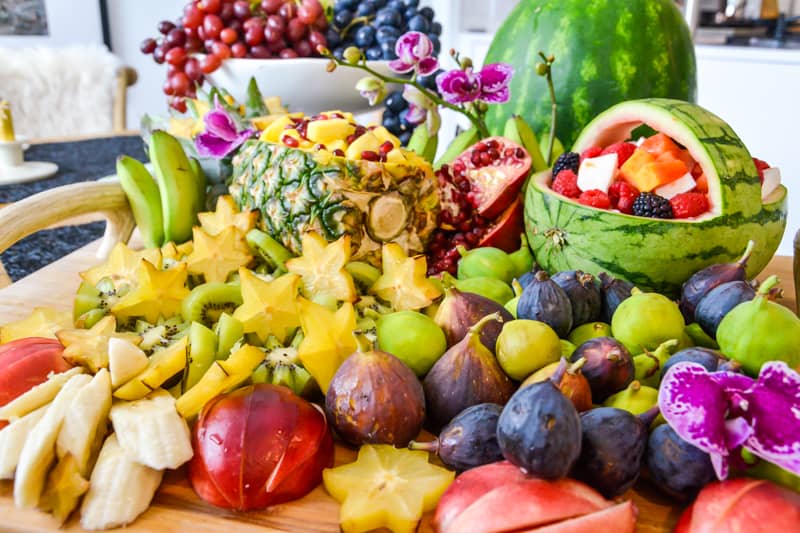 Adding a series of orchid flowers and stems made the display feel tropical and alive. Adding elements of nature to most things gives it an organic effect that is important in my opinion and reminds us where food comes from. Some stores will sell single orchid stems in the flower section, but you could also use nusturtium flowers or a variety of other edible flowers like what I’ve written about here. You don’t have to just use flowers, there are a whole variety of other edibles right in your back yard. 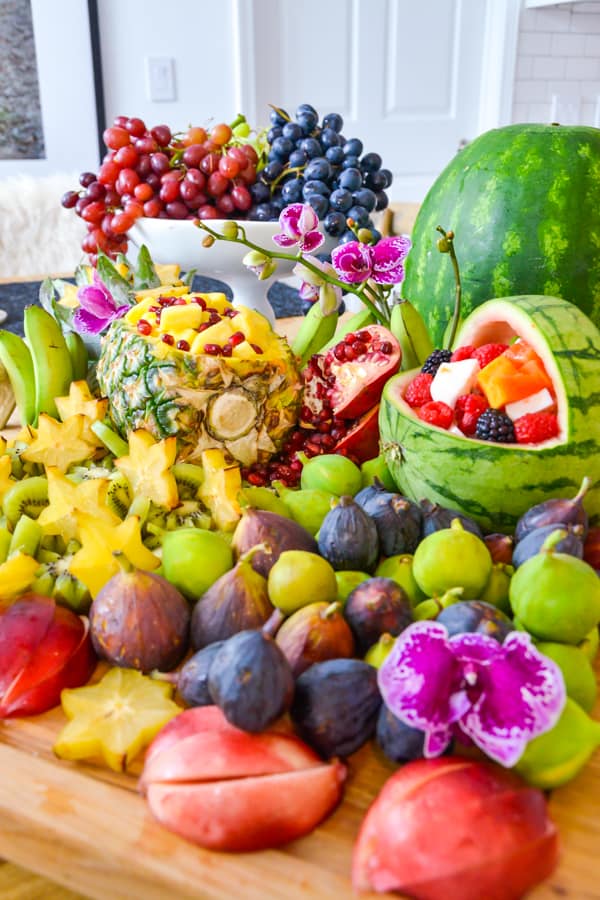 The large watermelon you see in the background is a watermelon keg that went with the drinks display at the party. If was filled with watermelon juice which people mixed with champagne. You can learn how to make that right here.

Enjoy my friends! And let me know what other tips you have and how you like to make your party platters in the comments or on social media.