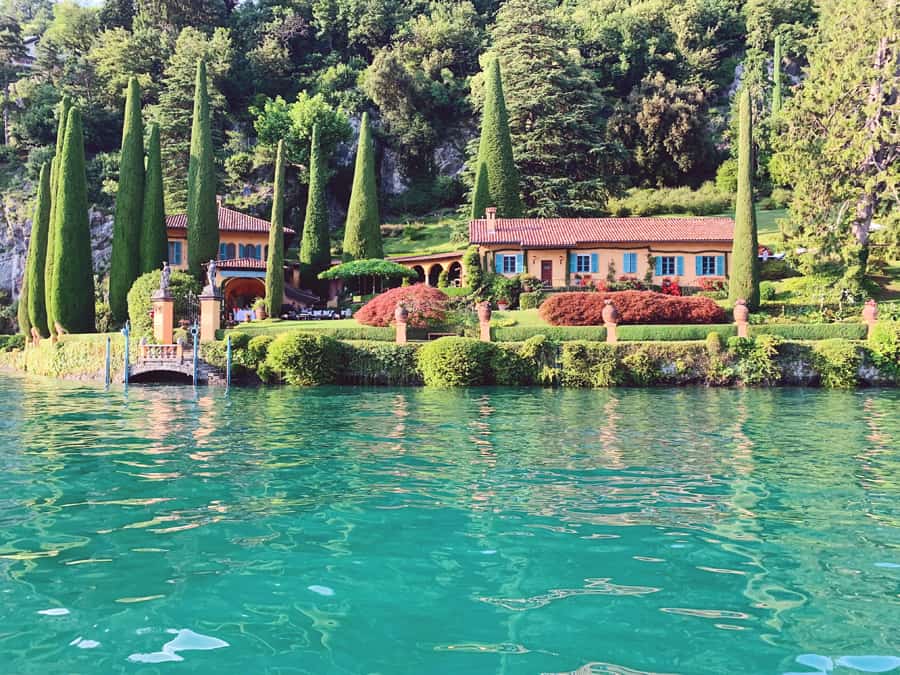 If you follow me on Instagram, you know well that I recently took an Italian road trip. I started off in Lake Como which was like having dessert first. One of my favorite things that we did in Lake Como was rent a boat and tour around the lake to see the amazing villas and towns. You can see much of the lake in 2 hours and it is magic. I posted a full video on my YouTube Channel, and you can see I Giardini di Villa Melzi, Villa del Balbianello, the private Villa Balbiano in Ossuccio owned by Michele Canepa, Villa La Cassinella, in Lenno owned by Richard Branson, along with Villa Gaeta owned by Robert Pattinson, and villas in Versace and George Clooney’s neighborhood, all on Lake Como. Keep scrolling for photos and details of the villas along with the video.

Just up past Menaggio is a castle like structure called Villa Gaeta. It has had many lives, at one point a hotel, then converted into apartments, and then in 2006, the villa was used as a location for the shooting of the James Bond movie Casino Royale. The locals were all buzzing that Robert Pattinson had just bought it.

Located in the small town of Ossuccio, this is one of the most ancient villas on Lake Como. It has changed hands many times, most recently in 2011 to a mystery owner. Rumor has it that it can be privately rented after an extensive restoration.

Bellagio has the best nightlife on Lake Como and is the best place to stay if you’re only there for a few days. It also boasts this stunning villa open to the public for garden tours. The owner won’t allow any tours of the interior, however, his attempt to hold out from the rapidly changing fabric of Lake Como.

This villa, once a Franciscan monastery, was built on the tip of the peninsula of Dosso d’Avedo in the 13th century. A number of feature films have used the villa, including A Month by the Lake, His Demise, Casino Royale, and Star Wars: Episode II Attach of the Clones.

Only accessible by boat, this villa is rumored to be owned by Richard Branson, but is also available for rent according to its website, complete with a cinema and 24-carat gold plated pool tiles.

Varenna is quieter than Bellagio and hosts Villa Cipressi, now a hotel with a botanical garden and the best Aperol Spritz in Italy, in my humble opinion.

Be sure to subscribe to my YouTube channel for more from my #ModernPioneering series. And be sure to leave a comment on the channel, I love to hear from you.